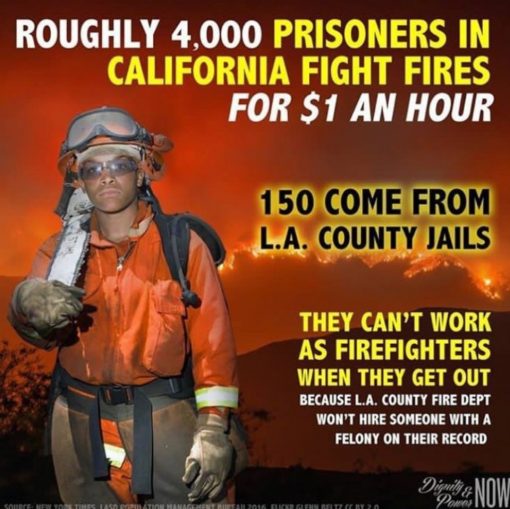 Nov. 16 — Over the past two decades, forest fires have become a problem that increasingly impacts the health and lives of Californians. Currently, there over 20 active fires blazing in California according to the CAL FIRE website, fire.ca.gov/general/firemaps.

Some are referred to as National Forest fires, which are a natural, annual occurrence in California after a long, dry summer.

The abundance and frequency of the current spate of fires, however, can be seen as the result of anarchic capitalism and the drive for profits in real estate. And the serious consequences in death and destruction can be blamed on the lack of social planning to confront emergencies, complicated by an ultraright president.

The fires themselves are the direct result of overdevelopment of formerly unsettled parts of California — for divergent yet related reasons. In Southern California, the Woolsey Fire has largely consumed high-priced real estate in beautiful, pristine areas sold to people with money.

The Northern California Camp Fire, on the other hand, has affected many poorer and older Californians — some of whom have been pushed out of overpriced urban areas: in other words, due to gentrification.

The Camp Fire, one of the deadliest fires in California history, has proven tragic. As of the evening of Nov. 16, its official death toll was 71, but the number of people reported missing was 1,011 — given that many of the elderly or disabled people have no way to escape. Located about 60 miles north of Sacramento, the Camp Fire has incinerated the entire town of Paradise, destroying more than 12,000 structures and 150,000 acres.

The strong, extremely dry, downslope “Santa Ana winds” that originate inland have spread the fire’s smoke, which can be seen hundreds of miles in multiple directions and has made the already poor air quality much worse.

People living hundreds of miles away from the fires are breathing smoke-laden air, which is dangerous especially for people with heart disease, asthma or other respiratory ailments. The authorities advise people to stay indoors or limit outdoor activity.

Thousands of people are living in tents, after having to evacuate from their homes, distraught, losing everything they own. They do not know when they can return to their homes to salvage what is left, if anything.

In the midst of all this suffering, the president tweeted that the state of California has mismanaged its forests, which caused the fires. Undoubtedly, Donald Trump is jabbing at California’s government, which is progressive compared to him. The federal government, however, owns 98 percent of the forestland in California and is responsible for its mismanagement.

As usual, the Trump administration wants to avoid paying the federal emergency funds for disasters of this sort. Instead he uses the funds to deploy federal troops to the now-militarized Southern border.

Social activists and even politicians ask why Trump has not sent more firefighters, rescue and health care workers to help people devastated by the fires. Instead, much of the firefighting is left to the most alienated sector of Californians, its incarcerated population.

The California Department of Corrections and Rehabilitation  program pays inmates $1 to $2 a day to fight active fires, plus time off their sentences. Over 2,500 prisoners are risking their lives battling fires across the state. (tinyurl.com/ydbus2at and tinyurl.com/ydy9colb)

By using this “volunteer” prison labor, the state says it saves $90 million to $100 million a year. It also claims to help inmates learn new skills while working in a team environment. Of course, no jobs in this field are guaranteed for ex-prisoners.

Trump continues to deny that human behavior produces global warming and that this is a major cause of more incidences of drought. The vegetation becomes dry and flammable, providing more fuel for fires. Poorly laid electrical lines may start a fire and then Santa Ana winds spread it.

California wildfires are symptoms of a crisis in capitalism.  Exploitation and disregard for the land and resources and for poor and working people have created this annual terror residents experience.

Yet, the most oppressed have already provided the answers.  In California, vacant homes outnumber the homeless population.  Activists demand that we fill the homes we have instead of feeding the real estate bubble.

Activists also call for paying the workers — the poor and incarcerated firefighters — the wages they deserve instead of exploiting their labor and costing them their health and ultimately  their lives.

Lastly, activists want to create an infrastructure that is sustainable and lowers our carbon footprint, instead of creating more landfills that fill our atmosphere with methane gas, which increases the likelihood of these fires.