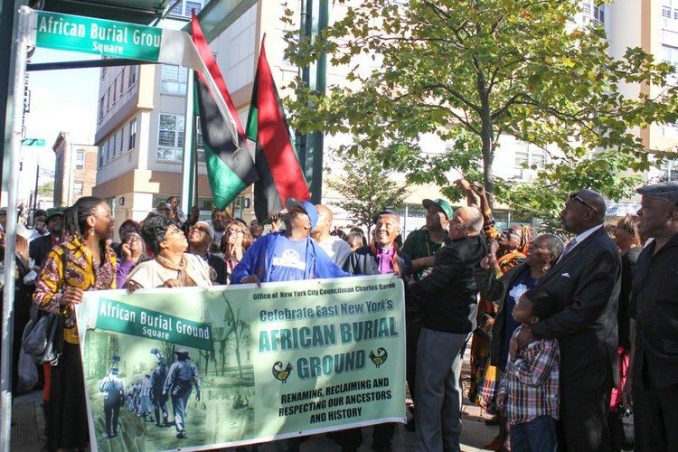 Amid the spate of hate crimes in the U.S., on Nov. 1, in broad daylight in New York City, the African Burial Ground National Monument was defaced with the racial epithet “kill the N*****s” (the N-word) written across it. The burial ground is a sacred resting place of enslaved Africans.

New York was the second-largest U.S. slaveholding city — enslaved Africans built the city. For centuries the remains of thousands of enslaved and free Africans were entombed underneath the city. They were not allowed to be buried in white-only church graveyards or within the boundaries of the European settlements.

The 300-year-old grave site was discovered in 1991 when archaeologists unearthed hundreds of skeletal remains that they sent to Howard University in Washington, D.C., for examination. In 1993, the burial ground was designated a NYC Historical Landmark.

On Oct. 1, 2003, the remains were returned to NYC and re-interred in the African Burial Ground at the former slave market site near Wall Street. Their return was marked by a two-day ceremony, where tributes were paid to the ancestors.

In 2006, the African Burial Ground was declared a National Monument. It is the oldest and largest African burial ground in the U.S.

Within days of the Nov. 1 desecration of the monument, outraged activists, civic leaders, and state and local elected officials held a press conference to condemn the racist vandalism. They called for the mayor and governor to make an official statement denouncing the incident.

They insisted that police precinct and federal officials do a full investigation and called for the immediate release of security camera videos and arrest of the suspect. Overall, they demanded respect for African-American people and their ancestors, stating that ignoring the suffering of the people is a gross injustice.

Speaking about the hateful act, City Councilperson Jumaane Williams, said, “The African Burial Ground stands as a reminder of the racist history of our city that we might otherwise too easily forget, of an entire people enslaved and subjugated even in death. These things and these issues have never gone away. But we are at a time where it is at a fever pitch. It shows that we have not moved as far past that history as many would like to believe.

“Hatred and bigotry have never been erased from our country or city, only retreating into the shadows at times. I call on members of all communities to stand together in condemnation and defiance of hatred and the forces that propel it.” Hate is still much alive!

The African Burial Ground stands as a tribute to those who were enslaved. It serves to educate current and future generations about the extreme sacrifices and profound contributions made by enslaved African-American descendant communities to the building of NYC and the entire country. In the face of current and future challenges, it is vital to protect this legacy for future generations.