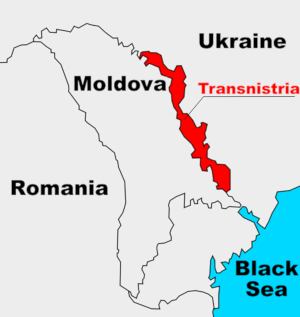 On the morning of Nov. 7, dozens of communists — young and old — gathered to lay flowers at the monument to V.I. Lenin in Tiraspol, Transnistria, to mark the 101st anniversary of the Bolshevik Revolution in Russia, the world’s first successful working-class socialist revolution.

Similar activities were held in thousands of cities throughout the countries of the former Soviet Union. But the gathering in Tiraspol had special meaning, and for its participants took special courage.

Just five days earlier, the leader of the Communist Party of Transnistria, Oleg Horzhan, was sentenced by the republic’s Supreme Court to 4 1/2 years in prison and a hefty fine. The authorities then banned the traditional Revolution Day rally and march in the capital’s central square, where Lenin’s statue stands watch. Revolution Day, Nov. 7, is still an official holiday in Transnistria.

Transnistria (also known as the Pridnestrovian Moldavian Republic) is an “unrecognized” state in Eastern Europe, much like the nearby Donbass republics of Donetsk and Lugansk.

Transnistria’s people proclaimed independence from the former Soviet republic of Moldova in 1992, when they rejected the capitalist counterrevolution in the USSR and the abandonment of Soviet economy and culture. The Communist Party of Transnistria has been a leading political organization in the republic since its founding.

Despite their heroic determination, the people of this small, isolated state could not on their own ward off the ravages of capitalist encirclement and the counterrevolutionary tide. The republic was forced to make major political and economic compromises to maintain its existence. It has had to rely on military protection from capitalist Russia to ward off repeated threats from neighboring Moldova and Ukraine.

The new authorities banned the traditional May Day demonstration this year. In response, communist leader and parliament member Oleg Horzhan called for a protest rally in the central square of Tiraspol on June 2. The government organized provocations and arrested many people.

Horzhan went to the police station to demand the release of those arrested. There he was roughed up and threatened by the cops. On June 6, Horzhan was stripped of his parliamentary immunity and arrested. He was held in jail for five months throughout his trial.

In its statement on the verdict, the Communist Party of Transnistria said: “Despite the fact that the judges were forced to admit the majority of the acts which Horzhan was accused of were lies of policemen or fabrications of the employees of the Investigative Committee, they sentenced the Transnistrian Communist leader to almost the maximum possible.

“The order of the authorities to eliminate their political opponent obviously had to be carried out, and therefore, the court did not stint on punishment, although the only fault of Oleg Horzhan was that he bumped into a police officer who suddenly got in his way on the premises of the police department.

“According to the ‘victim,’ he experienced ‘physical pain,’ although no injuries were found in his forensic examination. It was this episode that the court regarded as ‘violence against a representative of the authorities’ and imposed a sentence of 4 years 6 months of imprisonment in a penal colony.

“Despite the harsh, politically motivated decision of the court, Oleg Horzhan told his supporters that the authorities would not succeed in breaking him, and he would continue the fight against the anti-people regime both in prison and afterward. His lawyers, in turn, announced that in the near future they would appeal the unjust sentence.”

Grigory Petrenko, leader of the communist Our Home Is Moldova party, called for freedom for Horzhan, whom he called “brave, principled, a real fighter.”

Petrenko was jailed along with several of his comrades in 2015-16 after leading an anti-oligarchy protest in the Moldovan capital, Chisinau. He and his family were later forced to seek asylum in Germany.

“Today’s regimes in Transnistria and Chisinau are twins,” Petrenko said. “Both are ruled by oligarchic mafias that interact perfectly with each other. … The status quo provides them with uninterrupted work for their joint business projects.”

“Horzhan’s imprisonment is another link in the chain of persecutions of the communists of Transnistria,” declared the United Communist Party of Russia, … using anti-communism and wiping the Soviet period from human memory to serve the purposes of their own historical justification.

“Today, Ukraine leads the way on this path, where communists are under an actual ban. It is shameful that the Transnistrian leaders copy the worst examples of the political practices of their neighbors.

“The United Communist Party calls upon fraternal communist parties, and all progressive organizations that stand for democracy and social justice, to express solidarity with the communists of Transnistria.

“Free Oleg Horzhan! Stop the persecution of the communists!”