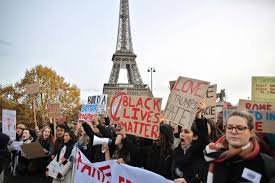 In Paris, on the weekend of the 100th anniversary of the armistice that ended the first devastating imperialist world war, the current overlords of world imperialism showed both their faces. Both were ugly and dangerous, although one was covered with more deceptive smarm.

The visible danger was the current U.S. president, though at the Paris meetings he appeared moody and isolated. Unfortunately for the world, he still has powerful allies inside and outside the U.S. ruling class.

He has been speaking up for “nationalism” lately — meaning racist, white nationalism. This accompanies his anti-immigrant rants and constant insults toward women.

While he seemed sullen in Paris, even skipping some of the usual ceremonies, he has like-minded “nationalist” thinkers in Poland, Hungary, Ukraine; in the ultra-right parties like the National Front in France and the AfD in Germany; and even in the current Italian coalition regime that is a hotbed of anti-immigrant bigotry.

At home, despite setbacks in the midterm elections, he still mobilizes his reactionary base.

So much about this U.S. president is hateful and needs fierce opposition that people might underestimate the dangers coming from the overlords in Europe and the rest of his class in the U.S.

The other face of imperialism

At the Paris meeting, another face of imperialism was personified by the French banker-president Emmanuel Macron, the “globalist.” It’s also the face of Germany’s Angela Merkel. They and their counterparts in the U.S. establishment — who mostly, but not all, are among the leaders of the Democratic Party — say they are against nationalism.

They look to World War I as a lesson in the dangers of nationalism — that is, the dangers to the ruling classes they represent.

Before that war, mass slaughters initiated by imperialism and capitalism had taken place mostly in the colonies. Tens of millions died in British-controlled India, Belgian-controlled Congo, German-controlled Namibia, Dutch-controlled Indonesia, and in the many French colonies of Indochina and North and West Africa.

The U.S., a fledgling imperialist power at that point, had bloodied its hands in the slaughter of enslaved and Indigenous peoples, and of those in the Philippines, Cuba, Hawai’i and Puerto Rico.

But during the first world war — when the big imperialist powers fought each other for the nationalist aim of controlling more colonies — tens of millions died in Europe itself. War and oppression came home to them, including a flu epidemic that spread through wartime crowding and hardships to kill tens of millions more.

Then, after years of suffering through the Great Slaughter that was World War I, the war was ended by the Russian Revolution. This workers’ and soldiers’ revolt not only deposed the old tsarist empire, it ushered in a socialist revolution and seized the property of the ruling class in Russia.

Revolutionary movements also seized power for a short time in Hungary and in parts of Germany. They were defeated with blood and iron by the old rulers, but they left the capitalist ruling classes of those countries and all their neighbors terrified of what the workers could do. From 1917 to 1991 that changed history.

So when today’s “Great Powers” hold a so-called peace conference in France, it is the utmost of hypocrisy. The “globalist” forces have no intention of allowing peace for the oppressed nations and peoples of the world — for Yemen, for Syria, for Libya. Macron, Merkel and the others may look better than Trump, but their message is really this:

“One hundred years ago, we, the rulers, learned that if we are too nationalist we can wind up fighting each other, and the workers and peoples we oppress can take advantage of that. They might even overthrow us. So we have to work out among us how to peacefully divide what we steal from the masses of people of the world.”

Both the nationalist and globalist factions within the world’s ruling classes are enemies of the people.

As we mobilize against Trump and the ultrarightists who support him, we must remember that the enemy is the entire possessing class of global billionaires and multimillionaires and their paid agents and representatives.

This entire class, including Trump, must be stopped. They must be countered at every opportunity.