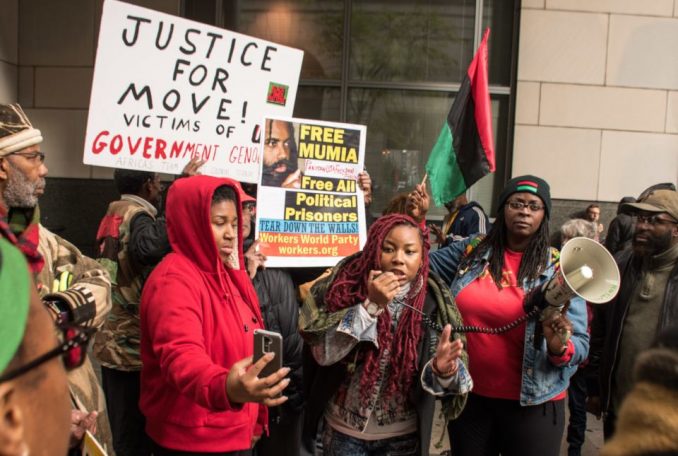 As supporters demonstrated in the streets outside Philadelphia’s Criminal Justice Center on Oct. 29, inside the courthouse attorneys for political prisoner Mumia Abu-Jamal presented new arguments of substantive bias by former District Attorney Ronald Castille as grounds for granting Abu-Jamal’s petition.

Abu-Jamal’s initial petition, filed in August 2016, is based on the 2016 U.S. Supreme Court ruling in Williams v. Pennsylvania that found due process was violated when Castille participated in the Pennsylvania Supreme Court’s consideration of William’s appeal in a capital postconviction case. Castille, in his previous position as district attorney of Philadelphia, had approved decisions to seek the death penalty. The SCOTUS ruling established that a petitioner is entitled to relief when a reasonable observer could conclude that a judge harbored disqualifying bias against the petitioner.

The petition was first heard on April 24, 2017. Since January 2018, when Philadelphia’s current district attorney, Larry Krasner, took office, six additional hearings have been held. At each the Commonwealth has sought to deny Abu-Jamal’s petition, claiming “no evidence exists” of Castille’s direct involvement in Abu-Jamal’s case while he served as district attorney.

The lawyers’ new amendment is based on two pieces of evidence that came to light during searches of hundreds of boxes of files looking for a letter written by DA Castille in June 1990 to then Gov. Robert P. Casey. An initial search of files in September 2017 uncovered a draft for a letter written on Castille’s behalf by former Deputy DA Gaele Barthold. Her June 1, 1990, memo to Castille states, “As discussed, I have drafted a letter to Governor Casey for your signature, Ron, requesting that death warrants be issued in appropriate Philadelphia County death cases.”

In his June 15, 1990, letter to Casey, Castille used Barthold’s draft but inserted a paragraph urging Casey to sign death warrants to send a message to “all police killers.” At her recent deposition, Barthold confirmed that the paragraph concerning “cop killers” was not in her draft and was not in language she would have used. While the Commonwealth uncovered Barthold’s draft, which refers to a copy of Castille’s letter being attached, they maintain that Castille’s final signed letter to Casey cannot be found.

Castille’s letter referred to a list of capital cases then before Casey. Because he had not exhausted his appeals before the DA’s office, Abu-Jamal’s case was not on the list. However, his attorneys hold that Castille had to have examined the status of Abu-Jamal’s case as of June 15, 1990, to determine that it was not ready for a death warrant. They charge that this reflects substantial, personal involvement in a critical decision in Abu-Jamal’s case.

A few days before the Aug. 30 hearing regarding the status of their search for the missing letter, the Commonwealth notified the court that they had also uncovered evidence of communications between DA Castille and former Pennslyvania State Senator Michael Fisher regarding passage of legislation to further restrict state appeals of death penalty convictions.

The evidence was a letter, on letterhead identifying Ron Castille as district attorney, from then Philadelphia Assistant District Attorney Kathleen McDonnell sent “pursuant to Sen. Fisher’s request, in order to provide him with, the current status of certain death row inmates.” Abu-Jamal’s name was the first of nine capital defendants.

As with the Barthold memo, the “request” that gave rise to McDonnell’s letter was not provided, and the Commonwealth could not verify to whom Fisher addressed his request. Abu-Jamal’s attorneys charge that if Fisher’s letter was addressed to Castille, it would be additional evidence of his personal significant involvement. The Commonwealth claims that, even after searching more boxes of files, it cannot locate the request letter.

The attorneys further argued that there can be little doubt of Castille’s ardent support for capital punishment and his frustration that it wasn’t being implemented during his term as DA. According to their new amendment, “Fisher had introduced a new death penalty statute designed to bring capital punishment back to Pennsylvania after an earlier statute had been declared unconstitutional.”

The amendment also notes that “on Sept. 23, 1988, DA Castille wrote directly to Fisher urging passage of an amendment to the death penalty law and conveying his fears about the impact of Mills v. Maryland.” Castille feared that “Mills may lead to the vacating of scores of death penalties.” Abu-Jamal’s case not only contained a Mills claim — it became the basis for his eventual sentencing relief.

Failure to secure evidence is grounds for appeal

Abu-Jamal’s attorneys have argued that despite the Commonwealth’s failure to find missing records, “The newly discovered evidence in these proceedings establishes that a reasonable observer could conclude that Justice Castille harbored disqualifying bias against Mr. Abu-Jamal as a person convicted of killing a police officer.”

Speaking in court today, Samuel Spital again raised that the Commonwealth’s proven inability to secure evidence favorable to the defendant constitutes adverse interference that arises under the state court’s spoliation doctrine. The Pennsylvania Supreme Court holds that “spoliation of evidence is the non-preservation or significant alteration of evidence for pending future litigation.”

Noting that Abu-Jamal and the DA’s office have been involved in postconviction litigation for most of the last 30 years, Spital stated that the Commonwealth had the duty to preserve these documents, yet failed to do so. The amendment also notes that, after having obtained a two-month continuance and assigned a paralegal to work full-time to search for it, the Commonwealth has recognized that the missing memo is central to this case. To date the Commonwealth admits that many boxes of files remain unaccounted for.

Abu-Jamal’s case was the most important capital case in Philadelphia’s history. It involved the killing of a police officer, allegedly by a former member of the Black Panther Party. The case remains important, not just to Philadelphia, but to an international liberation movement.

To argue that DA Castille was wholly uninvolved in the decisions around the response to Abu-Jamal’s first appeals lacks credibility. During Castille’s term as DA, his office aggressively fought Abu-Jamal’s initial appeals. As DA in 1988, Castille received a “Man of the Year award” from the Fraternal Order of Police, which has arduously sought Abu-Jamal’s death.

Spital noted that as DA, Castille’s focus on sending a message to “police killers” could be seen as either bias against a particular defendant or a class of cases. Under the Constitution, claims of judicial bias do not require proof of actual bias. The question for the court is whether the judge is likely to be neutral or whether there is unconstitutional potential for bias. The PA Supreme Court has held that recusal is required wherever there is substantial doubt as to the judge’s ability to preside impartially. Castille had denied repeated requests from Abu-Jamal to recuse himself.

For the third time in as many hearings, the Faulkner family and dozens of FOP members were given priority seating in the small courtroom, leaving little space for Abu-Jamal’s family and supporters. Former Assistant District Attorney Joseph McGill, who produced a training video for prosecutors to keep Black people off juries, and former police officer Gary Bell, who lied about hearing Abu-Jamal’s confession, were part of today’s FOP contingent — a clear effort to intimidate the court.

Abu-Jamal’s lawyers requested a one-month extension to await the results of their right-to-know request to the Pennsylvania State Senate Judiciary Committee for documents. Tucker granted the request and was determining that the court would reconvene on Dec. 3 when Maureen Faulkner, Daniel Fauklner’s spouse, stood up to denounce the extension. When she refused to stop her outburst, Tucker had her ejected from the court.

Tucker ended the session noting, “The court is not going to rush to judgment in this matter. Just to be clear, no matter how long it takes, this court is going to do the right thing.”