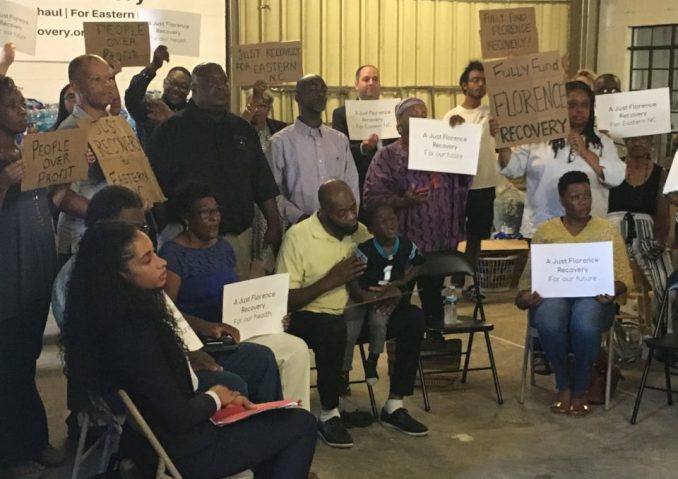 Raleigh, N.C. — As the North Carolina General Assembly met Oct. 2 in the Capitol in Raleigh to debate official responses to the devastation wrought upon the eastern part of the state by Hurricane Florence, a coalition of Black activists convened only a few miles away, holding a press conference at the Anchorlight art space to explain why they are uniting to fight for racial, economic and environmental justice in recovery efforts.

Under the aegis of A Just Florence Recovery, representatives of organizations and communities from all across Eastern North Carolina called upon state legislators to release resources — including a $2 billion “rainy day fund” — to help those most affected by the historic storm, and to ensure that the corporate powers responsible for decades of environmental degradation in Eastern North Carolina aren’t let off the hook for their role in the disaster.

Activists promulgated a set of political demands, including a legislative override of restrictions on the full use of the rainy day fund; that companies such as Smithfield Foods, Duke Energy and others pay into North Carolina’s disaster relief fund; that toxic sites in Eastern North Carolina created by these companies be moved away from vulnerable populations; that large corporate tax cuts scheduled to go into effect in 2019 be rolled back; and for the defeat of six North Carolina constitutional amendments (which are widely seen as attacks on voting rights and economic equality) on the ballot in November.

“I am a survivor of Florence,” said activist Resea Willis. “Where I was, it rained almost 30 inches on us. So if there is a rainy day fund, I’m here to tell you that it’s already raining. We need your help.”

“We need a recovery, people. … We don’t need to put a Band-Aid on this. We need a long term recovery,” echoed the Rev. Tyrone Watson, the president of the Unified Robeson County NAACP. “What do they define as a rainy day? Because it’s been raining on Robeson County and Columbus County for a long time. … The hurricane is gone but the storm has just begun for a lot of individuals. We need housing. We need environmental changes.”

While later that day the state General Assembly authorized $50 million in emergency funding, that sum accounts for only a miniscule fraction of available monies. Disbursements from the fund, established in 2016 after the state was hit by Hurricane Matthew, cannot amount to more than 7.5 percent of the previous year’s state operating budget. As several speakers pointed out, however, the damage inflicted by hurricanes does not honor such restrictions.

When Hurricane Florence made landfall in mid-September, it brought unprecedented rainfall and unleashed destructive forces on the people and communities of Eastern North and South Carolina that are just beginning to be understood. Following the storm and subsequent flooding inland, 48 individuals have been confirmed dead, 37 of them in North Carolina. Many still remain in shelters; up to 21,000 residents will need to permanently relocate; millions of livestock animals have drowned; and overall damage is estimated in the tens of billions of dollars.

Often overlooked in mainstream, sensationalistic media coverage, with its hyperventilating over looting and exploitative presentations of human misery, is the inherently political nature of “natural” disasters. As climate change continues to worsen, storms such as Florence are expected to increase in frequency and severity, and as they hit the United States with greater regularity, Black, Indigenous, Latinx and economically marginalized communities will bear the brunt of their impact.

“It’s clear to see that communities that are most impacted by this destruction are disproportionately low-income communities and communities of color, which are already burdened by decades of pollution,” said Friends of the Earth’s La’Meshia Whittington-Kaminski.

In Eastern North Carolina, predominantly Black towns are often clustered along low-lying, flood-prone land — the only kind historically available to them following the end of slavery — a racist legacy whose effects are felt anew with every major storm. Black communities are also far more likely to be located near and damaged by North Carolina’s hog farming industry, whose numerous concentrated animal feeding operations (CAFOs) create massive “lagoons” of animal waste.

These lagoons, whose contents are often sprayed onto nearby land, already overflow during heavy rains.  The amount of water brought by a weather event like Florence can spill out their contents over vast tracts. Thirteen lagoons breached due to Florence, with an additional nine flooded.

Farmworker communities, primarily Latinx, face a dual danger. The storm itself, of course, posed a direct threat to life and limb, but once it passed came a new complication: accounting for work that’s no longer there to be done. Florence’s floodwaters will likely ruin the 2018 sweet potato crop, whose harvest brought thousands of workers to North Carolina under the H-2A work visa program.

H-2A visas lock workers into contracts with specific employers and legally prohibit them from searching for alternate arrangements.  If a farmer/corporation decides to file an insurance claim rather than harvest a crop, workers must take a loss on a season’s work and instead use their limited resources to get home.

Undocumented workers are in an even more tenuous position, as reports of U.S. Immigration and Customs Enforcement agents circulating through damaged communities, and even standing guard over emergency shelters, have filtered out of affected areas.

Federal and national disaster relief organizations like the Federal Emergency Management Agency and the Red Cross have a poor track record when it comes to effectively providing aid to intentionally marginalized populations, leaving a gap to be filled by local partners and nontraditional actors.

While the Just Florence Recovery network has made efforts to direct resources to those who need them most, it is clear that a real recovery will require sustained efforts and tremendous funding — and that state actors will need to grapple with obstacles, both manmade and natural, to develop effective solutions.