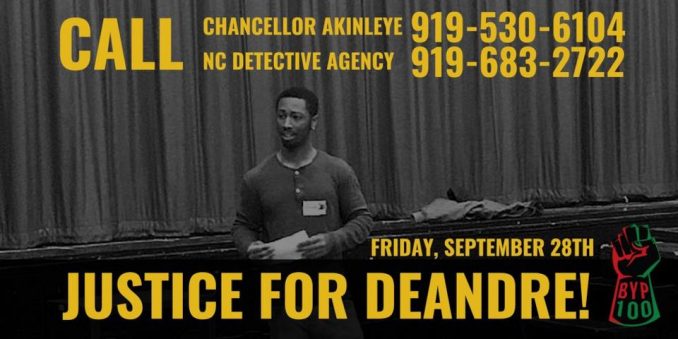 Friends and family began questioning his whereabouts when he didn’t show up for class the next day. They began posting on social media, asking if the NCCU community had seen DeAndre.

It was not until Sept. 21 that NCCU’s Chancellor Johnson O. Akinleye released an email saying DeAndre had “passed due to an incident.” The announcement left the entire student body in shock, wondering what had happened to DeAndre.

His mother, Ernisha Ballard, remembers him as someone who “loved God. He loved his friends, and he loved his family.” (heraldsun.com, Sept. 24) A “young visionary.” DeAndre was a member of Bon Vivant, a fashion society on campus. He was also an active member of 100 Black Men. He was an athlete and he loved football.

It wasn’t until Sept. 24, six days after he was killed that local news revealed DeAndre’s cause of death: He was shot to death by an armed guard at an off-campus housing complex, Campus Crossing.

Though Campus Crossing has no official contractual ties to NCCU, the connection is clear. Campus Crossing benefits from the continuing overflow of NCCU students. Due to growing neoliberal policies in public education, the NCCU administration has increasingly diverted its student body from public and campus resources to multiple private firms whose sole concern is profit — not valuing the lives of Black students.

Campus Crossing is an apartment complex located less than three miles from NCCU. A majority of residents at the complex attend NCCU, and NCCU even contracts for a transportation company to bus students to and from the housing complex. In the United States, higher education is run as a business and NCCU is no exception.

In an era of rising tuition rates, debilitating loan debt and hidden costs built into students earning degrees, NCCU administrators run their campus like a profit-making business. In their cost-benefit analysis, it seems they have chosen to conceal the facts of DeAndre Ballard’s death. The truth is bad for NCCU’s bottom line; it is bad for Campus Crossing’s bottom line.

DeAndre’s family has still received no answers from police and no support from NCCU. On Sept. 27, NCCU issued a second statement, this time labeling DeAndre’s homicide a “tragic” incident, refusing to even acknowledge his cause of death.

Instead of offering support, NCCU is opting instead to try to distance itself from and skirt its responsibility to DeAndre Ballard, his family and the entire Black community. Instead of placing DeAndre Ballard’s killing within the larger context of police violence, NCCU is attempting to decontextualize and depoliticize it.

Activists from Workers World Party and a broader coalition of organizations have organized in support of DeAndre, in support of the truth and against the neoliberalization of higher education that treats Black lives as just another expense to be itemized.