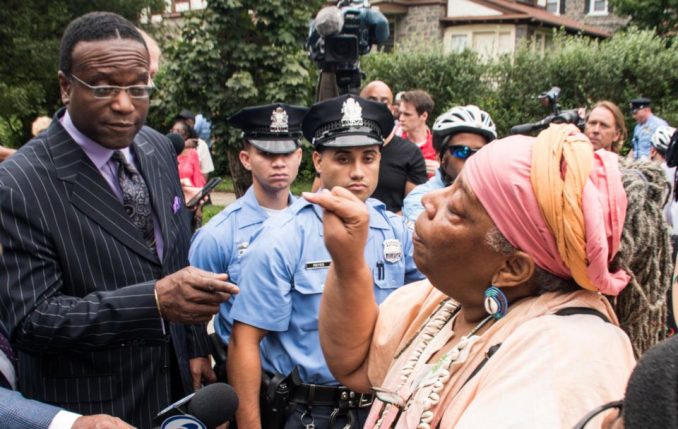 Philadelphia — On May 13, 1985, then Mayor Wilson Goode gave the OK to drop a bomb on 6221 Osage Ave. in the Black working-class, West Philly Cobbs Creek neighborhood. Left to burn, the fire that the bomb started destroyed more than 60 homes, leaving 250 people homeless and killing 11 members of the MOVE organization, including five children.

Today, the lone adult survivor of that bombing, Ramona Africa, is fighting for her life. She has cancer that the smoke, gas and hot air that she inhaled while fighting to breathe before she escaped from the burning house may have caused.

At the official renaming ceremony on Sept. 21, as politicians and their supporters sat on chairs in the middle of the targeted street in Philadelphia’s ritzy Overbrook Farms section, dozens of armed cops were needed to prevent demonstrators from putting an end to the hypocrisy.

But no state official put the former mayor in handcuffs and read him his rights for admitting his guilt. In fact, there is only one person who ever spent time in prison for the violent state-sponsored act of terror. That person was MOVE member Ramona Africa.

Over a loudspeaker, Maisha Sullivan-Ongoza, neighborhood resident and protest organizer, explained why she opposes the street renaming, even over 30 years after the bombing: “It’s painful. People are still traumatized. It’s like pulling a scab off an unhealed wound.”