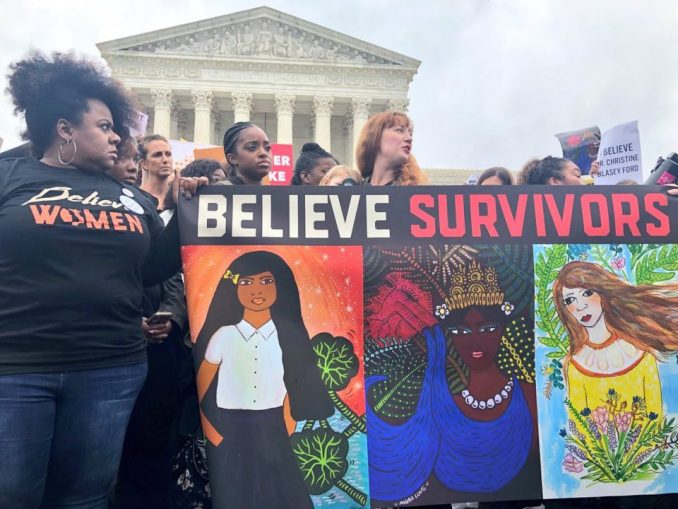 Sept. 24 — President Donald Trump’s Supreme Court nominee, Brett M. Kavanaugh, was considered a shoo-in when Senate hearings on his nomination began Sept. 4. But that was completely derailed 10 days later when allegations surfaced about a 1982 case of sexual assault, which Kavanaugh has unequivocally denied.

The tables have been turned upside down on Kavanaugh and all who support him. Now he — and his many lies — are on the defensive.

A hearing where Dr. Christine Blasey Ford (she’s professionally called Dr. Blasey) will describe the criminal attack she experienced as a 15-year-old is scheduled for Sept. 27. This situation is reminiscent of Anita Hill’s testimony about sexual harassment during the Clarence Thomas hearings in 1991.

But the 11 Republican senators, all older cis-gender males, face a dilemma in how they conduct that hearing: If they bluntly interrogate Dr. Blasey with open disbelief and hostility — as Trump, chair of the Senate Judiciary Committee Charles E. Grassley and others have already attempted — then the hearing will look totally biased, a blatant replay of the sexist attacks on Hill in 1991 that began opening the floodgates on women’s consciousness against the patriarchal capitalist system.

Social and cultural attitudes of the vast majority of U.S. working women have evolved dramatically in the intervening 27 years. As noted in a front page article, “Nominee’s Fate Is Pivotal Point in U.S. Politics” in the Sept. 23 New York Times: “[T]he battle over [Kavanaugh’s] confirmation has swelled into an event of titanic consequence in the country’s evolution on matters of gender and women’s equality.” And as a Sept. 22 NY Times editorial headline summarized, “G.O.P. Leaders Can’t Fake Respect.”

To complicate matters, a second accuser has come forward — Deborah Ramirez, a classmate of Kavanaugh’s at Yale — in a Sept. 23 New Yorker article. Though Kavanaugh has also denied her account, it is too early to tell how this will affect his confirmation.

Dr. Blasey is a professor at Palo Alto University and teaches in a consortium with Stanford University, training graduate students in clinical psychology. According to a Sept. 22 interview in the Washington Post, Dr. Blasey has researched depression, anxiety and resilience after trauma and published widely in academic journals. She has devoted her entire professional life to trying to understand, cope with and recover from the sexual assault she experienced as a youth.

Dr. Blasey attended the private all-girls Holton-Arms School and knew Kavanaugh because they were in the same elite country club circles. He went to all-boys Georgetown Prep. One summer evening in 1982 she attended a party in Bethesda, Md., with a few other youth, where Kavanaugh sexually assaulted her. In a letter to Sen. Dianne Feinstein, Dr. Blasey gave explicit details of the assault, which were quoted in the Washington Post article. Blasey said she was afraid Kavanaugh “might inadvertently kill me.” However, she was eventually able to free herself and escape after locking herself in a bathroom and after a while running out of the house.

As a Sept. 17 Vox.com artlcle reported: In Maryland where the alleged incident took place, “using force to molest someone without their consent is a felony, with a maximum sentence of 10 years in prison.”

Dr. Blasey did not talk about the incident until she was in psychotherapy years later. According to a Sept. 16 Washington Post article, “[S]he came to understand the incident as a trauma with lasting impact on her life. ‘I think it derailed me substantially for four or five years,’ she said. She struggled academically and socially, she said, and was unable to have healthy relationships with men. ‘I was ill-equipped to forge those kinds of relationships.’ She also said that in the longer term, it contributed to anxiety and post-traumatic-stress disorder symptoms with which she has struggled.”

After her name became public when mentioned in connection with Kavanaugh’s confirmation hearings, Dr. Blasey received death threats, so she, her two young boys and her spouse left their home. In addition she has been denounced in the most vile and disrespectful terms via social media. In response, she told the Washington Post: “Now I feel like my civic responsibility is outweighing my anguish and terror about retaliation.” Anticipating that her allegations might be denounced, she took a polygraph test administered by a former FBI agent on Sept. 16, which verified her story.

Reactions from women’s advocates and others

Women’s advocates and those who support reproductive justice, who oppose Kavanaugh being added to the Supreme Court, are wary of how Dr. Blasey’s testimony will be received. As New York Times columnist Maureen Dowd wrote on Sept. 23: “It is unnerving to think how far women have come, only to find ourselves dragged back to the same place.” Dawn Lagoons, executive vice president of Planned Parenthood, quoted in the front page NY Times article, questioned how women are perceived in 2018: “Are we respected? Are we believed? Are we equal?”

Fatima Goss Graves, president of the National Women’s Law Center, said the Senate’s immediate negative reaction to Blasey “exposed an enormous gulf between the country’s political institution and the outlook of many American women,” especially if senators attack Dr. Blasey and ignore survivors.

Tarana Burke, who started #MeToo for survivors of sexual assault in 2006, worried that the current situation would be “more wrenching” than the 1991 hearings because, despite women speaking out against sexual violence today, “[W]e still have an unresponsive set of politicians.” In anticipation of a backlash, Garrett Ventry, Republican staff member on the Judiciary Committee, resigned Sept. 22 after NBC News revealed allegations of sexual harassment against him.

Ominous clouds were already hanging over Kavanaugh’s head before Dr. Blasey came forward. Sen. Cory Booker (D-N.J.) protested, to no avail, that thousands of pages of information about the nominee had been purposely withheld, especially covering the time Kavanaugh assisted independent counsel Kenneth Starr during the failed Clinton impeachment and the Bush-era torture of detainees.

Reports of Kavanaugh’s heavy drinking starting in high school have since emerged, including his membership in a fraternity at Yale that was “notorious for disrespecting women” and in the “secret society” for seniors called Truth and Courage, also known by a slang sexist expression. (People, Sept. 20)

The hearings also revealed that Kavanaugh had close ties to federal judge Alex Kozinski, who had to retire after accusations of sexual assault and harassment by at least 15 women. But Kavanaugh denied any knowledge of that.

Many people were arrested during the hearings, speaking out for the rights of working people for accessible health care, legal abortion and workers rights. (See two WW articles by this writer: “Kavanaugh is no friend to workers,” in WW Aug. 9; “Trump nominated Kavanaugh to overturn legal abortion,” posted Aug. 14)

Whatever comes of this ruling-class crisis, the struggle to end patriarchy, which is a pillar of capitalist oppression, can only continue to grow as misogyny continues to be exposed and denounced. Think of the display of working-class power on Sept. 18 as hundreds of workers came out in at least 10 cities from coast-to-coast protesting the sexual harassment and abuse of low-paid women, often women of color and im/migrants, at McDonald’s restaurants.

The fight to end women’s oppression can only be advanced as more stories like Dr. Blasey’s become known and predators like Kavanaugh are exposed. Kavanaugh can deny Blasey’s allegations all he wants — just as Trump has lied about the 20 or more accusers who have pointed their fingers at him. But times have changed. In a stunning rebuke to Trump and his ruling-class buddies like Kavanaugh, “boys will be boys” no longer has credibility the way it once did.

Even though the Senate is packed with powerful older white men, their days are numbered. No matter how this crisis ends — even if Kavanaugh is voted onto the Supreme Court — the fact that senators are worried about how women will perceive them is a very good sign. They can no longer succeed by relying on their old lies or sexist maneuvers to control women.