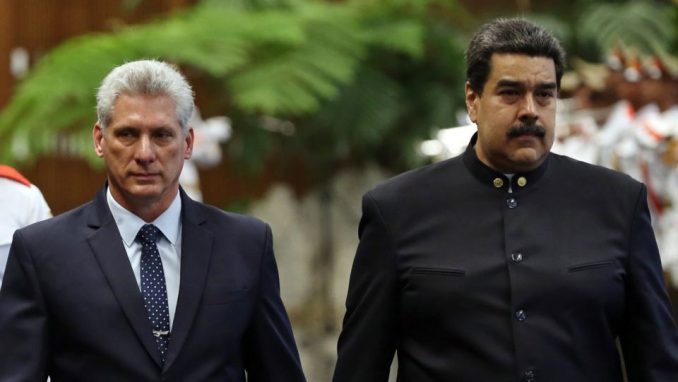 The best thing about the United Nations General Assembly’s annual fall meeting is that it often brings revolutionary leaders to New York City and gives them an opportunity to speak with the U.S. population. In the past they have brought inspiration and hope despite whatever goes on in the U.N. itself, where U.S. imperialism has a heavy hand. Usually the U.S. refuses to let these leaders in. The ruling class here prefers to keep revolutionary leaders demonized, continuously slandering them and keeping them apart from people in the U.S.

When it is possible to organize a public meeting for them, as it is this year, that offers the anti-imperialist movement in the U.S., and especially in the New York metropolitan area, an opportunity to express support for the defense of countries that have revolutionary leadership. Such nations are always under heavy attack from the U.S. ruling class and its organs of power, including the Pentagon, the CIA and the corporate media.

This week brings a special opportunity. The new president of Cuba, Miguel Díaz-Canel of Cuba, who recently succeeded historic revolutionary leader President Raul Castro, will be representing socialist Cuba at the United Nations. He will also be speaking at a public meeting at Riverside Church on Sept. 26, for which the progressive movement in New York has been organizing.

Despite the “opening” to Cuba made by President Barack Obama in December 2014, the U.S. has not lifted its economic blockade, and the current president has reinstated hostile trading rules. Cuba remains under continuing, vicious attack by U.S. imperialism. Cuba also remains determined to resist oppression and build a socialist path into the future.

Miguel Díaz-Canel of Cuba was inaugurated as president in April, on the anniversary of the U.S.-funded 1961 Bay of Pigs invasion. Succeeding comrade-presidents Fidel Castro and Raúl Castro, he represents the country’s triumph in continuing to build socialism despite decades of U.S. economic blockade and endless CIA dirty tricks and assassination attempts on Cuban leaders.

Born after the 1959 Revolution, Miguel Díaz-Canel reminds us of the triumphs wrested by Cuba despite unrelenting U.S. hostility. His commitment to education recalls the 1961 countrywide revolutionary mobilization of over a million people resulting in 96 percent literacy in the population in less than a year. His long support of LGBTQ issues and of same-sex marriage demonstrates the forward-moving evolution possible through building socialism.

The left-progressive movement, as well as all workers in the U.S., can strengthen our struggles with the steel in Díaz-Canel inaugural speech: “[The Revolution] will continue moving forward without fear and without retreat; without renouncing our sovereignty, independence, development programs, and independence.” Rebutting U.S. propaganda that Cuban’s path to socialism will be derailed without a Castro at the helm, Díaz-Canel closed with these words: “The world has received the wrong message that the Revolution ends with its guerrillas.”

We welcome the Cuban president’s visit and urge progressives and workers to show their support for Cuba’s message.

If any Latin American country is under more direct U.S. attack at this moment than Cuba, it is Bolivarian Venezuela. Over the summer there was an attempt to assassinate Venezuela’s President Nicolás Maduro as he was speaking in Caracas. A few weeks ago there were reports that, frustrated by the failure of the discredited right-wing opposition in Venezuela to mount an effective attack on this elected leader, the U.S. was meeting with a handful of Venezuelan dissident military officials to plot direct U.S. military intervention. And today, Sept. 25, the U.S. president’s talk at the U.N. made Maduro and Venezuela a special target of his venom.

This week the U.S. announced additional new sanctions against Venezuela and its leaders, including against Maduro’s spouse, Cilia Flores, who is an elected member of the National Assembly. In the U.S. corporate media there has been a continuous stream of attacks against Maduro, a leader who continues the Bolivarian Revolutionary process begun by late President Hugo Chávez — moving a country toward socialism though capitalist and reactionary forces still control the economic sector.

In Maduro’s first trip for a U.N. meeting as president, the Washington Post damned him with disgusting anti-worker rhetoric, calling him an “economically illiterate former bus driver.” Maduro, trained in Marxist economics and theory, retorted: “I’m proud that a bus driver can be president of the Republic.” (Telesur, Sept. 22, 2014)

Supporters of Bolivarian Venezuela are holding a meeting Thursday, Sept. 27 at Riverside Church at 6 p.m. where we from Workers World Party will join others in the progressive movement to support the Venezuelan spokespeople with anti-imperialist enthusiasm, just as we do the Cuban president a night earlier.