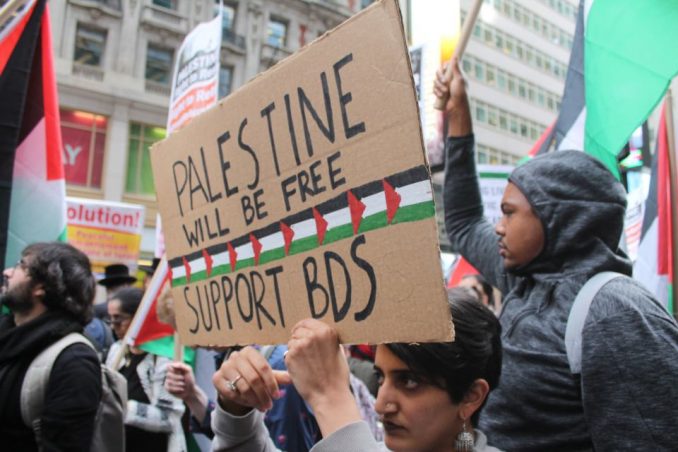 March earlier this year in NYC supports Palestine and BDS.

The Great March of Return by Palestinians in the Gaza Strip will enter its seventh month Sept. 28.

The mobilization, launched by tens of thousands in the besieged coastal enclave on March 30 — Palestine’s annual Land Day — demands the right of return for millions of Palestinian refugees driven from their homes by Zionist militias and Israeli occupation forces starting in December 1947.

These ethnic-cleansing operations both separated ancient Gaza City and a sliver of land around it from the rest of Palestine and transformed the newly isolated territory’s demographics overnight.

Today two-thirds of Gaza’s population are refugees from outside the enclave, many from nearby cities and villages within sight of Gaza itself.

For the past six months, demonstrators have amassed every Friday along a barrier erected by the Israeli state around the Strip. Most demonstrators congregated in “return camps,” temporary villages filled with celebrations of Palestine’s culture and commemorations of its history. Some sought to push through the barrier and return to their original homes and communities, now occupied by Israel.

In recent weeks, these advances toward the fence have become more frequent, occurring nearly every day.

Since March, Israeli soldiers stationed by the barrier have responded with tear gas, rubber-coated steel bullets, live ammunition and airstrikes. By the end of Sept. 23, Israeli occupation forces had killed 185 protesters, injuring at least 20,492 more, according to the Palestinian Ministry of Health in Gaza.

Israel made little effort to hide the genocidal intent behind its free-fire policy. “Yesterday we saw 30,000 people; we arrived prepared and with precise reinforcements,” Israel’s military spokesperson tweeted on March 31, a day after its occupation forces had massacred 15 demonstrators. “Nothing was carried out uncontrolled; everything was accurate and measured, and we know where every bullet landed.”

Thirteen days later, Israeli reserve brigadier-general Zvika Fogel responded to a growing outcry over Israel’s repeated killings of children by telling Kan: “It is not the whim of one or the other sniper who identifies the small body of a child now and decides he’ll shoot. Someone marks the target for him very well and tells him exactly why one has to shoot and what the threat is from that individual.” (Electronic Intifada, April 22)

Demonstrators responded to Israel’s brutal repression with creative tactics. including the use of fireworks, laser pointers and smoke from tens of thousands of burning tires to obscure the vision of Israeli soldiers.

Their balloons and kites, many on fire, ignited nearby settlements and dragged Israeli military drones from the sky.

In several cases, protesters successfully broke through the barrier, sometimes disabling Israeli military posts on the other side.

Over the same period, seven flotillas of boats launched from the port of Gaza to breach Israel’s naval blockade and sail to their passengers’ ethnically cleansed lands. The Israeli navy captured some, confiscating the vessels and briefly detaining their occupants, and repelled others with tear gas and live ammunition.

Returning to our land

Various Palestinian political organizations, all of which have supported and participated in the March, vow to persevere until their demands are met.

“We will continue the March of Return until we achieve our goals of returning to our land in the long run and breaking the siege of Gaza in the near term,” Yahya al-Sinwar, leader of the Hamas movement in Gaza, said by the barrier as demonstrators gathered in five camps along it on Sept. 21. (Hamas website, Sept. 21)

Palestinian groups have also called for an escalation in international solidarity with Palestine and efforts to isolate Israel for its crimes against them.

“Strengthening, mainstreaming and popularizing Palestinians’ call for a two-way military embargo on Israel is the most effective response to Israel’s ongoing massacre,” the Palestinian Boycott, Divestment and Sanctions (BDS) National Committee said in a statement on April 12. (bdsmovement.net)

“This means working to end all weapons sales and purchases to and from Israel, and ending military or police partnerships with the Israeli state.”

Joe Catron is the U.S. coordinator of Samidoun: Palestinian Prisoner Solidarity Network. He lived in the Gaza Strip as an international solidarity activist and freelance journalist from March 2011 until October 2014.