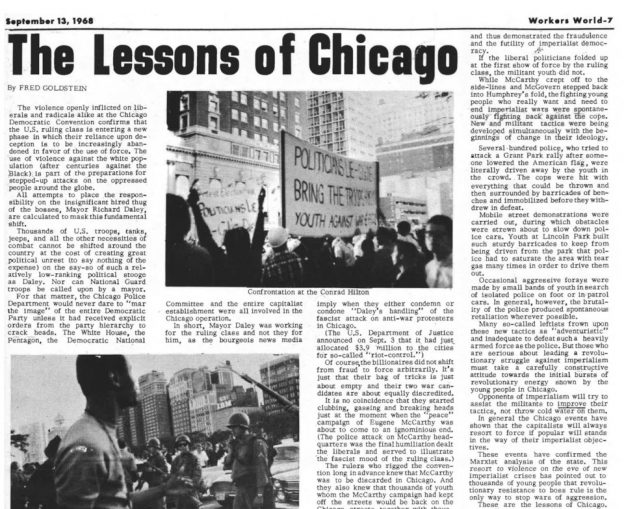 This is the 50th anniversary of the massive street struggles in 1968 during the Democratic National Convention. We reprint here an article by Fred Goldstein from the Workers World of Sept. 13, 1968.

The violence openly inflicted on liberals and radicals alike at the Chicago Democratic Convention confirms that the U.S. ruling class is entering a new phase in which their reliance upon deception is to be increasingly abandoned in favor of the use of force. The use of violence against the white population (after centuries against the Black) is part of the preparations for stepped-up attacks on the oppressed people around the globe.

All attempts to place the responsibility on the insignificant hired thug of the bosses, [Chicago] Mayor Richard Daley, are calculated to mask this fundamental shift.

Thousands of U.S. troops, tanks, jeeps, and all the other necessities of combat cannot be shifted around the country at the cost of creating great political unrest (to say nothing of the expense) on the say-so of such a relatively low-ranking political stooge as Daley. Nor can National Guard troops be called upon by a mayor.

For that matter, the Chicago Police Department would never dare to “mar the image” of the entire Democratic Party unless it had received explicit orders from the party hierarchy to crack heads. The White House, the Pentagon, the Democratic National Committee and the entire capitalist establishment were all involved in the Chicago operation.

In short, Mayor Daley was working for the ruling class and not they for him, as the bourgeois news media imply when they either condemn or condone “Daley’s handling” of the fascist attack on anti-war protesters in Chicago.

(The U.S. Department of Justice announced on Sept. 3 that it had just allocated $3.9 million to the cities for so-called “riot-control.”)

Of course, the billionaires did not shift from fraud to force arbitrarily. It’s just that their bag of tricks is just about empty and their two war candidates are about equally discredited.

It is no coincidence that they started clubbing, gassing and breaking heads just at the moment when the “peace” campaign of Eugene McCarthy was about to come to an ignominious end. (The police attack on McCarthy headquarters was the final humiliation dealt the liberals and served to illustrate the fascist mood of the ruling class.)

The rulers who rigged the convention long in advance knew that McCarthy was to be discarded in Chicago. And they also knew that thousands of youth whom the McCarthy campaign had kept off the streets would be back on the streets, together with thousands of radical youth who had never fallen for the imperialist-liberal McCarthy in the first place.

So the bosses prepared well ahead of time to deal with the anger and indignation which was as inevitable as the Humphrey-Nixon race. They decided to give the white youth a taste of the treatment hitherto reserved for the Black liberation struggle.

But an important by-product of Chicago is the wave of revulsion of new layers of youth for a parliamentary system which has to defend its candidates from the hatred of the population with bayonets and clubs.

Parliamentary illusions went up with the clouds of tear gas as the war party at the amphitheater steam-rolled over popular anti-war sentiment. The flow of blood from the heads of unarmed demonstrators in front of the Conrad Hilton made many a convert to the revolutionary struggle.

The bourgeoisie used strong-arm methods to brush the liberals aside and thus demonstrated the fraudulence and the futility of imperialist democracy.

If the liberal politicians folded up at the first show of force by the ruling class, the militant youth did not.

While McCarthy crept off to the sidelines and McGovern stepped into Humphrey’s fold, the fighting young people who really want and need to end imperialist wars were spontaneously fighting back against the cops. New and militant tactics were being developed simultaneously with the beginnings of change in their ideology.

Several hundred police, who tried to attack a Grant Park rally after someone lowered the U.S. flag, were literally driven away by the youth in the crowd. The cops were hit with everything that could be thrown and then surrounded by barricades of benches and immobilized before they withdrew in defeat.

Mobile street demonstrations were carried out, during which obstacles were strewn about to slow down police cars. Youth at Lincoln Park built such sturdy barricades to keep from being driven from the park that police had to saturate the area with tear gas many times in order to drive them out.

Occasional aggressive forays were made by small bands of youth in search of isolated police on foot or in patrol cars. In general, however, the brutality of the police produced spontaneous retaliation wherever possible.

Many so-called leftists frown upon these new tactics as “adventuristic” and inadequate to defeat such a heavily armed force as the police. But those who are serious about leading a revolutionary struggle against imperialism must take a carefully constructive attitude towards the initial bursts of revolutionary energy shown by the young people in Chicago.

Opponents of imperialism will try to assist the militants to improve their tactics, not throw cold water on them.

In general, the Chicago events have shown that the capitalists will always resort to force if popular will stands in the way of their imperialist objectives.

These events have confirmed the Marxist analysis of the state. This resort to violence on the eve of new imperialist crises has pointed out to thousands of young people that revolutionary resistance to boss rule is the only way to stop wars of aggression.

These are the lessons of Chicago.