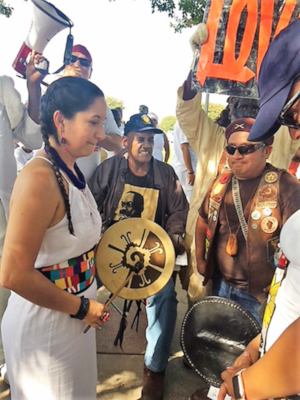 Houston — Almost 100 graves have been uncovered in Sugar Land, Texas, a Houston suburb that was once a sugar plantation that relied on enslaved labor and that was later converted to a Texas prison. The local Fort Bend School District was building a new technology center there this spring when construction workers discovered human remains.

While most were surprised at this discovery, Reginald Moore was not. Moore is a historian, a retired longshore worker and an activist who founded the Texas Slave Descendant Society. He lives just outside of Sugar Land and had warned the school district that graves were likely on the land the district bought from the Texas prison system.

Moore spoke at the construction site on July 22 at an event called by the Houston chapter of the National Black United Front. After several dozen cars caravanned from the inner city to the construction site, activists began drumming. The Brown Berets participated as Blanca Rodriguez Alanis drummed and sang in a celebration of Indigenous lineage. Members of the Black Panther Party Alumni Association carried their Panther banner. Children carried flowers to the perimeter of the fenced-off area.

Activists listened as the national chair of the NBUF, Kofi Taharka, introduced Moore. He explained that the remains could be of enslaved people or those previously enslaved who had been incarcerated and forced to labor in the convict-lease system. This was a state-authorized system that “provided labor” to owners after the abolition of slavery in the U.S. in 1865.

Moore noted: “Yes, the 13th Amendment [to the U.S. Constitution] got rid of slavery, but the exception was for prisoners. These prisoners were forced to work under a system that was slavery by another name.”

Moore told of working at the Beauford H. Jester Unit, a Texas prison which was the Harlem Farm in the late 1800s. During the three years he worked there, even before he learned the history, he said he felt the repression dealt out to Black convicts. He began to study and explore historical records.

According to the Texas Almanac, after the Civil War ended, the number of Black people in Fort Bend County was double the white population. They were then legally free and, theoretically, could freely sell their labor, which owners had exploited for no pay under slavery.

Used to paying nothing, plantation owners needed the labor of Black people to grow their crops and make their money. To re-enslave Black workers, the post-Civil War “Black Codes” laws were put in place legislatively throughout the states of the former Confederacy. These were designed to restrict the movement and conditions of employment of Black workers and to send any workers who violated these laws to jail to be “leased out” to plantation, mine or mill owners. The owners paid the state, not the workers, for their labor.

Just after the war ended, there were only about 200 prisoners in Texas, but those numbers began to swell. Some of the convicts, 60 percent of whom were Black, were leased to plantation owners in the Sugar Land area so sugar cane could be harvested and boiled down.

Archaeologists exhuming the remains found at Sugar Land have determined that all identified so far were African American and male, except for one, and ranged in age from 14 to 70.

Black activists led by Moore recently met with the Fort Bend School District to discuss the next steps. While the district officials talked a good line, according to Taharka, they would not formally agree to activists’ demands for reparations, for building a memorial and for trying to find family members of the deceased. Representatives from the S.H.A.P.E. Community Center, the Nation of Islam and the Black United Front contend that this struggle is far from over.

In a July media release, the university stated: “Once the state’s convict-leasing program officially ended in 1914 after 36 years, its remnants were swept under many rugs. In the 21st century, the few physical reminders of the system are at risk of being erased completely. Fort Bend became one of the fastest-growing counties in the nation as Sugar Land’s suburban sprawl plowed over the fallow fields of former sugar plantations.”

NBUF had a second town hall meeting about the cemetery on Aug. 28, with updates from activists. The Black community’s demands regarding the cemetery include that the meaning of the graves be “interpreted by scholars familiar with the intellectual and cultural traditions of Black America and the African Diaspora;” that the cemetery be an opportunity for community and public education, with eventually the establishment of a convict-leasing museum; and that “lineal and cultural descendants be sought” using DNA testing and current scholarship.

The community demands emphasize the brutal and shameful history of convict leasing as a crime against humanity. Members said this “raises serious questions about the moral responsibility of the U.S. government at every level.” The demands note that leasing convicts to companies was a state-sanctioned practice from which both the companies and the state treasury benefited.

One of those companies was the Imperial Sugar Company, established in 1843 and to this day still headquartered in Sugar Land. At its height, the company was one of the richest and most powerful corporations in Texas and was the largest sugar company in the U.S. Imperial Sugar is still in business, marketing “Dixie Crystals” and reporting $848 million in revenues in 2011.

The state of Texas and the corporations reaping profits bear responsibility for crimes against humanity, specifically against African-American people. The fact and the meaning of these crimes are still not taught to the state’s children as part of Texas history. Meanwhile, those interred in the Sugar Land cemetery cry out for justice.