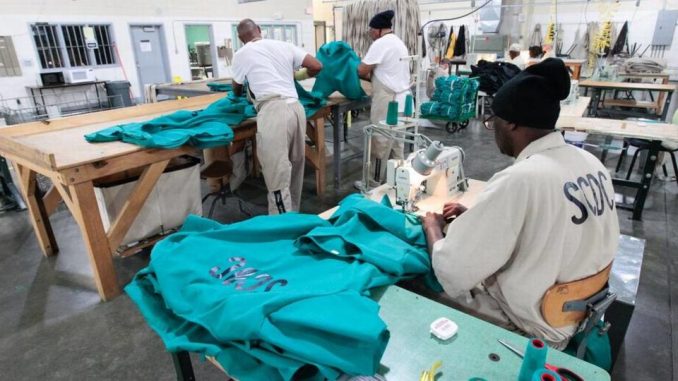 Prisoners at Lee Correctional make uniforms for all the inmates in the South Carolina state prison system.

This is an excerpt from an interview conducted after an April 15 rebellion at Lee Correctional Institution, a South Carolina maximum security prison. Jared Ware spoke with individuals inside Lee, one of whom identified as a member of Jailhouse Lawyers Speak, a group of imprisoned human rights advocates who called for the National Prison Strike, Aug. 21 to Sept. 9.

Jared Ware: I want to give you an opportunity to talk about change. What changes would you like to see in the prison system? I know some of you are abolitionists, but what can be done for immediate needs in terms of reforms?

D: I’m always thinking about it as a dismantling process. I’ve been trying to push that for a while. We call it a dismantling process. And that gives the opportunity for other people to get in with their reform ideas, because I don’t think we can go from one angle all the way to the other angle, like from zero to a hundred. It’s just not going to happen like that. It is not going to play out like that.

We need an end of dehumanizing conditions, and that means food improvement. We need open yards again, not just enclosed rec yards; we need these open rec yards again, where prisoners can move. We need prisoners to start being treated like humans. We need more rights to our visits. We need education programs. I’m a big one on education programs, in particular Pell Grants. … They need to be brought back to the prison systems again.

Not only that, but what the state of South Carolina did as the prison population fell — instead of closing down the maximum security prisons, they closed down the work releases. We need work releases opened back up and expanded.