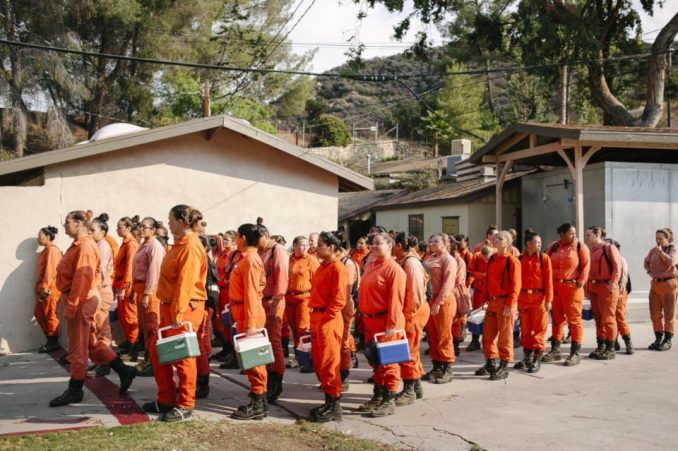 Wildfires have been raging ferociously in California this year. According to meteorologist Craig Clements at San Jose University, wildfires have also been much larger than usual. Fire seasons typically run from May to November in northern California, Napa Valley and Sonoma counties. In the summer, 100-degree temperatures dry out the grass, and droughts add to the problem.

In 2017, fires in California were the deadliest since the beginning of record keeping, with 100,000 people forced to evacuate and around 75,000 displaced when their homes and businesses were destroyed. It took more than 11,000 firefighters to battle those blazes.

Officially, at least 35 to 40 percent of Cal Fire, the state’s firefighting force, are prison inmate crews, and the number may be even higher. ‘‘Any fire you go on statewide, whether it be small or large, the inmate hand crews make up anywhere from 50 to 80 percent of the total fire personnel,’’ says Lt. Keith Radey, a commander in charge of one of the inmate fire camps. (Daily Beast, Oct. 14, 2017)

About 4,000 inmates each week fight wildfires alongside civilian firefighters. That number includes approximately 250 women. There are 43 inmate firefighting camps. The three camps for women were opened in 1983.

In the fires, women wear either yellow or orange fire-retardant suits, helmets and handkerchiefs to cover their mouths and necks. Each one carries 50 to 60 pounds of gear and equipment in her backpack, and some also carry chainsaws. Crews of 14 people each fight on the front lines.

Firefighting is dangerous, grinding work requiring endurance and includes injuries and some deaths. Prison crews in California firefighting bring to mind chain gangs without the chains.

Inmates have been doing work as prisoners in California since the mid-1800s. The earliest state prison was on a ship. Prisoners slept on deck at night and during the day built San Quentin, the state’s first prominent prison.

In the early 1900s, inmates were paid to build roads and highways. During the Depression, they were moved into temporary camps in a public relief program. They also harvested crops and repaired infrastructure. During World War II, prisons became factories for the military.

Nowadays, California’s institutionalized inmates make license plates, prison uniforms, office furniture for state employees and anything else the prison may need. They usually earn between 8 cents and 95 cents per hour.

But inmates in the forestry program are paid more to fight fires. They can make up to $2.56 a day in camp, plus $1 an hour when fighting fires, though during training they may be paid nothing at all.

In comparison, full-time civilian firefighter salaries start around $40,000 yearly or $17 per hour minimum.

In 2014, when California courts took up the issue of overcrowded prisons, the state attorney general’s office argued against shrinking the number of inmates because prisoners were needed to fight fires. In 2015, Gov. Jerry Brown agreed. Other states use prisoner firefighters, but not nearly on the scale that California does.

Most California inmates volunteer to fight fires. They must pass a fitness test, and then they receive as little as three weeks’ training, compared to a three-year apprenticeship for full-time civilian firefighters.

Prisoners fighting fires are serving terms for nonviolent, low-level crimes, such as drug or alcohol-related offenses. Volunteers have to earn the right to be chosen for “rehabilitation work.” High risks are involved, but they earn more money than in other prison jobs — in a less violent atmosphere, in more physical space than a prison cell offers. The risks are weighed against the same amount of time served inside a correctional facility.

Women prisoners interviewed have given a range of feelings about being in the forestry program. At firefighters’ camp, they have woodworking areas, softball fields and libraries. They enjoy being outdoors and having barbecues with family visits. Children see their parents in a camp environment rather than inside a restricted prison.

And women may get to see their children on the outside sooner because their sentences are reduced due to firefighting credit. For every day they are in a camp, their sentence is reduced by one day. Some women provide this labor for years. They resent the hardship and intense physical labor, but say it is worth the risk.

Since women in the firefighting camps are available 24 hours a day for work, they are considered a “resource” for the state. California’s firefighting program saves taxpayers close to $100 million each year, according to the CDCR. The cost for housing each inmate in a prison facility is $76,000 a year, as opposed to using them to fight blazes.

But the ACLU’s director of the National Prison Project, David Fathi, points out that such dangerous work outside prison walls certainly runs the risk of governmental abuse and that inmate firefighters may not also be aware of the long-term health risks. (The Daily Beast)

Prisoner firefighters put their lives on the line for very little money. Fire camp may be a “nicer way” for them to be in prison — but they’re still prisoners.