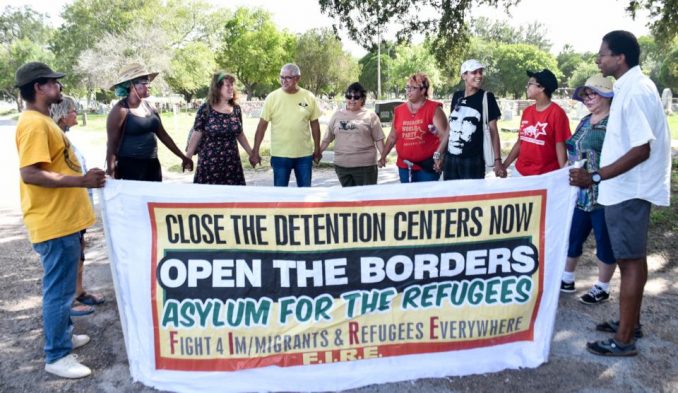 Sixty im/migrant prisoners began a hunger strike July 17 at the Immigration and Customs Enforcement facility in the Bristol County House of Corrections complex in North Dartmouth, Mass. Another 72 prisoners joined this bold action on July 20. These detainees, some undergoing removal proceedings and others awaiting deportation, are protesting the deplorable conditions of their captivity.

Detainees called the group’s hotline to ask for help in publicizing their protests over the facility’s terrible conditions. They say the food served them is not nutritious and often rotten, and they are ignored if they get food poisoning. It can take up to two weeks to get needed medical care, if it’s provided at all. One prisoner with a broken hand has not seen a doctor for three weeks. People having seizures get no care, and those needing medications don’t get them.

Hunger strikers report that showers and bathrooms are full of mold. Phone and commissary prices are double — or more — the cost outside the prison, but the facility’s food is so bad that detainees must buy food at the canteen. They report being subjected to racist and other verbal abuse by guards, as well as inhumane treatment, including guards laughing at prisoners who faint from hunger.

Families for Freedom reports: “Bristol County House of Corrections is a facility with a history of mistreatment” and high suicide rates. “Sheriff Thomas Hobson, a Trump fan, is known for his exceptional brutality, misconduct, including receiving kickbacks from prison telecoms and his proposal to use prison labor from his county to build Trump’s border wall.” (Press release, tinyurl.com/y9padac4)

The hunger strikers’ Call to Action succinctly lists their demands for proper medical care, nutritious food and essential hygienic equipment and services. They ask supporters to advocate for them by calling the following officials to ask that their demands be met: Bristol County Detention Facility at 508-995-6400 and Acting ICE Field Office Directors Thomas Brophy and James Rutherford at 781-359-7500.

Across the country, im/migrants are protesting horrendous conditions of their captivity through whatever means they can. Women migrants held at the Port Isabel Detention Center, a prison-like ICE facility in Los Fresnos, Texas, have intense feelings of isolation, grief and anxiety, exacerbated by separation from relatives, especially their children. The women are even cruelly prohibited from hugging each other for comfort. Yet they have found ways to resist.

Some women at Port Isabel are objecting to the lack of telephone calls with their children by staging rolling hunger strikes. Most women have only been allowed a few calls. The Intercept blog reported that as of July 18, about 15 women had been alternating fasting days for two weeks — not eating for two days, after which another group fasts for two days.

Debbie Nathan, Intercept’s reporter, spoke with 24 women detainees, including one who had not been allowed to call her child for several weeks. After her two-day hunger strike, this woman was permitted three calls. Despite being threatened with placement in solitary confinement if they fast, a number are courageously doing it anyway.