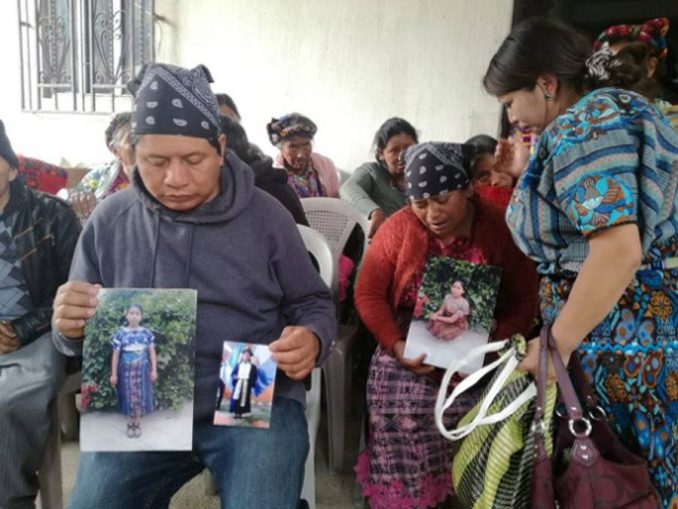 Family members and neighbors in the Indigenous community of Claudia Patricia Gómez Gonzáles, dead in Texas, grieve in her home in Los Alonzo, near San Juan Ostuncalco, department of Quetzaltenango, Guatemala.

Claudia Patricia Gómez González, a Maya-Mam woman from Guatemala, killed by the U.S. Customs Border Police in Rio Bravo, Texas, on May 23.

Claudia Patricia Gomez Gonzales, an unarmed woman from Guatemala, was shot in the head and killed on May 23 by Customs Border Police in Rio Bravo, Texas. She was 20 years old.

Al Jazeera news noted: “Gonzalez was an Indigenous Maya-Mam woman who had graduated from a forensic accounting program in 2016. Her family said she was going to the U.S. to find work as they did not have enough money for her to continue her studies.” (May 26)

Karina Alvarez, the founder of Laredo Immigrant Alliance, told Al Jazeera that Trump’s rhetoric on migrants had emboldened agents in border towns: “He was describing us the other day as animals and look now, they shoot us like animals.”

The U.S. has stepped up a campaign of terror against im/migrant workers and refugees fleeing the U.S-spawned violence in their home countries.

The current campaign is spearheaded by President Trump, his arch-racist Attorney General Jeff Sessions, his Chief of Staff John Kelly and his bigoted presidential coterie. The new policies are designed, by intimidation and terror, to prevent those facing repression and murder in their homelands from traveling to the U.S. to find jobs or seek shelter. The violent policies are rooted in white supremacy and clearly violate U.S. and international law.

The administration’s racism was rampant in Sessions’ May 7 speech at the U.S. border in San Diego: “Today, we’re here to send a message to the world that we’re not going to let our country be overwhelmed.” Sessions announced that every person stopped crossing into the U.S. “illegally” will be arrested and reviewed by the Department of Justice for prosecution. As for families, children will be taken from parents and turned over to govenment agencies. (San Diego Tribune)

The San Diego Tribune commented: “The decision to prosecute asylum seekers who cross illegally into the U.S. goes against the [U.N.] Refugee Convention of 1951.” The convention states that countries signing the agreement, as the U.S. did, will not penalize asylum seekers for illegal entry if they go immediately to authorities and show “good cause” for their presence. (May 7)

Both U.S. and international laws declare that asylum seekers who cross the border are not violating any law and dictate that U.S. officials must allow refugees to have a legal hearing to rule on their application for asylum. Trump and his henchmen are openly defying those laws.

Beyond legality, many migrants from Central America are Indigenous, like Gonzales herself, or have Indigenous heritage. The borders they are crossing exist only as a result of the genocide and land theft carried out by Spanish and English settlers. The extreme force being used by the U.S. to police its border comes from a racist settler-colonial mindset.

The new DOJ policy authorizes border agents from the CBP and Immigration and Customs Enforcement to strip all children, even infants in arms, from parents seeking work or asylum in the U.S. and to place the children in military bases in Texas and Arkansas. (tinyurl.com/ycynjtye)

An April 20 New York Times article reported: “On Feb. 20, a young woman named Mirian arrived at the Texas border carrying her 18-month-old son. They had fled their home in Honduras through a cloud of tear gas, she told border agents, and needed protection from the political violence there. She had hoped she and her son would find refuge together. Instead, the agents ordered her to place her son in the back seat of a government vehicle, she said later in a sworn declaration to a federal court.” The boy was driven away.

In fact, U.S. law and policy for hundreds of years has legalized the inhuman separation of parents and children — both through breaking up families in “property sales” of enslaved Black parents and children and through the  “legal” kidnapping of Indigenous children from parents and placing them in “boarding schools” structured to sever them from their culture and people.

At the end of March, the Trump regime announced that they would not release pregnant migrant women from detention centers, notorious for their poor medical care. “This new policy further exposes the cruelty of Trump’s detention and deportation force by endangering the lives of pregnant immigrant women,” said Victoria Lopez, senior staff counsel at the American Civil Liberties Union. (ACLU release, March 29)

On May 25, Trump nominated Ronald Mortensen, founder of the Utah Coalition on Illegal Immigration, which the Southern Poverty Law Center has called a hate group, to be the new secretary of state for the Bureau of Population, Refugees, and Migration. “He has accused undocumented immigrants of ‘destroying the lives of American men, women, and children.’ And now Trump wants him to lead the federal agency whose mission is to ‘provide protection, ease suffering, and resolve the plight of persecuted and uprooted people around the world.’” (New York Magazine, May 25)

Outrage over Trump’s atrocities must be converted to militant mass action and solidarity with im/migrants. This is the only way to stop this racist demagogue and his administration in their tracks.

Open the borders and #ShutDownICE!