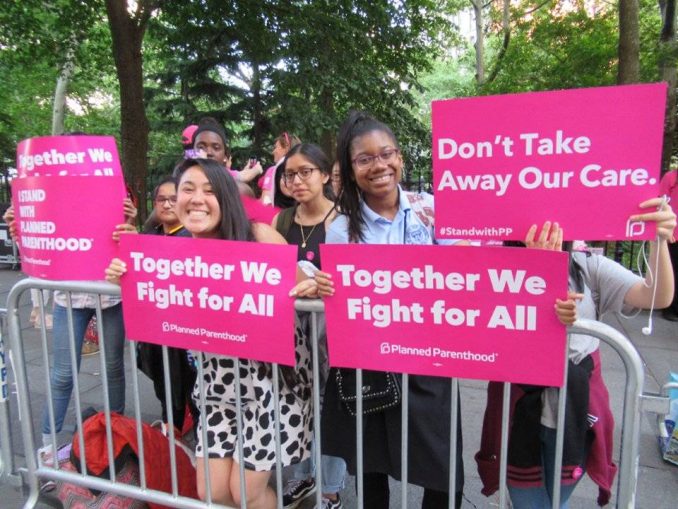 New York City demonstration in support of Planned Parenthood on May 24.

Between May 18 and 21, two arms of the Trump administration delivered a one-two punch. One knocked down poor women’s access to comprehensive reproductive health care and the other assaulted justice on the job.

The Supreme Court issued a viciously anti-worker 5-4 decision on May 21, written by Trump appointee Neil Gorsuch, giving the conservative stamp of approval to corporate arbitration agreements that deny individual workers the right to join together in class action suits. This ruling, while bad for all workers, will have a particularly vicious effect on people of color and women who need to band together to demand an end to such practices as pay discrimination, racism at work and sexual harassment on the job.

The Trump administration is targeting Title X, which since 1970 has successfully provided free, comprehensive, scientifically effective reproductive health care for low-income women, predominantly women of color. It is the only such federal program, so Trump is exerting his executive power to destroy it and restrict poor women’s rights in the process.

This blatantly ideological attack on the Title X network would affect about 4,000 health centers that nationally serve about 4 million clients. According to the latest Guttmacher Institute statistics, two-thirds of patients have incomes at or below the federal poverty level, nearly half are uninsured and another 35 percent are covered by Medicaid. The federal poverty level was $20,090 for a family of three in 2015.

Rewire.News points out that the new rule would force “an unnatural split between contraception and abortion services,” while forcing already vulnerable women, including im/migrants, youth, rural residents, disabled women and survivors of domestic violence, “to take unnecessary risks to end unwanted pregnancies.” (May 22)

The restrictive rule was first introduced during the reactionary Reagan administration, and though upheld by a Supreme Court ruling in 1991, it was never implemented. Clinton dumped it in 1993.

But anti-abortion zealots have resurrected it and plan to use it aggressively to defund Planned Parenthood, a longtime goal. They claim that the 40 percent of Title X patients who current rely on Planned Parenthood for basic medical care could be served by other federal health care clinics. However, a Guttmacher study shows that other current Title X sites would need to increase client caseloads by about 70 percent to accommodate Planned Parenthood patients — forcing many to go without care, with predictably negative consequences.

Guttmacher calls the Trump anti-abortion agenda “coercive,” noting that coercion, either through laws or policies, is often used by conservatives to withhold, ban or outlaw information women need for informed consent. While reactionary bigots claim to defend fetal life by limiting Title X’s effectiveness, they totally restrict poor women’s right to informed consent about health care — which is a direct attack on their human rights. Meanwhile, the rule has long been opposed by two national medical groups that denounce its interference with medical ethics and practice.

At the same time that DHHS has launched this attack on women’s constitutional right to abortion, it has beefed up funding for harmful  abstinence-only-until-marriage programs for teens.

As co-chairs of the Congressional Pro-Choice Caucus, Diana DeGette (D-CO) and Barbara Lee (D-CA), stated in a May 22 release: “The White House has no business censoring doctors or limiting the health information available to patients. This rule is unconstitutional, dangerous and insulting to women.” Some 212 members of Congress signed letters to the DHHS on May 15: “We strongly oppose efforts to undermine the integrity of the Title X program and harm the millions of people who rely on it for care. Federal health policy should be evidence-based and produced with the best interests of patients in mind.”

In the May 21 opinion in the case of Epic Systems Corporation v. Lewis, Justice Gorsuch misinterpreted at best or ignored at worst two New Deal rulings that established workers’ rights. Those landmark rulings were the 1932 Norris-LaGuardia Act that established “concerted activity” and the 1935 National Labor Relations Act that defined “mutual aid or protection.”

Instead Gorsuch used a ruling-class fabrication that individual employees have equal bargaining power with employers.

The law suit was brought by a junior accountant at Ernst & Young (one of three parties in the case) who alleged that the company had misclassified that job category so it didn’t have to pay overtime. In the suit he described the conditions of underpaid junior accountants and asserted his right to pursue a class claim with others similarly employed. But because he had been forced to sign an arbitration agreement as a condition of employment, Gorsuch’s majority opinion barred him from banding together with other workers to assert a class claim.

In a “blistering dissent,” Justice Ruth Bader Ginsburg noted that individual arbitration is prohibitively expensive; an Ernst & Young employee would have to pay $200,000 to recover $1,867.02 in overtime pay. Given that wage theft is rampant in all low-wage industries, as is sexual harassment in all workplaces, she asserted that the ruling was “egregiously wrong” because individual workers can’t afford expensive litigation, risk retaliation from employers or compel companies to enforce anti-harassment rules.

Ginsburg concluded: “The inevitable result of today’s decision will be the underenforcement of federal and state statures designed to advance the well-being of vulnerable workers.”

But empowering employers to require employees, as a condition of employment, to sign an agreement to forego joint legal remedy for unlawful abuse is exactly why arch-reactionary Trump nominated Gorsuch to the Supreme Court. Racist, misogynist, anti-worker Trump is intent on pandering to his fellow billionaires on Wall Street, whether with tax reforms or Supreme Court rulings.

“This is an incredible blow to workers and sets workers’ rights back literally 100 years,” concluded Rewire.News on May 22.

Working people, especially those in public sector unions, are bracing for the court’s decision in Janus v. American Federation of State, County and Municipal Employees, Council 31 due the end of June. If the Epic decision is “a canary in a coal mine,” all workers, but particularly the most oppressed, will need to unite and fight because their very lives will depend upon it.