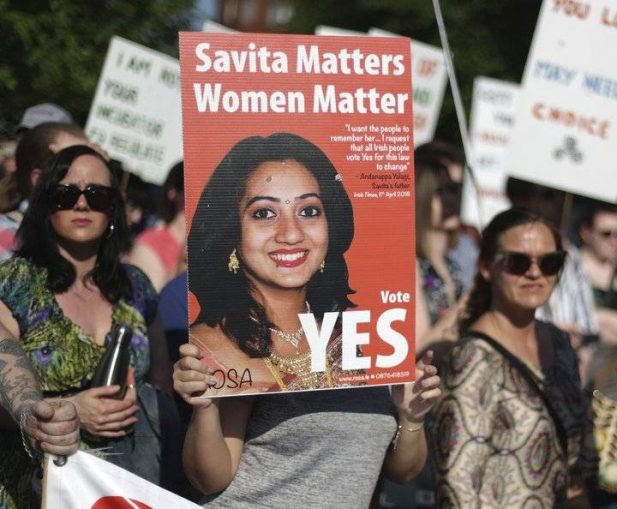 Dr. Savita Halappanavar, a member of the Indian community in Ireland, died after being denied an abortion in a medical emergency in 2012.

Joyous celebrations are taking place throughout Ireland as women cheer a historic victory in the 35-year struggle for their basic human rights and reproductive choice.  A long, hard fight by the women’s movement won a landslide vote on the May 25 referendum that repealed the anti-abortion Eighth Amendment to the Irish Constitution.

Orla O’Connor, co-director of Together for Yes, the umbrella group comprising over 70 organizations and communities that carried out this struggle, called it “a monumental day for women in Ireland.”  She said the vote was “a rejection of an Ireland that treats women as second-class citizens,” reported the May 26 Guardian newspaper.

Linda Kavanaugh, organizer of the Abortion Rights Campaign, a co-leader of Together for Yes, said the votes for this “definitive mandate” outnumbered the votes for inserting the amendment in 1983. Grassroots, community-led organizing was key to the long-awaited victory, she stressed.

She especially acknowledged the work of “migrants who did not have a vote and who were disproportionately affected by the Eighth [Amendment], as well as the many trans and non-binary people affected.”   (abortionrightscampaign.ie)

The migrant groups that joined this movement included Migrants and Ethnic Minorities for Reproductive Justice, the Immigrant Council of Ireland, the Irish Refugee Council, Doris Luimni, and the Migrant and Refugee Rights Center. Due to legal restrictions on travel for immigrants, its exorbitant costs and document requirements, many migrants could not access abortions. Access is particularly difficult for asylum-seekers, refugees, undocumented individuals and trafficking victims.

There was a higher than usual voter turnout countrywide; 66 percent of the electorate opted to eliminate the Eighth Amendment, one of the strictest anti-abortion laws in Europe.  Enthusiastic young women were the majority of voters in many polling places. Thousands of Irish people living abroad returned to their homeland to vote, some traveling huge distances, as happened with the same-sex marriage vote in 2015. The repeal referendum won in every county, except one.

Although abortion had been illegal in Ireland since 1861, this cruel amendment, which bestowed a fetus with rights equal to those of a woman, was added to the constitution in 1983. The law banned abortions, even where pregnancies resulted from rape or incest or would endanger a pregnant woman’s health or in cases of severe fetal abnormalities. It only allowed an abortion if a woman’s life was at stake.  Even so, some seriously ill women died after being denied the procedure when they needed it, as doctors quibbled over whether an abortion would be legal in each case.

Today, 3,000 to 4,000 women leave Ireland annually to obtain abortions.   Many women illegally use imported abortion-causing pills — secretly and without medical supervision. Under current law, those who seek or provide abortions risk up to 14 years imprisonment.

The referendum did not establish a new law setting forth women’s right to abortion, but will substitute this language: “Provision may be made by law for the regulation of termination of pregnancy.”  The majority vote gives the government the green light to legalize abortions up to the 12th week of pregnancy and to allow the procedure later in pregnancies under certain circumstances. The public health care system will provide abortions.  Women will gain the right to make their own medical decisions while pregnant, not be forced into or denied care.

Ireland’s Prime Minister Leo Varadkar stated that “the culmination of a quiet revolution in Ireland” resulted in voters giving the government a clear mandate to enact legislation legalizing abortions. He has pledged to enact new laws by year’s end. (Guardian, May 26)

Some 1.43 million people voted to repeal the ban, while 723,632 opted to retain it. The number of pro-choice votes demonstrates the changes in Ireland since 1983.  That year, when divorce was still illegal, and the Catholic Church hierarchy’s grip on the population was still strong, 841,000 people, the majority of voters, approved the Eighth Amendment.

The Irish women’s movement fought back then and continued to fight for a woman’s right to choose free, safe, legal abortions.  During the recent campaign, organizers, many young women wearing “Repeal” T-shirts, met with residents of every county and held rallies and meetings throughout the country.

Two stunning events strengthened support for the pro-choice movement.  In 1992, the government tried to prevent a suicidal 14-year-old pregnant rape victim from traveling to England to obtain an abortion. After international condemnation, Ireland’s Supreme Court allowed her to go to England for the procedure.  Subsequently, the law was changed to permit women to leave the country to access abortions.

Twenty years later, on Oct. 28, 2012, Dr. Savita Halappanavar, a 31-year-old dentist, and member of the Indian community, died of septicemia after the three-day miscarriage of a nonviable fetus in University Hospital Galway. She had repeatedly requested, and been denied, an abortion. Her needless, excruciating death became global news.

Outrage grew in Ireland against the inhumane abortion ban. Organizing against it intensified with mass protests around the country.  Thousands marched in Dublin and other Irish cities, and in London, following Halappanavar’s death.

In recent years, as more women have joined the workforce, the women’s movement — and pro-choice sentiment — have grown. Irish emigrants have brought back news of progressive reproductive rights laws abroad. Women have publicly told their heart-breaking abortion stories and related their horrifying experiences about being denied critical medical care while pregnant. International human rights groups and women’s organizations have increasingly pressured the Irish government to overturn the law. These factors have elevated consciousness and increased reproductive rights activism inside the country.

Revolt against church and state

The landslide victory by the Irish people was the latest revolt against the Catholic Church’s conservative, patriarchal dogma. The exposés of priests’ sexual and other physical abuse of children and the Magdalene laundries’ exploitation of women and forcible adoption, often involving the sale, of their babies, had weakened the Church’s influence over the population.

Susan McKay, a writer in Ireland, said the church tried to influence this vote, but “the church does not have the moral authority it did in ’83 … [with] revelations of child abuse and cruelty toward pregnant women — scandals the church did its best to cover up.” (nytimes.com, May 5)  Activist Bernie Linnane told McKay the anti-choice forces have “lost on divorce, gay marriage, contraception and sex education. Once the Catholic church loses on this campaign, it has lost everything.”

Cat Inglis, activist with Eirigi, a pro-socialist organization in Ireland, champions the right to abortion there and in the northern six counties. She explained: “Since the inception of the state the church has had a firm grip on every aspect of Irish life,” but it has lost many battles. “Revelations concerning the church[’s abuses] in the last 20 years” have changed public perception of the church. (RedLine, May 22)

And Gail McElroy, politics professor at Trinity College Dublin, stressed, “This [vote] is devastating to the Roman Catholic hierarchy.  It is the final nail in the coffin for them. … [T]heir hopes of re-establishing themselves are gone.” (NY Times, May 26)

Clearly, there has been a progressive shift within Ireland’s population on many social issues due to economic and social changes and the Church’s waning influence.  The Repeal vote demonstrates that most people support women’s right to make decisions about their lives, instead of being dictated to by the Church or the state.

A May 23 Irish Times editorial said the “Yes” vote would reject the “worldview that relegates a woman’s bodily autonomy below the right of the State to tell her it knows best.” The referendum’s mass approval shows society’s growing respect for women, and it is a step forward for women’s equality — not just in Ireland, but the victory will resonate around the world.

Una Mullaly, pro-choice campaigner, views the vote as not solely about abortion, but concerns the historical oppression of women — which was rejected at the ballot box.

The struggle will continue to prevent a right-wing rollback of what was won and to legalize abortion in the British-controlled north of Ireland, where women are demanding this right. In solidarity with “our comrades” there who “supported us unwaveringly,” Abortion Rights Campaign organizer Kavanaugh pledged to “support them in their separate but similar fight to gain abortion access.”