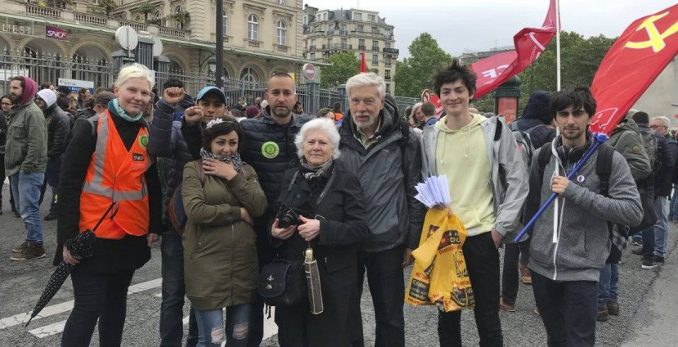 Paris, May 14 — At 4 a.m., railroad workers who have been on strike since early April began a day-long demonstration at the Gare de l’Est — one of the main long-distance train stations in Paris — to punctuate their demands.

The government of President Emmanuel Macron, a banker at the top of the French state, has been waging a fierce attack against the rights of all workers, mainly protection for their jobs. Past workers’ struggles have made it difficult for French capitalists to fire workers.

As in nearly all the imperialist countries — the U.S., Western Europe and Japan especially — conditions for the working class have deteriorated since the collapse of the Soviet Union in 1991 and the globalization of the economy. A smaller part of the working class is in unions, and many of the old manufacturing plants have closed as they became less profitable than factories in lower-wage countries.

Macron’s attacks are directed especially at the workers in the public sector, that is, those employed by the government. Among them are the railroad workers, or cheminots, and they are fighting back.

At the current time the unions’ tactics are to strike two days and then go back to work for three days. This is open ended and disrupts train traffic, which is essential to travel in France much more so than in the U. S.

Today’s demonstration saw some hundreds of workers, accompanied by smoke devices and lots of noise, gather and march around the large station in Paris. Guarding the station were some riot police officers, wearing armor and carrying shields as if ready for a big battle.

This Workers World reporter met with a group of railroad workers who were friends of the group, the Pole for the Renaissance of Communism in France (PRCF). They were optimistic about the struggle. “I think we are going to win,” said one and all.

The workers greeted Workers World Party’s presence especially because of the letter of support that WWP’s unionized workers had sent last month, which was read to workers’ meetings. International solidarity is an important part of all struggle in this globalized economy.