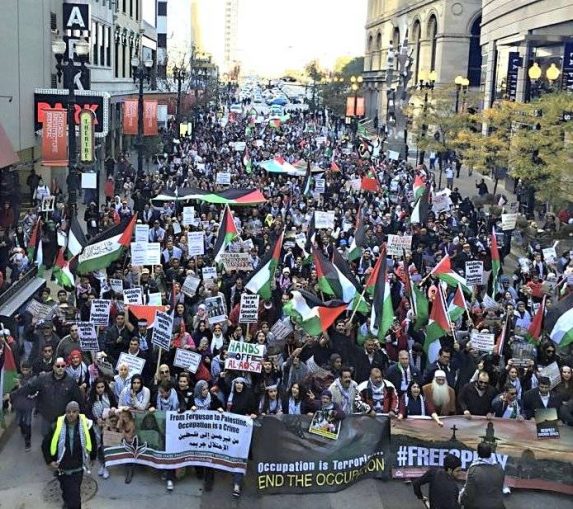 May 15 — Even as the Trump administration celebrated the move of the U.S. Embassy from Tel Aviv to Jerusalem on May 14, Israeli snipers were mercilessly gunning down Palestinian people just 40 miles away in the Gaza strip.

The Gaza Health Ministry reports that 62 unarmed Palestinian demonstrators were shot dead by Israeli troops on that one day, and thousands more were wounded. Their crime? Trying to breach the walls that keep 1.8 million Palestinians confined in a tiny, crowded strip of coast along the Mediterranean Sea under the most intolerable conditions.

In a cynical twist of the facts, the Trump White House tried to blame the Palestinian resistance group Hamas for the deaths.

This was the eighth and deadliest day of weekly protests by the people of Gaza against the theft and occupation of Palestinian land that created the state of Israel and forced them into prison-like confinement. The Great March of Return began on Land Day, March 30 in Palestine. This latest demonstration came one day before the 70th anniversary of the Nakba — the Catastrophe — when in 1948 Zionist troops forced 750,000 Palestinians from their homes and destroyed 400 of their villages. All with the blessings of the Western imperialists, the U.S. and Britain in particular.

Among those murdered by Israeli snipers were children and a man in a wheelchair, Fadi Abu Salah, who had lost his legs in 2008 when Israel bombed Gaza. Most were shot by soldiers using internationally banned expanding bullets, but a 5-month-old baby, Leila Ghandour, died from teargas inhalation.

This day of heroic struggle by the Palestinian people to break out of the Israeli prison called Gaza will go down in history. In braving the overwhelming terror exercised by the Israeli military, their resistance to oppression stands alongside that of the heroic people of Sharpeville, South Africa, gunned down by apartheid police on March 21, 1960.

The racist cops had fired straight into the crowds of African people, killing 69 children, women and men for daring to demonstrate against the settler state’s atrocious pass laws. It was a defining moment in the development of the resistance to apartheid that eventually brought down the racist settler state.

The Palestinians risking their lives in Gaza were also protesting the transfer of the U.S. Embassy from Tel Aviv to Jerusalem. This political move by the Trump administration has dashed any hopes that may have been harbored by some for a peaceful settlement of the Israeli-Palestinian struggle.

For years, as Israel built up its formidable arsenal of repression in alliance with the Pentagon, various U.S. imperialist administrations dangled the idea of a two-state solution like a carrot before Palestinian organizations and leaders of the Arab countries. Jerusalem was put forward as the likely city to encompass the capitals of both a Zionist and a Palestinian state.

This slaughter of unarmed Palestinian protesters, and the simultaneous move of the U.S. Embassy to anoint Jerusalem as the capital of the Israeli state, should make it now clearer than ever to the whole world that Israel has always been a project of Western imperialism, not a refuge for Jewish people, as has been claimed for so long.

Zionism a cover for another racist settler state

In 1948, Zionism, the reactionary political movement behind the establishment of Israel, denied the very existence of the Palestinians. They claimed that the European settlers who invaded Palestine were building “a land without a people for a people without a land.” But the resistance of the Palestinians to draconian Israeli rule is proof enough that the people of Palestine existed then, exist now and will continue to fight to take back the land they have lived in and sustainably cultivated for generations.

Zionism was given a big boost by the British ruling class in the Balfour Declaration, issued in 1917, which encouraged the establishment of a Jewish state in Palestine. At that time, few Jewish people supported Zionism. Instead, they struggled against anti-Semitism in Europe as well as in the U.S.

That anti-Semitism took on monstrous proportions in Germany with the triumph of fascism. Hitler scapegoated and massacred Jews as well as Slavs, communists, gays and lesbians, and Roma people for the immense hardships that had in reality been caused by the capitalist depression of the 1930s.

After Germany’s defeat in 1945, the U.S. as well as Britain, which had controlled Palestine since World War I, conspired to promote it as a haven for the Jewish people who survived the Nazi Holocaust. They armed it against the rising tide of Arab liberation sweeping the area, even to the point where Israel is now the third-largest nuclear power in the world.

As these imperialists gave away Palestine, they never consulted the Palestinian people, acting as though they didn’t exist.

But the Palestinian people do exist, and they have been courageously fighting for their rights as a nation ever since. This move by the U.S. government and the billionaire ruling class behind it only further exposes their predatory use of Israel as a battering ram against the peoples of the entire Middle East.