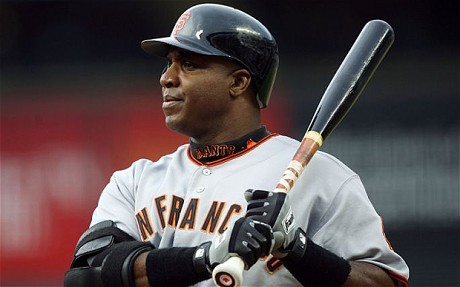 Colin Kaepernick is a great example of an athlete who is politically active and a true leader of the anti-racist struggle.

However, we should not forget what was done just a decade ago to Barry Bonds by the racist USA ruling class.

While Kaepernick is a truly gifted athlete, Barry Bonds was the greatest Home Run King in the history of Major League Baseball.

The MLB Home Run King is, along with the heavyweight boxing champion, considered the highest individual sports accomplishment in U.S. athletics.

As Bonds’ home runs piled up, so did the attacks of the white corporate media pile up.  He was never proven to have used performance-enhancing drugs (PEDs). Bonds was subject to frequent, unannounced urine tests for PEDs, over the last several years of his baseball career, but nothing was ever found, as his home runs continued to mount.

What could the corporate team owners do to punish him?

They could get no evidence from the urine tests to officially banish him from MLB to stop his relentless smashing of the Home Run records.

In 2007, Barry Bonds had a typically great season. He was, in my analysis of hitter performance, the very best hitter in the National League, and only Alex Rodriguez (another victim of the steroid witch hunt) in the American League, bettered Bonds’ performance, but only by a single point.

In 2008, Barry Bonds was, like Kaepernick, denied employment. No MLB team would offer him a contract!

It is ridiculous to believe that there was not a general agreement among the corporate team owners to deny employment to the very best hitter in the game!

The witch hunt against Barry Bonds involved the slanderous attack on his accomplishments involving claims of steroid use.

The claim, however, that home runs and improved baseball performance were steroid induced, has no basis in science.

When Babe Ruth started hitting enormous numbers of home runs a century ago, the corporate media came up with the false claim that a “lively ball era” had been introduced, a period in the 1920s when baseball popularity exploded. Nothing of the sort had happened. Smaller ballparks that induced hitters to “swing for the fences” was what actually happened.

Likewise, in the 1990s, as the homers increased all around MLB, with Bonds leading the way, a new “lively ball” excuse was found in steroid use.

No proof was needed that it was the actual cause of the increase in home runs in order to induce a frenzied witch hunt.

‘McCarthyite” congressional-staged hearings dragged some of the greatest home run hitters in front of the national corporate media, headed up by Sen. John McCain, a buddy of President George W. Bush, the owner of the Texas Rangers MLB team.

As a result, a frenzy against steroid use was created, and the great home run hitters of the era were convicted without a scintilla of proof that steroids were the cause of the increase in home runs!

The single “proof,” repeatedly offered by the racist corporate media, were that steroids were the cause of the home run increase at an all-time high.

That sole “proof” came crashing down last year during the 2017 season when MLB had the highest home run totals in history!

So where’s the proof NOW?

The home run “explosion” was a product of smaller ballparks and the expansion of the MLB into Colorado and Arizona, the two most “hitter friendly” ballparks, along with players realizing that hitting home runs was what would give them more notoriety and bigger paychecks.

Isn’t that just like what happened at the time of Babe Ruth?

While Barry Bonds was performing at such a high level in the public eye, the most destructive and viciously slanderous attacks he was subject to must be viewed as completely racist!

Bonds was defenseless against these vicious and racist attacks. That simple fact makes him a victim of racism that we are required to defend.

Barry Bonds should be revered for his amazing athletic accomplishments!

We must never forget what was done to him!

We must continue to defend the MLB players of that era from the stigma that has been heaped upon them!

Barry Bonds was, in player performance, this era’s Babe Ruth!

The refusal of the corporate media to acknowledge Barry Bonds’ greatness and their refusal to vote Barry Bonds into the Baseball Hall of Fame is a racist act that must not be left unanswered!

The only asterisk next to Barry Bonds’ name in the Major League Baseball record book should be an asterisk stating that his home run numbers would have been EVEN GREATER had the corporate team owners not decided to deny a contract to Barry Bonds for the 2008 season.

Do not allow ANYONE to denigrate the MLB players from the falsely proclaimed “Steroid Era!”

You are only playing into the corporate media and corporate team owners’ witch-hunt!

Barry Bonds was, and is, the greatest Home Run King of all time! Let’s not let ANYONE deny that!

Mike Gimbel, former consultant on player evaluation for the Boston Red Sox and the Montreal Expos (now Washington Nationals), was a pioneer in the use of statistical analysis of Major League Baseball player performance.