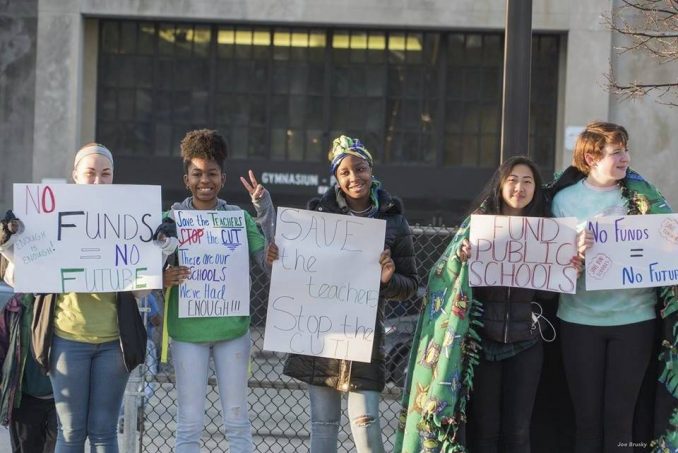 This is a lightly edited version of a talk given at the Midwest Marxist School in Detroit in April 2018.

In late February, education workers in all 55 counties of West Virginia went on strike for nine days. They ultimately won their strike demands despite the state’s right-to-work (for less!) status and the unions’ attempt to end the strike prematurely. Since then, public school teachers in Oklahoma, Arizona, Puerto Rico and, most recently, Milwaukee, have picketed or engaged in work stoppages to challenge the economic austerity policies that have stagnated their wages and destroyed public schools.

Whenever education workers engage in class struggle, leftists (and I use this term the way it’s used colloquially in the U.S., broadly: those who are opposed to hierarchical divisions of society based on class, race, gender, and other factors) become engaged in an old argument about the education system under capitalism. Since the West Virginia strike, this argument has been circulating again, so I’d like to briefly talk about some of its foundations and some of its misuses. Then I’d like to explain why we as communists support education workers when they exercise their power to resist ruling-class attacks.

For a long time, leftists have been aware of the public education system’s potential role in supporting capitalist social relations that reinforce the power of the ruling class. Schools controlled by the capitalist state can be used to transmit ruling-class ideology, ensuring the transmission of cultural capital across generations and socializing children into the dominant hierarchies of being.

Some arguments take these conclusions a step further by claiming that teachers, by their participation in such a system, are doomed to transmit ruling-class ideology even though they themselves are working-class. This argument is often made by comparing teachers to cops. People who make this comparison assert that institutions of education play the same role as institutions of armed repression because the capitalist state administers them both and the state wants to reproduce capitalist social relations at all costs.

There are, superficially, similarities between those two institutions, schools and prisons. Both are usually run by the state, although sometimes privatized. Both involve physical control over the bodies of young people. But the important differences between these institutions have to do with who them and why they exist in the first place.

The police are accountable to the state and its law first and foremost. They are trained, socialized and required to uphold laws which systematically favor property, patriarchy and white supremacy. Modern policing arose as a way for the ruling class to control large groups of people: striking workers and slave insurrections.

Both the origin and the current function of policing are such that instituting direct community control of this institution — making cops directly accountable to the people who live under the law — would end policing as we know it. The police as an institution are defined by their role in a system of domination: it makes no difference to this institution if the people who have to live under these laws agree with them or not. There is no possible way to reform the police without fundamentally changing the nature of policing.

Public education, on the other hand, is not — at its origin — a project that serves the ruling class. Fundamentally, teachers have the potential to exercise much more autonomy than the police in the performance of their job. This doesn’t mean that public education cannot be used by the ruling class to reproduce social relations that favor capital and maintain inequality and white supremacy. A school can be a tool for social discipline, an incubator for a compliant work force and a way for liberals to support the mythology of meritocracy in the U.S.

But free universal public schooling can also be, and has been, something that working-class and oppressed communities have fought for and that the ruling class has, vehemently, fought against.

This is because schooling has not always been solely a ruling-class project in the way that policing has been, and because, when schooling has threatened to turn into such a project, students, parents, teachers and their communities have resisted. Teachers and their unions have fought to keep legislative interference, which serves the interests of the ruling class, out of their classrooms.

In addition, striking education workers frequently raise demands that highlight radical goals beyond their own wages (though those demands are just and valid too). In Oklahoma, education workers specifically included in their demands a call to repeal a capital gains tax exemption, which largely benefits the wealthy, that reduced funding for public schools.

The March teacher strike in Puerto Rico against public school closings, and the expansion of charter schools to replace them, was a battle in the larger struggle against the U.S.-instigated privatization-for-profit of public services. Arizona teachers included in their demands an initiative to increase taxes for incomes greater than $250,000 to fund schools. Teachers are striking for students, families, their communities and the institution of free, accessible education for all.

The ruling class obviously would rather use the education system as an incubator for labor-power than allow it to be a resource for the working class. Their first option will always be to limit education to technical skills or whatever is necessary to simply reproduce labor-power in the configuration that capital requires.

Historically, teachers have had the power to actively resist the demand to produce generations of compliant workers. In response, the ruling class has spent their time and money both attacking public education itself and attempting to use schools as sites to promote their own ideology.

A politicized, powerful, education worker movement can ensure that control over what children learn is in the hands of the working class: the teachers — rather than the ruling class: the administrators and policymakers who serve capital.

If the argument is that U.S. schools serve to reproduce the social conditions of capitalism, with all its racism, woman-hating and more, it’s an obvious result that a shift of power away from education workers toward the ruling class would only intensify this.

Attacking education worker struggles helps the ruling class use the education system for their own goals: a compliant working class, the reproduction of white supremacy and the protection of their own capital accumulation.

The ruling class recognizes that, when teachers are unionized and legally protected from right-wing retaliation, those teachers can hold leverage over significant ideological institutions that are funded through progressive taxes and constantly threaten to slip out of ruling-class control. Politicized school workers’ movements remain the way forward in making sure that schools do not simply act as cogs in a machine of repression.

This is why free public education for all, with education workers who have autonomy from ruling-class interests, should be a transitional demand in a capitalist state.