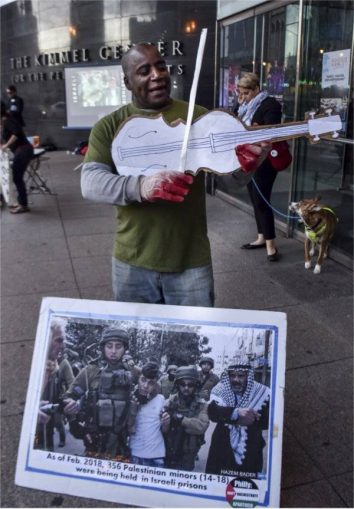 For the fourth week in a row, Philadelphians gathered outside the Kimmel Center on April 28 to protest the Philadelphia Orchestra’s upcoming trip to Israel. Activists performed street theater, showed a video projected on an outdoor screen, spoke and chanted before a scheduled concert.

The campaign urging the orchestra to cancel its trip was given new energy following the publication of an opinion piece in the Philadelphia Inquirer on April 27 by one of the campaign organizers.

Author Susan Abulhawa wrote: “By performing in Israel, the orchestra will provide musical accompaniment to the world’s last settler-colonial state, at a time when other artists are canceling appearances there following the Palestinian call for a global boycott (BDS) of Israel, modeled after the South African anti-apartheid boycott.

“Among the strategies Israel has launched to combat BDS is ‘Brand Israel,’ a propaganda initiative that seeks to exploit culture to divert attention from Israeli crimes. Arye Mekel, Israeli deputy director general for cultural affairs, explained it as the ‘way you show Israel’s prettier face.’

“The Philadelphia Orchestra’s trip to Israel is part of this strategy. … The itinerary (open to orchestra members and patrons joining the trip) boasts multiple visits with military personnel, including a ‘VIP visit to an IDF [military] base.’ This is the same military that has killed 42 Palestinians and wounded 5,000 more in the span of just four weeks. A video of snipers celebrating after shooting an unarmed Palestinian man in December was leaked and immediately went viral. In response, Israel reprimanded the person who filmed the shooting and is seeking to criminalize future videos of crimes against Palestinians.”