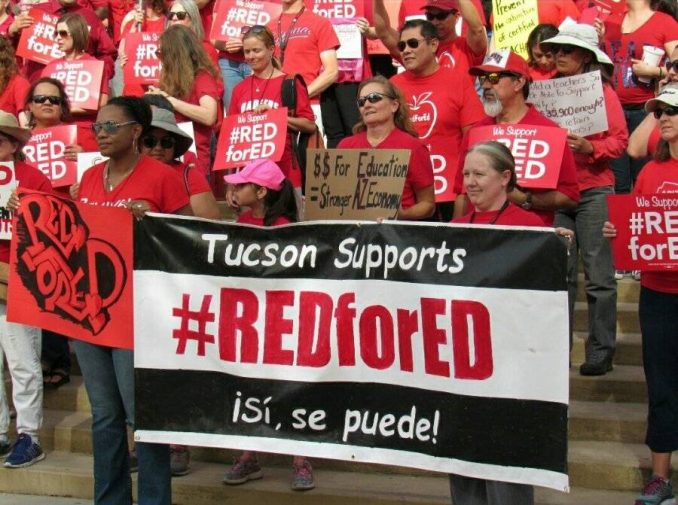 Teachers and all school workers are on the march, protesting pay so low some have to sell their blood to make ends meet. They are also marching for their students, who are trying to learn in overcrowded, mold-infested rooms using outdated, battered textbooks duct-taped together.

School bus drivers, teachers’ aides, cafeteria workers are also fighting for job security and to keep their first-in-the-morning and last-in-the-afternoon steady presence for the children.

The big business media have made much of the fact that school worker actions are happening in Republican-dominated states that “went for Trump” in 2016. But education workers are not marching because of who they might have voted for.

They are rising up because their work with students and their workplace conditions have been devastated by austerity attacks. Education funding has withered while megabucks have gone to the already super-rich bosses and the military/industrial/banking complex.

In Puerto Rico, members of the Teachers’ Federation (FMPR) have been tear-gassed and attacked by police for protesting the predatory Big Bank interests now deciding the fate of public schools there. The U.S.-imposed Fiscal Control Board is hell-bent on closing hundreds of schools and firing school workers.

After the Great Recession of 2008, banking interests gained a chokehold in Puerto Rico as it struggled with heavy municipal debt. Current FCB members, who were then banking executives, arranged loans, got big “fee service” payoffs and millions in interest for their banks. Now the banks want to loot public programs to get more millions — including closing and privatizing schools.

A similar fate befell Detroit, Mich., after its city bankruptcy. Detroit teachers held months of rolling “sickouts” there in 2015 and 2016 to protest the takeover of public schools by bought-and-paid-for politicians who placed bank profits before the lives of children.

In recent strikes in West Virginia and Oklahoma, education workers pointed to Big Oil as the major reason why pay for predominantly women teachers had hit rock-bottom, relative to that in the rest of the U.S., with school funding still at 2008 levels. In Oklahoma, where education funding dropped almost 24 percent over six years, Big Energy pays single-digit taxes on gross production, while some companies given tax loopholes pay nothing at all. (See previous Workers World articles on both state strikes.)

An Oklahoma student carried a sign at one demonstration against the hostile state legislators: “If we bled oil, maybe they’d care.” West Virginia taxes on oil and gas are at a small 5 percent, and were reduced in previous years even as public services desperately needed funding.

Teachers are marching in Colorado, where the state has underfunded education by $6.6 billion since 2009. Teacher salaries after inflation dropped 17 percent in the last 15 years. (Colorado Education Association)

Instead of taxing Big Energy businesses, Colorado has funded education by taking money out of teacher and school worker paychecks.

Meanwhile, the U.S. government is desperate to find money for its ongoing military expansion. Trump’s 2019 federal budget would boost defense spending by $777 billion over the next 10 years, while deeply cutting nonmilitary programs. (vox.com)

And who benefits most from all the wars? Why, Big Oil, of course, along with the war industries.

Under the proposed budget, funds for the Department of Education would be cut by over $3 billion, while private school vouchers and other “school choice” programs paid for with taxpayer money would increase by over $1.6 billion. Also cut would be grants for summer- and after-school programs and other services that support students who are low-income, first-generation or have disabilities. (Washington Post, Feb. 16)

The result is an across-the-board federal reduction in funding for public schools. This will affect school workers coast-to-coast — from the Los Angeles bus drivers, special education aides, cafeteria workers and other school staff who recently voted to strike, to the Georgia school bus drivers in DeKalb County, a majority Black workforce, attempting to organize there.

Schools are getting hit because Big Brass want the bombs and drones, and the military-industrial complex wants its mega-profits.

Up against these mammoth forces, school workers are fighting back and asserting their power to withhold their labor to win better lives for themselves and their students. Despite being denied the right to strike in many “right-to-work” (for less) states, despite being threatened with jail and loss of their jobs, they are defying state governments and walking out.

These education workers are reforging a labor movement in solidarity with their communities.

On the frontline in the war now underway on peoples’ needs, education workers, alongside the children in their schools, see every day the impact of Immigration and Customs Enforcement raids on im/migrant families, the terror of racist police violence on Black and Brown communities, the sickness and pain from privatized poisoned water systems and for-profit food, and the injustice of the school-to-prison pipeline.

The school workers are defending public education, each other, their students and their communities. Their outrage is spreading, and they are saying: “We won’t back down!”

We are with them, and we say: “Make the banks, the bosses and the military brass pay!”