In a victory for a select group of jobseekers, Target Corp. is being forced to get rid of its racist criminal background checks. As part of a class action lawsuit won by the NAACP Legal Defense and Education Fund, Target will pay a total of $3.4 million to individuals and donate $600,000 to five organizations that help people with criminal records find work.

According to court documents, 41,000 African-American and Latinx applicants with records were denied jobs between May 2008 and December 2016. Applicants expressed frustration with the broken criminal justice system — disqualification because of misdemeanor convictions going back 10 years, conditional offers turned down based on decades-old drug convictions, and more.

The settlement, filed April 5, will now allow those applicants to be eligible for priority hiring or interviewing, with restitution for each one of up to $1,000. Consultants will recommend changes to Target’s background check guidelines, reducing the list of convictions that bar workers from jobs and allowing jobseekers to appeal. (Minnesota Star Tribune, April 5)

This settlement has massive ramifications. With 1,800 stores, Target’s new hiring practices will allow access to thousands of steady, stable jobs. In order for jobs in the U.S. to be a human right — as they are in Revolutionary Cuba — all barriers need to be removed. La lucha continua!

The Walt Disney Co., with revenues of $55 billion in 2017, employs about 125,000 people at its entertainment centers in California and Florida. Earlier this year Disney said it would share its reward from tax cuts — a $1.6 billion windfall last quarter — so that each nonmanagement worker would receive a $1,000 bonus. (NPR, Feb. 22)

The caveat? Disney demanded that its unionized workers who were negotiating contracts — represented by 11 unions at Disneyland in California and by the Service Trades Council coalition at Disney World in Orlando — agree to an austerity contract that both groups had already rejected. Calling this illegal, the unions promptly filed a complaint with the National Labor Relations Board.

The California unions are calling on Disneyland to raise the base wage to $20 an hour after a survey of 5,000 workers found that many were hard-pressed to pay for food and medical expenses and that 11 percent had experienced homelessness in the past two years. The 125-page report, “Working for the Mouse,” showed that more than half of Disneyland workers make less than $15 an hour, and some live in cars or motels. (ocregister.com, March 7)

Meanwhile, on April 4, hundreds of hospitality and housekeeping Disney World workers, custodians, ride operators and cast members marched to Disney Springs, an outdoor shopping and entertainment complex, and handed out signs stamped “End Disney Poverty.” As one worker said, “Disney wants you to make magic for the guests, but they don’t give magic to the cast members.” (Shadowproof, April 4) 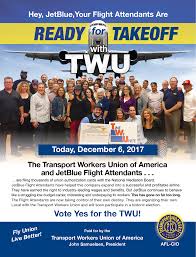 The push to unionize nearly 5,000 JetBlue flight attendants took off April 17 with a 2 to 1 vote in favor of joining the Transport Workers Union. Obviously, the workers didn’t buy the company’s anti-union, anti-worker tactics — like offering flyers $25 to report attendants who use cell phones during a flight or violate company regulations.

TWU plans to start contract bargaining “immediately,” according to a statement by TWU President John Samuelsen: “This historic victory is yet another example of the tide turning in America as workers collectively fight back to defend their livelihoods.” He added: “The number of working women and men in unions increased last year — for the first time in decades. The JetBlue vote is a strong sign that the upward trend is continuing this year.”

More than 200 workers and their supporters joined the fightback against wage theft at an April 10 town hall in southwest Washington, D.C. The meeting, sponsored by the many local labor and community organizations in DC Just Pay Coalition, announced the release of a new report, “Making Our Laws Real,” on how rampant wage theft, combined with lax enforcement of labor laws, cost workers across the U.S. more than $15 billion last year.

“I worked three different retail jobs in D.C. and my wages were stolen in one way or another in each one,” said Project Retail member Kristi. Jaime Cruz of Trabajadores Unidos DC noted: “Because of bureaucratic barriers and delays, workers have to turn to community groups like ours to seek justice. We need to end the wage theft epidemic.” (dc.labor.org, April 12)