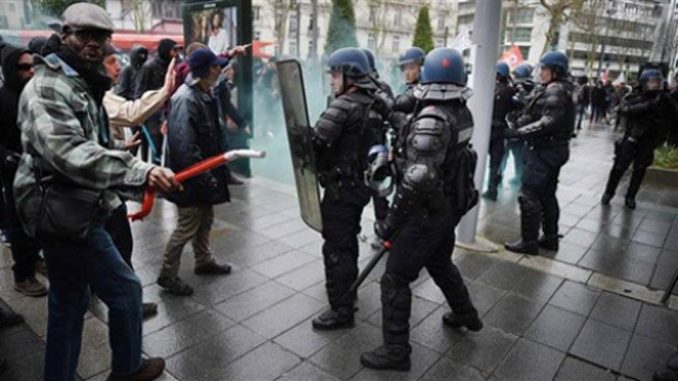 Protesters face riot policemen while members of associations, unions and collectives, supporting migrants but also occupants of the ZAD (zone to defend) of Notre-Dame-des-Landes, demonstrate against evictions on March 31 in Nantes, western France.

April 22 — France is no stranger to strikes and demonstrations. But in this early spring, the atmosphere is unusually tense. The president’s statements and media reports that order is being restored are so frequent that one can only suspect something serious is in the works.

Dissatisfaction has risen a notch in recent weeks, thanks mainly to President Emmanuel Macron. He says he’s paying close attention to the protests and is ready to hold talks with his critics, but he orders all those on the move beaten back.

In mid-April, he sent 2,500 soldiers to evacuate about 100 radical activists from the “zone to defend” (ZAD) in Notre-Dame-des-Landes in western France. These activists, from ecological and autonomous movements on the extreme left, had prevented construction of an airport there.  They continue to occupy parts of the area, which they have transformed into open-air squats, seeking alternative, collective agricultural spaces and rejecting private individual ownership.

The day after the soldiers intervened, five times as many people joined the “Zadists” to face the “forces of order.”

At the same time, Macron launched the CRS riot police to dislodge students occupying the Sorbonne and Tolbiac to protest “educational reforms.” Students immediately occupied — or reoccupied — other universities, as in Nanterre, and even Sciences Po, a highly prestigious school from which the French president himself graduated. In Lille, students were forced to take their exams between two rows of police officers.

Some 300,000 people came out across the country for the national “interprofessional day of action” called by the CGT union confederation on April 19. In Paris the demonstrators were met with water cannons and tear gas grenades, although nothing serious justified the repression.

Lacking popular support, Macron sought to demonstrate his strength by sending troops to attack the peaceful resistance. Since the big banks support him, it’s true he has something to feel strong about — strong enough to declare class war. And he can defy the people, in the name of “necessary reforms,” in contempt of social dialogue.

Today, Macron wants to break the backbone of the workers’ movement. He takes aim first at the railway workers, who stand at the forefront of the defense of public services and who enabled the protests to crystallize.  Macron is acting like Britain’s Margaret Thatcher did in the 1980s when the Conservative government broke the miners’ strike.

On April 3, however, the first day of the 36 national strikes planned by the French rail unions, the Anglo-French company Eurostar bosses, in charge of the high-speed railway service connecting France to Britain, tried to move workers from the Leyton depot in east London to Paris. Thanks to a joint action by the CGT and the RMT — the British trade union covering the transport sector — French and British workers organized to stop the scabbing. This illegal attempt to break the strike by using British employees was foiled by international workers’ solidarity.

The stakes in this struggle are high. Two visions of society are at odds: One, presented as “outdated,” is that of solidarity, social justice, renewed hope for youth and a common future; the other, neoliberal, the strategy of the elites, is destined to fail and leaves the majority of the population stuck in its tracks. How long will this majority — the world of labor — shrink from confronting the privileged minority that is crushing it?

How can workers find unity?

On April 19, workers in the chemical, electrical and gas industries entered the battle. A war of attrition — the regime against the workers — is at hand. The question asked this April 19 is the right one: How can the workers find, in their common struggles, the conditions for unity?  Despite splits among the unions — in which younger generations are discovering what their elders have long known: that the social-democratic factions betray the workers — a labor front is emerging.

Certainly, for the time being, the forces of the political left are not up to the challenges. The refusal to discuss the impact of the euro as the common currency, as well as the straitjacket imposed by the big European bankers and bosses, blocks advancement. Only this lack of organization on the political left allows the bourgeoisie to continue to sleep easily. Meanwhile, the far right — the National Front and its fellow thinkers — is keeping a close watch.

Similar music is being heard today. Last week Macron sang to us the “chemical weapons” verse sung by George W. Bush 15 years ago as a pretext to invade Iraq. Macron then obediently went to war behind Donald Trump and British Prime Minister Theresa May to bomb Syria. These are the warrior faces of capitalism.