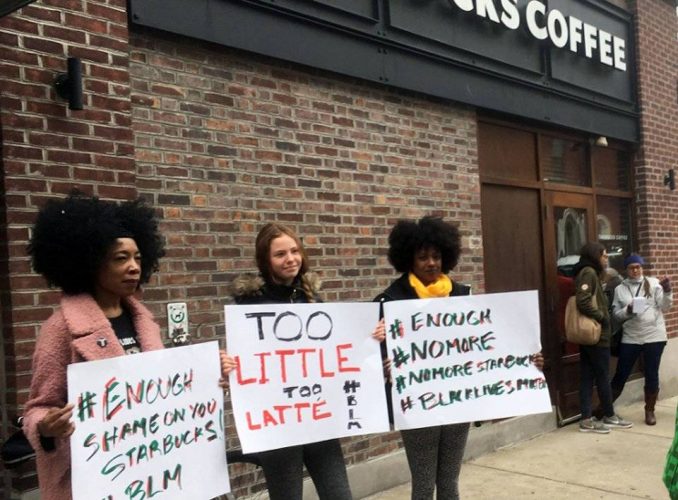 In a demonstration against white supremacy, Philadelphia protesters occupied the Starbucks at 18th and Spruce streets early on the morning of April 16. The occupation was organized by Philly for REAL Justice and the Black and Brown Workers Cooperative in response to the racist arrest of two Black men in that store on April 12.

A Starbucks employee called the police on the two men simply for refusing to leave the store while waiting to meet a business associate. According to 911 records, the call was placed within two minutes of the men asking for, but being denied, use of the restroom. Twenty minutes later, the two were confronted by six police officers, handcuffed and held in custody for more than eight hours before being released, uncharged. All that for simply existing while Black in a white supremacist space.

In a statement, organizers of the April 16 demonstration demanded that the employee who called the police be fired; that Starbucks issue an apology to the arrested men and the Black community at large; that the police who arrested the men be fired; and that Starbucks draft a policy to explicitly disallow employees from calling the police on community members. The April 16 store occupation was one of several demonstrations at the store since the arrests

Starbucks to use racist ADL for “racial-bias” training

Starbucks has since issued an apology, but they have not officially fired either the employee or the store manager responsible for facilitating the arrests. Starbucks has announced that they will close all 8,000 U.S. stores on May 29 for “racial-bias” training — as if white supremacy can be washed away in an afternoon. But the training workshops are nothing more than neoliberal publicity.

Starbucks has asked the Anti-Defamation League, a racist, Islamophobic, anti-Arab and pro-policing institution to handle their “racial-bias” training.  The ADL sponsors joint U.S.-Israeli Defense Forces law enforcement training, which includes Philadelphia cops. For decades, the ADL has illegally spied on Arab students, as well as U.S. progressive and left organizations. (Electronic Intifada, May 14, 2013)

On April 19, after initially staunchly defending the cops handling of the incident, Philadelphia Police Commissioner Richard Ross issued a public apology to the men, stating he “failed miserably” in handling the situation.

Philadelphia Mayor Jim Kenney responded by saying none of the police officers involved will be fired or disciplined, making clear the extent that white supremacy pervades the very fabric of U.S. power structures.

During the April 16 action, demonstrators occupied the Starbucks for more than three hours with anti-racist, anti-police chants and speeches from community members.

Cornelius Moody of Worker’s World and REAL Justice spoke on how Philadelphia has enforced discrimination against Black people by funneling money into police programs amidst a budget crisis. While poor people of color are targeted through the recent “sugar tax,” Starbucks avoids paying the tax on its products through legislative loopholes.

Shani Akilah, co-founder of the Black and Brown Workers Cooperative, pointed to the intersection of domestic anti-Blackness and global racist imperialism, saying: “The best way you can show solidarity with Palestinians, with Syrians, with Puerto Ricans, is to know how you are bombing Black and Brown people here.” Akilah referenced the Philly Don’t Orchestrate Apartheid protest of the collaboration of the Philadelphia Philharmonic Orchestra with the Israeli government, as well as the April 14-15 protests of the U.S. bombing of Syria.

Mike Wilson of Worker’s World and REAL Justice put the Starbucks incident in the context of white supremacy’s long history: “Starbucks is but a small, small part of what’s going on for us. … We have to fight this all along the way. And if you’re young, you’re Black, you’re Brown — you’re gonna fight this ’til your grave.”

On April 19, the two men involved, Rashon Nelson and Donte Robinson, appeared on ABC News’ “Good Morning America” program to publicly share their story. They explained they were waiting to meet a potential business partner when cops entered the restaurant: “It was just, ‘Get out, you have to leave. You’re not buying anything, so you shouldn’t be here.'” (abcnews.go.com/GMA/News, April 19)

“There was no reasoning,” Nelson said. “They just kept using ‘defiant trespassing’ as their excuse for putting us behind bars.” Robinson revealed that police never read them their Miranda rights, just handcuffed them and held them in custody for eight hours.

One of the chants during the store occupation was “Anti-Blackness anywhere is anti-Blackness everywhere!” The demonstrators proved that truth, making it perfectly clear that one incident in one Starbucks was only one symptom of the disease that is white supremacy. Whether through microaggressions, gentrification, police brutality or international warfare, white supremacy targets Black and Brown people. The April 16 demonstrators placed this struggle in the context of the larger struggle for liberation from racism and oppression in all its forms.