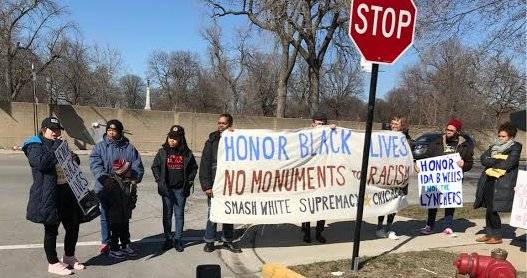 Activists and community members speak out against white supremacy across the street from the Confederate Mound in Oak Woods Cemetery in Chicago, April 6.

Near a busy corner on Chicago’s South Side, on April 7, cars slowed and passersby honked or raised their fists in support at the sight of a small group holding a banner proclaiming, “Honor Black Lives — No Monuments to Racism.”

Chants of “You can’t stop the revolution! Black women bring the solution!” rang out as more activists and community members gathered to demand the removal of a monument to Confederate soldiers known as the Confederate Mound. The 50-foot marker dominates Oak Woods Cemetery in the Black working-class neighborhood known as Grand Crossing.

Since last September, members of Smash White Supremacy-Chicago, led by Black Youth Project 100 and the local branch of Workers World Party, have gone door-to-door in Grand Crossing to investigate the impact of the Confederate monument on the people who live in its shadow. They were also promoting BYP 100’s #HonorHerLabor campaign to replace the monument with a statue of anti-lynching activist Ida B. Wells. The grave of that legendary African-American journalist, newspaper editor and anti-lynching activist rests just yards from the Confederate Mound.

Canvassing extensively throughout the area, the volunteers also made sure community members were aware that the federal government spends $250,000 annually on restoration and upkeep for the monument, and that a racist organization known as “Sons of Confederate Veterans” rallies there regularly. Many of those canvassed hadn’t been aware of the nature of the monument, but expressed outrage that such a racist presence would be allowed to exist in their neighborhood.

Those who were aware of the statue’s meaning pointed out the insult of its proximity to the graves of Black freedom fighters such as Ida B. Wells and Harold Washington, the first Black mayor of Chicago. This author spoke to a few residents who stressed that the monument is a slap in the face to the descendants of Black Southsiders who escaped slavery-like conditions in the South by coming to Chicago in the period known as the “Great Migration.”

Another resident referred to the “little parties” that Sons of Confederate Veterans hold every spring. These rallies feature the flying of the pseudo-historical Confederate flag, now used as an international white supremacist symbol. Most alarmingly, in a city fraught with gun violence, guns are fired in a “military salute.”

SCV members and other supporters of the monument say the rallies are nothing more than memorial rituals for over 4,000 soldiers buried around the Confederate Mound. These were casualties of Chicago’s Civil War era Camp Douglass, where prisoners of war were kept. Conditions there became crowded after the Confederacy refused to treat captured Black Union soldiers as prisoners of war, instead selling them back into enslavement. As a result, the Union stopped participating in prisoner exchanges.

But after Reconstruction, the white ruling classes of the South and North joined forces to fund the construction of the monument as a symbol of national unification under the banner of racism.

The April 7 rally across from the cemetery was small but impactful, prompting extensive media coverage — including a full-page article in the Chicago Sun Times — and angry reaction from supporters of the failed Confederacy.

Remarks from organizers reframed the growing national debate over monuments that glorify the racist and genocidal roots of the U.S. Speakers
focused on the social, psychological and economic impact of racism on people who fight to survive in a society that does not honor their history of struggle for liberation or, indeed, their lives.

With support from the Grand Crossing community, Smash White Supremacy-Chicago plans to protest the next rally by Sons of Confederate Veterans at the Mound, scheduled for April 22 at 11 a.m. This will be the next step in addressing ways white supremacy still lives on in Chicago — the next step in opposing the glorification of racist fantasy at the expense of living Black people.