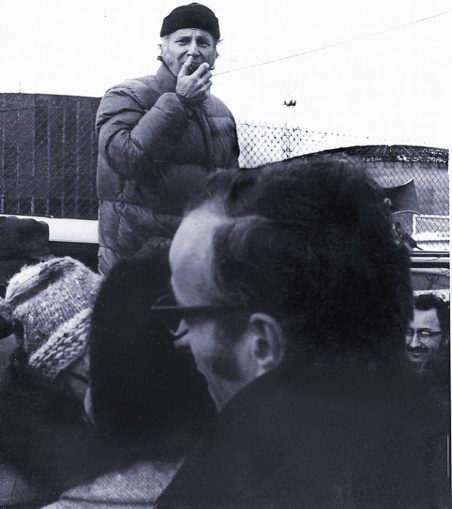 Milt Neidenberg’s comrades, family and friends gathered in New York City on March 31 to celebrate his life. In moving tributes, they recounted the guidance he provided in labor and revolutionary struggles over the past 60 years and the creative, bold tactics he devised to fight the evils of capitalism and protect workers.

Milt, a founding member of Workers World Party, who died on Feb. 4 at the age of 96, was a steelworker in Buffalo, N.Y., and later a unionized worker in New York City. His experiences and application of Marxism in the class struggle enabled him to develop winning strategies. As comrades said, he was their “secret weapon.”

Tony Murphy recalled that Milt started every phone conversation with “What’s cooking?” “We marveled at his ability to break things down, to tell you what was underneath the phenomena you were seeing and dealing with,” Murphy said. “It wasn’t magic. It was Marxism. Marxism is knowing our society is built around the exploitation of labor and all these institutions are designed to protect that.”

Party members and friends shared accounts of union struggles in which Milt played a role, from the 1968 racist teachers’ strike against Black community control in Ocean Hill-Brownsville in Brooklyn to the Harvard University Dining Service workers’ strike in 2016.

Vondora Jordan spoke about Milt’s support of the Workfairness campaign of the mid-1990s. A group of workfare workers and supporters, backed by the American Federation of State, County and Municipal Employees District Council 37, fought to unionize recipients of public assistance who had been forced into what had been union jobs. Workfairness activists also accompanied public assistance recipients to administrative hearings to advocate on their behalf when the city attempted to harass them or push them off the rolls.

Milt fought for the rights of all working-class and poor people to earn union wages, Jordan said. “I wasn’t that worried because Milt was right there. I loved him dearly.”

Mary Kaessinger worked with Milt in the Center for United Labor Action, which WWP initiated in 1971 to further the class struggle. She did a “mic check” shout-out: “Comrade Milt, leader, mentor and friend. Comrade Milt, Presente!”

Dave Sole, a leader of the Detroit branch, recalled Milt’s help when the AP Parts Plant was on strike in 1984. “Milt found an article in the Wall Street Journal exposing that AP Parts sold almost all its products to General Motors, and GM was demanding that AP Parts and other suppliers lower wages and benefits.” Dave brought this information to the United Auto Worker Local president, who then took hundreds of AP workers right to the doors of the GM building, where they picketed during the opening day of UAW-GM contract talks. “Milt helped us see a tactic that transformed their struggle, and they eventually won,” Sole said.

Worker organizer Bryan noted that Milt’s lessons were incorporated into the recently victorious West Virginia teachers’ strike, particularly the lesson that legislation follows the struggle in the streets. (There is not enough space here to share all the wonderful talks, which can be accessed at workers.org.)

Milt is especially admired by the members of United Steelworkers Local 8751, Boston School Bus Drivers Union. He was their mentor for more than 44 years, guiding them through strikes, injunctions and the historic two-year battle against the unfair and illegal practices of Veolia Transportation Inc./Transdev.

Party Secretariat member Fred Goldstein described Milt’s ability to gain the confidence of the bus drivers, who are mainly Haitian. “He looks like he came out of the 1930s, and he walks right in and wins over the workers by his revolutionary optimism and his sagacity in the labor union struggle,” said Goldstein.

Nineteen members of Local 8751’s Team Solidarity came to the memorial to honor Milt and express gratitude for his crucial support. “His advice was flawless,” Local 8751 President Andre Francois said. “His spirt lives on, his teaching stays with us.”

Stevan Kirschbaum, founding member and vice president of Local 8751, noted Milt’s philosophy that “Marxism is as Marxism does” and pledged to pick up Milt’s picket sign and fight to liberate the workers and oppressed from this rotten, deadly capitalism system. “Milt Neidenberg. Live like him, dare to struggle, dare to win!” Kirschbaum declared.

Most recently, Milt conceived of and initiated the formation of the Labor Fraction in the ­Party following the bus drivers’ victory over Veolia/Transdev. Martha Grevatt read a statement from the ­fraction:

Others spoke of the impact Milt had on their lives. Bob McCubbin was a college student when he met Milt’s life partner, Rosemary Neidenberg, when they were co-workers in Buffalo. Rosemary invited him to dinner, where he met Milt. They took him to political events, including a picket against a car dealership in Buffalo that refused to hire Black workers. “I had finally walked the walk on racism where previously I’d only talked the talk,” McCubbin said.

Deirdre Griswold, a Party founder, longtime editor of Workers World newpaper and member of the Secretariat, said she was 14 when Milt came to Buffalo and got three pals from Brooklyn to join him. She said it was a pretty dreary place then as the Korean war was going on, McCarthyism was raging and many Reds were losing their jobs. “Milt and his buddies lifted everyone’s spirits. They were comrades in the truest sense, encouraging, not critical or competitive.”

She continued: “Their Jewish culture was proletarian. It was rooted in surviving oppression through solidarity and kindness and humor. It was just the opposite of reactionary, bourgeois Zionist culture which uses the Nazi oppression of Jews an an excuse to oppress Palestinian people and steal their land.”

John Catalinotto, a managing editor of WW, said Milt had set the bar high for older comrades who hoped to one day be able to retire. He quoted a poem German communist Bertolt Brecht wrote about revolutionaries with Lenin in mind: “Those who are stronger fight on for an hour. Those who are still stronger might fight on for many years. The strongest fight their whole lives. They are the indispensable ones.” With a break in his voice, Catalinotto said, “Milt was indispensable.”

Young members of the party read statements of tribute to Milt sent from branches in Atlanta, Buffalo, Chicago, Los Angeles, Portland, Ore., Rochester, N.Y., the San Franciso Bay Area, Texas, Tucson, Ariz., and West Virginia. A young comrade in Philadelphia sent a video message in which he encouraged people to listen to Milt’s series of classes on labor history on YouTube.

Highlights of the memorial were the musical performances. Pam Parker moved the audience singing “Mother’s Day” and “Bound for Freedom.” The Team Solidarity Singers sang several union songs, including “Solidarity Forever” and “Joe Hill,” to joyous accompaniment from the audience.

The most moving part of the program was a video clip from a 2009 celebration of Milt and Rosemary on their 50th anniversary in Workers World Party. In this Milt says love and passion are what kept him and Rosie in the struggle. But he adds that there has to be hate as well as love — hate on a class basis “to select the best possible way to hit back, to be the most cunning, creative, crafty” against vulture capitalists that rob the workers daily.

Milt advised his comrades to learn from setbacks and advances and to go back to the classics, Marx, Lenin and Engels, because they “give us a sense of direction and historical potential for what we can accomplish on the way to a revolutionary socialist future.”