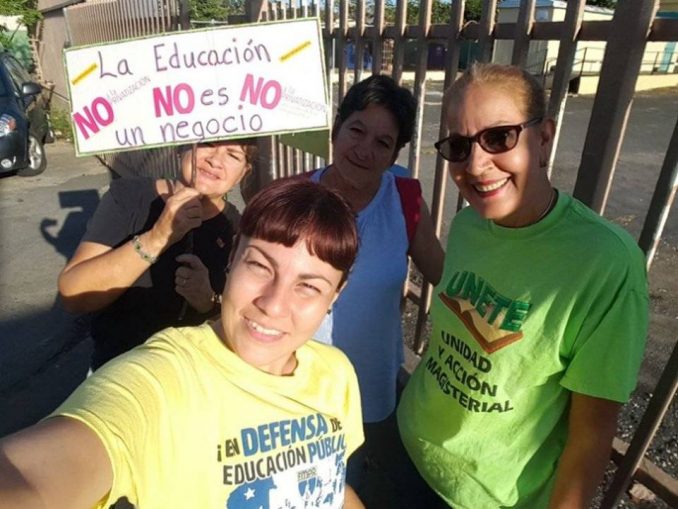 Teachers in San Juan, PR, strike to say ‘Education is not a business.’

A broad struggle against the privatization of public education in Puerto Rico began March 19 with a teachers’ strike as the Legislative Assembly tries to approve what it calls “educational reform.”

This strike has been called by the Front in Defense of Public Education, which encompasses several labor union groups. Besides teachers’ organizations, such as UNETE, Educamos, the Federation of PR Teachers and Puerto Rican Educators in Action, the Front includes the National Organization of Directors of Schools of Puerto Rico and the Organization of Directors and Administrators. Other unions such as UTIER, representing the energy sector, as well as several progressive organizations and mothers, fathers and students have joined the call.

The support of the people has been taken note of in radio and television news coverage as well as in social media.

This call to action comes at a crucial time for Puerto Rico. It is now six months since hurricanes Irma and Maria and just three months before the new hurricane season begins, yet the devastation caused by the powerful storms has not been resolved.

Thousands of people are still without electricity. There is catastrophic unemployment and major health problems, including an increase in suicides and depression. Many are still homeless and thousands of other problems persist, including extensive poisoning from toxic ash produced by burning coal. And there is the “recovery” work — ineffective and bordering on criminal — of the Federal Emergency Management Agency and the U.S. Army Corps of Engineers.

Colonialism prevents a country from developing the capacity to set up a government responsive to the interests of its people. Every four years in Puerto Rico, a legislative farce takes place in which elite rulers are elected who continue the subjugation of the people for the benefit of U.S. interests, perpetuating colonialism and dependence.

The present government is trying desperately — even comically — to force through Puerto Rico’s annexation by the U.S., the so-called Tennessee Plan. It wants to artificially transform the archipelago into what would seem to be a state of the union. Not only does the Fiscal Control Board govern in reality, but the government of Ricky Roselló hires all consulting firms, “experts” and agencies from the U.S. to impose their criteria on the Puerto Rican people.

The reality of the suffering and misery of the people is totally ignored — although it is deepening more and more every day — while million-dollar contracts are distributed right and left.

In addition, this “bankrupt” country is paying extravagant salaries to the Ukrainian who is president of the Fiscal Control Board, Natalie Jaresko ($625,000); Héctor Pesquera, head of the new “National Security” agency and formerly with the FBI ($248,000); and Julia Keleher from Philadelphia, now secretary of education ($250,000), among others.

Attacks on the Puerto Rican people have increased since the hurricane. Whether intentional or not, the blows seem aimed at destroying a people by bewildering, overwhelming and depriving them of their ability to react.

That is why the strike which started on March 19 is so important.

Privatizers see students as a ‘product’

The fight against educational reform involves not only privatization. The current pro-Yankee government also intends to eradicate a nation in order to make way for the “elaboration” of a “product” — in this case students — to serve the interests of U.S. foreign capital.

It establishes charter schools where priority is given to the teaching of science, technology, engineering and mathematics, ignoring the total training of students as human beings and not as robots. Inequality is stimulated by imposing educational vouchers, and foreign values ​​are imposed through the hiring — for $16.9 million — of a U.S. agency, the Joseph and Edna Josephson Institute of Ethics, to teach “values” to the student body.

In addition, it wants to impose an administrative restructuring of the educational system, dividing it into seven Regional Education Offices (LEAs). The intent to emulate the U.S. structure is clear in the words of the legislative project: “It is important to point out that Puerto Rico is the only jurisdiction of the American Nation that has not established the LEA model at the regional level.” (tinyurl.com/y7bw2ugl)

They have started a search to fill the posts of these administrators. Where? In the U.S., of course!

That is why the president of the Teachers Federation, Mercedes Martínez, calls this a “corporate reform.”

The day before the strike, Workers World-Mundo Obrero spoke with Eva Ayala, president of Educamos, to get her impression of the situation.

Workers World-Mundo Obrero: What is the goal of the strike?

Eva Ayala: We intend to send a strong and clear message to those who, from and through the government, want to impose an educational model based on a mercantilist vision of education.

One of its effects would be to distance the right to education from the communities by creating seven regions, each of which is to be centralized. Among other implications, they announced they will close 308 additional schools (they have already closed more than 300), which would come to more than 600 schools totally eliminated over four years.

They will also eliminate over 7,500 teaching positions. When they close schools, many jobs in school lunch services, secretaries and other personnel are also eliminated. It disrupts the functioning and culture of the communities. The purpose of the strike is to move people to put pressure so we can stop the government’s intentions.

Those big interests want to control and appropriate the public funds that have been earmarked for education. It is about the shrinkage of government in the educational area as part of the neoliberal policies they promote. They are redistributing wealth in this sector. That is why they cut expenses and increase profits through massive layoffs, mass closure of schools, elimination of rights, privatization and an increase in the cost of education. They want to use public funds to fatten the pockets of the rich who are paying for their political campaigns.

Educational vouchers represent the use of public funds to subsidize private education, which has already been declared unconstitutional. Charter schools are managed by private companies and have not proved successful in other jurisdictions in the U.S. On the contrary, they discriminate against the poor, against people with different abilities and have had a history of mismanagement of funds, fraud and corruption.

WW-MO: What changes have occurred since the new Department of Education and Roselló’s government?

EA: They, under the misleading motto that “children come first,” use the most recent catastrophes to advance their positions. They are a good example of what some call “catastrophic capitalism.” After Hurricane Maria, Keleher refused to open the schools. She wanted to take advantage of that situation to eliminate schools and deprive our people of the right to education.

They intend to leave less than 800 schools functioning, increase administrative work, force teachers to work overtime without pay (which constitutes slave labor), strengthen their punitive vision of all processes related to education, eliminate the right to retirement and they are cutting and eliminating programs such as health, libraries, vocational, physical education, fine arts and social sciences.

Apart from that, given the increase in the cost of living and the lack of materials and equipment, they are reducing the real salaries of the teachers. Secretary Keleher implements these measures because she responds to the Fiscal Control Board.

WW-MO: What do you think about the “values teaching” proposal?

EA: It is scandalous. It constitutes a fraud of great proportions. Handing out $17 million to a foreign company outside our communities — which with a few cards and workshops tries to fix in just five months the values ​​and ethics of the school population — is precisely against all ethics, values ​​and morality. They spend $17 million on that fraud while saying that closing 300 schools saves $14 million!

In Puerto Rico there are people very prepared in that area, and they were ignored. Apart from that, the secretary of education and government officials are one of the worst examples for our children and youth. Values ​​are what we teachers have, keeping education alive with our dedication and sacrifice.

WW-MO: What are the next steps?

EA: We have the strike this Monday, the 19th, then a big march called by parents of special education students on March 24. Meanwhile, we continue conducting workshops, talks, organizing people — because we are aware that a long and hard battle awaits us in defense of the public schools and the right to education. We are also promoting solidarity work with other organizations.

As an organization, EDUCAMOS will be participating in and supporting the struggles of the teachers and our schools’ communities. We believe that the right to education is concretized through the public school system throughout the country. Therefore, if we want to strengthen it, it is essential to strengthen the public schools by expanding the academic offerings, naming in time the necessary human resources, expanding and strengthening all academic programs as well as fine arts, physical education, health, vocational training, social sciences, libraries and very particularly the special education program, which is supposed to offer educational services to our students with functional diversity.