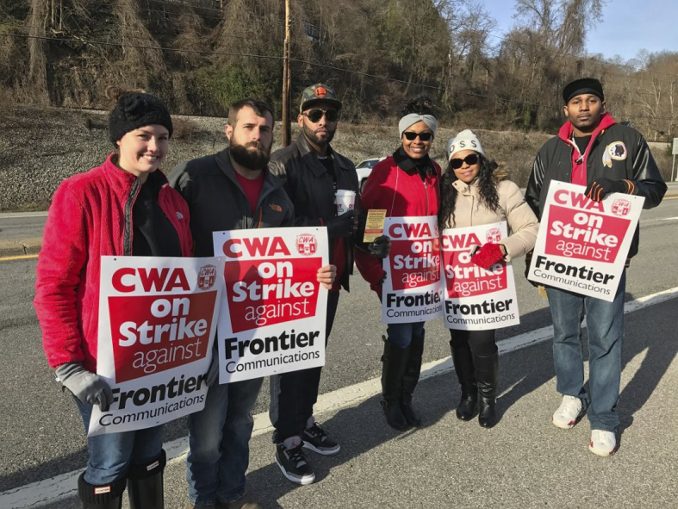 The class war is still stirring in West Virginia since the conclusion of the courageous, 9-day education workers’ strike. Some 1,400 members of Communication Workers Local 142 walked out statewide against Frontier Communications on March 4. They were joined by their sisters and brothers in Ashburn, Va.

One CWA striker told Workers World, “This fight was a long time coming, but there is no denying the school workers inspired us. We have been trying to negotiate a decent contract since August, but we have had two extensions and the company wants to lay off 200 workers.”

Picketers pointed out that when Frontier bought out Verizon in 2010, there were 2,100 positions; today there are only 1,400 employees. The strikers described automation and the contracting out to non-union work as the reason for job losses.

Frontier bosses filed for an injunction against the strike on March 15. A Kanawha County Circuit Court Judge approved a temporary restraining order limiting picket lines to six strikers on March 16. The bosses have falsely charged the strikers with “unlawful unrest” and “abuse.”

But it is the company that is being violently abusive toward the picketers.

Frontier is contracting a scab outfit known as “Mercury Z” to despicably cross the picket lines and do installation and repair work during the strike. One scab pulled a gun on a picket line in Flatwoods.

If that is not shameful enough, the company has actually hired Securitas and Pinkerton Consulting & Investigations as armed rent-a-cops to escort the scabs. The Pinkerton agency has a bloody history of being murderous paramilitary guards used against heroic workers’ struggles since 1859.

Historically referred to as “gun thugs” and “goon squads,” Pinkerton agents were most famous for their violent behavior during the 1892 Homestead Strike. They were also used against many railroad and coal miner strikes. They have a reputation of harassment and intimidation, even infiltrating unions to disrupt and destroy organizing campaigns.

Despite the company’s use of the courts and Pinkerton thugs, the CWA strikers are standing strong in West Virginia, where the education workers’ strike also encouraged teachers to strike in Jersey City, N.J. Education employees may soon strike in Oklahoma, Kentucky and Arizona. It’s starting to look like a defiant workers’ spring!