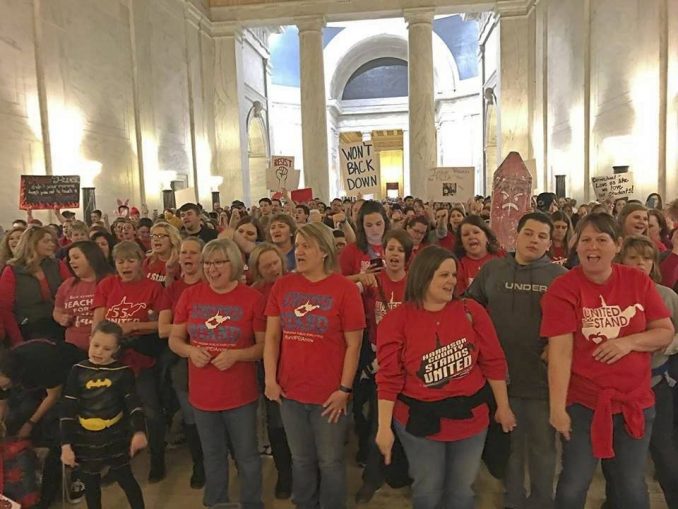 When people familiar with U.S. labor history hear about a strike in West Virginia, what is their first thought? It’s about armed miners battling mercenaries, about open class warfare, about the Matewan Massacre in 1920 and the Battle of Blair Mountain in 1921. They think about how physically courageous the miners were. They think about how the women and men in miners’ families picked up arms. They remember how important it was to build unity in struggle among African-American miners, Italian-immigrant miners and others who had been born in the region.

Only by battles to the end could unions grow and strikes win a living wage for the miners and other union workers of mountainous West Virginia.

Fast forward 97 years since the Battle of Blair Mountain. There have been ups and some very big downs for union workers in the United States, including West Virginia. That state is now the site of another historic confrontation.

It involves not just miners — whose work force has shrunk due to changes in technology like “mountaintop removal” — but education workers. Many of these teachers and other school staff, mostly women, are children and grandchildren of the miners who built the United Mine Workers union. They learned early in life that unity and militancy were needed in any strike. That only by fighting and fighting could they win.

Teachers’ pay in West Virginia is 22 percent lower than the national average. They have inadequate medical coverage — and even that is under attack. Like all teachers, they have been the target of the bosses’ lies, blamed for all the failures of an underfunded school system and the crisis of the economic system.

They have little to lose, many say. They know they need unity to win and the support of their students and communities. They have made sure to provide food for their students, a majority of whom depend on school breakfasts and lunches. When the leaders of their unions agreed to a deal they found wanting, they rejected it and have tenaciously continued the strike.

As of Monday, March 5, they have built unity among themselves. They carry placards citing the Rev. Dr. Martin Luther King Jr. They have shown the courage to confront the repressive state apparatus — headed by a right-wing billionaire governor named Jim Justice who dishes out injustice. They are facing down the oil and gas bosses and their legislative lackeys in the state’s House and Senate.

The workers are facing down anyone trying to sell them a bad contract. They are setting an example for workers around the country, who are inspired to see the West Virginia struggle unfold.

In nearby Pittsburgh, the threat of a teachers’ strike brought an immediate better offer. In West Virginia and Virginia, Communications Workers  members at Frontier Communications are beginning a strike with many of the same issues as the teachers and other education workers. Oklahoma teachers are organizing to strike.

The bosses fear that the West Virginia mood might “go viral.” Yes! Bring it on!

What those on strike need is the active solidarity of all other unions and workers around the country. Speak up and express your solidarity with and admiration for their struggle. Ask them what they need — people, funds, local actions — and come through.

The outcome of this struggle in West Virginia is vital to building the strength of workers and the labor movement throughout the country.