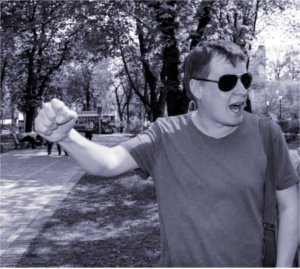 On Feb. 22-23, 2014, a violent coup overthrew Ukraine’s elected government. It brought to power the right-wing “Maidan” movement, with backing from both Democrats and Republicans in Washington.

The new regime, headed by oligarch Petro Poroshenko, has waged a brutal civil war against the people of the Donbass mining region of eastern Ukraine. People there declared independence and formed the Donetsk and Lugansk People’s Republics. The war has cost more than 10,000 lives so far, and has been exploited by U.S. and Ukrainian politicians to push a warmongering campaign against neighboring Russia.

The Ukrainian regime outlawed communist organizations, imprisoned hundreds of political opponents and unleashed armed fascist gangs throughout the country, including in Odessa, where over 40 anti-fascists were massacred on May 2, 2014. At the direction of the U.S.-dominated International Monetary Fund, Poroshenko’s government has sped up privatization and the sell-off of the country’s natural resources to Western capitalists.

Workers World spoke to Victor Shapinov, a coordinator of the outlawed Ukrainian Marxist organization Borotba (Struggle), about the situation faced by workers and the anti-fascist resistance four years after the coup.

Workers World: It’s been reported that Ukraine now has the lowest standard of living in Europe. In January, the Ukrainian Parliament, the Verkhovna Rada, passed a law aimed at accelerating the privatization of 3,000 state-owned enterprises to appease the International Monetary Fund. What does this mean for workers and youth in Ukraine? Can the labor movement respond in any meaningful way under the current regime?

Victor Shapinov: The Ukrainian working class is faced with a catastrophic decline in industry and production, comparable to the crash the country suffered after the destruction of the USSR in the 1990s. The main reason is the violent rupture of economic cooperation with Russia and other former Soviet countries, which the new government made after the victory of the Maidan for exclusively political reasons.

Today, the authorities declare a course toward building an “agrarian superpower,” actually agreeing to the loss of Ukraine’s industrial status. In turn, the decline in production and the economy as a whole leads to the fact that the youngest and most active part of the population is looking for work abroad — mainly in the European Union and Russia. In a sense, the “Euro-integration” which was discussed in the Maidan took place. But this integration is not of Ukraine, but rather of Ukrainians as cheap labor in Poland, Hungary and the Czech Republic.

Of course, all this, along with the defeat of the left and progressive forces during the Maidan, had a demoralizing effect on the labor movement. The regime and the media try to present any social protest as inspired by Russia and Putin, so the activity of workers and other strata of the people is low.

WW: Recently, the head of the IMF, Christine Lagarde, criticized the government of President Petro Poroshenko for backsliding from so-called “corruption reform.” How do you assess the relationship between the junta and the IMF today?

VS: The issue of corruption is used by international capitalist institutions to control the Ukrainian ruling class. The IMF’s demand is to create an independent system to investigate government corruption and an anti-corruption court independent of the Ukrainian authorities. At the same time, these bodies should be controlled by Ukraine’s international creditors. In fact, it is a question of creating elements of a colonial administration that would look after the local oligarchy.

Naturally, Poroshenko is not enthusiastic about such control, but this is a logical step along the path that Maidan started. Once again, it’s not about public control over corruption, but about control by international creditors — something like what we saw in Greece.

WW: From here it seems there has been a steep escalation in confrontations between the neo-Nazi groups and the Poroshenko government, especially on the streets of the capital. We know that a presidential election is scheduled for March 2019. How do you think this situation may develop over the coming year? What candidate or grouping has the support of the Western backers of the coup?

VS: So far, regardless of the pressure exerted by the West on Poroshenko, he remains the main contender, the favorite of the U.S. and EU. However, other politicians of the Maidan camp are also being considered as an alternative — Wladimir Klitschko, Yulia Tymoshenko and even the rock star Slava Vakarchuk. However, all these candidates are united by a clear nationalistic and pro-Western orientation. In their public statements, they all support the war in the Donbass and the course of so-called “European integration,” that is, the further destruction of the country under the control of Western imperialism.

As for the neo-Nazi formations, they are still used as a tool by oligarchic groups and are not an independent force capable of coming to power. However, they are increasingly challenging the state’s “monopoly on the use of violence.” They are similar to the Latin American death squads that served the reactionary state, organized crime and imperialism.

WW: Repression and political arrests continue to be widespread, such as recent arrests of people in Odessa for making social media posts critical of the regime. How do you view the situation of the anti-fascist resistance inside Ukraine and in exile? What kind of work is being done?

VS: Unfortunately, we can’t say that the anti-fascist resistance movement has recovered after the defeat in 2014. Right-wing radicals still control the streets, working together with the police and secret services, helping to suppress dissent. The resistance was forced to turn to underground methods of work — from forming illegal organizations to guerrilla attacks. However, these forms of resistance are not widespread. The majority is still demoralized and prefers to remain silent.

WW: The junta’s war against the Donbass republics has been in a holding pattern. Ukraine regularly violates the terms of the Minsk ceasefire agreements and causes casualties among civilians, but so far it has not undertaken a major offensive. However, it is said that a lot of work has been done with the help of NATO forces to train and rearm the Ukrainian Armed Forces and volunteer battalions. How do you see the standoff in the coming period?

VS: Negotiations are now underway between Ukraine, Russia, Germany and France on the deployment of a United Nations peacekeeping contingent in the conflict zone. Under the preliminary agreement, these will be peacekeepers from Brazil, Sweden and Belarus. If this is done, then the number of periodic outbreaks of fighting may decrease. However, we have already seen in the case of Yugoslavia that peacekeepers can be used as a screen for the actions of one of the parties, so the bellicose statements of Kiev cannot be dismissed.

WW: The previous U.S. administration tried to keep some distance from the worst excesses of the junta and the fascists by legally forbidding the direct sale of heavy weaponry to Ukraine. Now, under Trump, those restrictions have been removed. How do you think the shift in the U.S. imperialist government has affected the situation, if at all?

VS: Yes, the Trump administration is clearly leading the way in aggravating the international situation. Sadly, Russian officials associated Trump’s arrival with the hope for better relations and detente. Experience shows that the right wing always leads to war.

Whether Ukraine will be used as an instrument of aggression depends on many factors. It’s important to note that the ruling elites of Ukraine are much more belligerent than the most right-wing “hawks” in the White House. They offer themselves as cannon fodder to Washington, constantly declaring that they are waging a “war with Russia.”

WW: Recently there was a meeting in Dubai between U.S. State Department envoy Kurt Volker and Russian presidential advisor Vladislav Surkov to discuss the situation in Ukraine. Surkov said there was general agreement between the two sides. Do you foresee any shift in Moscow’s stance toward the Donbass after the upcoming Russian presidential elections?

VS: Russia’s ruling circles are looking for ways toward a rapprochement with the West, especially the United States. They did not expect such strong pressure and are now ready to alter their positions. However, they are not ready to capitulate completely. The ambiguity of this situation gives rise to constant attempts to agree with the West, then, on the contrary, issuing some sharp anti-Western statements. Unfortunately, the initiative here is on the side of the West — the Russian regime is only reacting.

WW: What is your message to communists and anti-fascists, especially in the Western countries?

VS: The Western media prefer to “forget” about Ukraine — they say and write little about both the civil war, which continues, and the destruction of the economy and lives of ordinary people, according to the recipes of the IMF and other international institutions.

It’s important to understand that Ukraine is a testing ground for imperialism’s war against the people. Here, the popular forces were clearly defeated, which undoubtedly will inspire imperialism to new attacks. The defeat of the revolution in Spain in 1939 was a direct prologue to the great leap of reactionary fascist forces throughout Europe. We cannot allow the example of Ukrainian fascism to spread further.