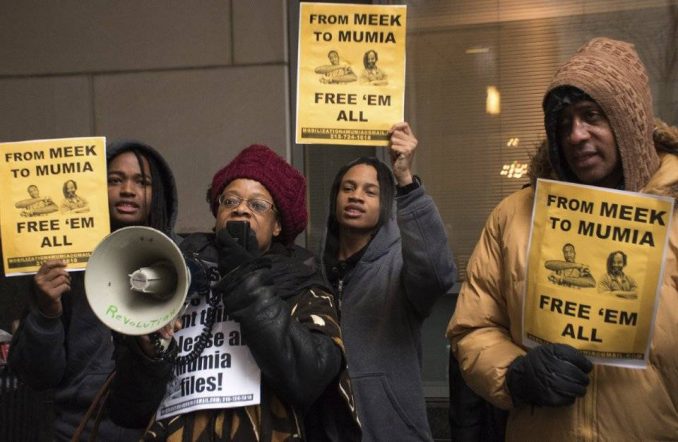 The frame-up of rapper Meek Mill by Philadelphia cops bears a telling resemblance to the case of Mumia Abu-Jamal. Both stand as indictments of the entire injustice system.

Recent revelations about the fraudulent arrest and imprisonment of Mill demonstrate what police and prison abolitionists have known for decades: The entire institution of mass incarceration is a crooked, racist system.

Two ex-cops have come forward to accuse former colleagues of giving false testimony and fabricating evidence in order to lock up Mill on gun and drug offenses in 2008. Retired cop Jerold Gibson testified that the arresting officer, Reggie Graham, lied under oath during Mill’s trial.

After securing a search warrant for Mill’s Southwest Philadelphia residence under false pretenses, Graham confronted Mill and claimed that the musician pointed a gun at him during the course of his arrest. Graham was the prosecution’s sole witness, and Mill was convicted and sentenced on his evidence alone.

The Feb. 13 Philadelphia Inquirer reports that Reggie Graham is one of 26 police officers named in a “secret list” of corrupt cops maintained by the office of the district attorney. The second ex-cop, Jeffrey Walker, accused Graham of stealing money during drug busts. Graham retired two years ago.

Like so many Black youth, Mill still in prison

Yet Mill remains in prison after a purported violation of his ridiculous 10-year probation.

The wildly unjust treatment of Meek Mill is just one of thousands of cases that enable the state to keep youths of color in bondage and forced labor. After being convicted on phony charges, they are then released to live under years of probation, which makes them extremely vulnerable to rearrest and further sentencing.

District Attorney Larry Krasner has requested three months to investigate the more than two dozen crooked cops. Meanwhile, public defenders in the city are furious that they do not have access to this “secret list” of implicated officers and detectives, which could potentially affect dozens, if not hundreds, of cases.

While a campaign to “Free Meek” has been boosted by many of his followers and fellow musicians, including Jay-Z and Sean Combs, it is perhaps less understood how strikingly Meek’s case parallels that of the legendary Philadelphia Black Liberation figure, Mumia Abu-Jamal. Abu-Jamal has been held captive by the injustice system for nearly four decades, after being framed for the murder of a cop in 1981.

Abu-Jamal was shot, gravely wounded and then severely assaulted during his arrest. Meek Mill, testified Walker, was not only beaten during his arrest but swore under oath that Graham bragged about arresting “that rapper boy” and “whoop[ing] his ass.” The court stenographer assigned to Mumia’s 1982 trial later gave a sworn affidavit that Judge Albert Sabo bragged in his chambers, “Yeah, I’m gonna help them fry the n——r.”

Even if Krasner attempts to intervene on Mill’s behalf, his request for a retrial will still be determined by Judge Genece Brinkley — the same judge who sentenced him in 2008 and revoked his parole in November 2017. Similarly, Abu-Jamal’s repeated requests for appeal and retrial were denied by Pennsylvania Supreme Court Justice Ron Castille, the same former district attorney who denied his appeals and signed his death warrant.

Tentacles of capitalist state: cops, DA, courts and parole board

The cops, the district attorney’s office, the courts and the parole boards each play their role in the injustice system. One sitting member of the Philadelphia parole board, who is also a member of the Fraternal Order of Police, continues to block any hearings that could grant parole to the MOVE 9, innocent yet still imprisoned for nearly 40 years.

DNA evidence recently exonerated Anthony Wright, falsely convicted for rape and murder in 1993. Now Andrew Swainson and Willie Veasy, both currently incarcerated in Pennsylvania, are demanding retrial, since the same crooked detectives who framed them were responsible for Wright’s arrest and conviction. A civil suit won by Wright has led to the release of over 10,000 pages of police documents that could invalidate Swainson and Veasy’s convictions.

Also named in the suit were 11 other detectives who are accused of beating confessions out of suspects and imprisoning witnesses for days to pressure them to make false statements. Prosecutors withheld crucial evidence from clients’ defense attorneys, and cops were called to give false testimony. This is a systematic, institutionalized frame-up system; Meek Mill and Mumia Abu-Jamal are just two of its victims.

Meanwhile Krasner, who came into office this January, has made some encouraging gestures. This week his office dropped more than 50 marijuana-related cases after a noticeable spike in arrests. It is unclear if these cases are related to the “secret list” of corrupt police officers.

While the possession of small amounts of marijuana is only a citation-level offense in Philadelphia, many people of color are still arrested and charged with misdemeanors. Krasner has also announced his intention to prevent the deportation of immigrants who are charged with nonviolent crimes.

Mumia Abu-Jamal is a proud representative of the thousands unjustly imprisoned across the country. He is currently one of 16 Pennsylvania prisoners who are appealing convictions overseen by Ronald Castille when he was both a Philadelphia DA and later a Pennsylvania Supreme Court judge. Upcoming court dates at Philadelphia’s Criminal Justice Center include a status report Feb. 26 and a hearing March 27.

Supporters of Meek Mill are urged to join Mumia’s supporters in this larger struggle. Meek Mill’s case and the many ways the system fails Black youth will also be the focus of a town hall meeting entitled “Young Black America: A Philadelphia Story” on March 3 at Audenried Charter School.

When we say, “Free Meek and free Mumia!” we also say, “Free them all!”