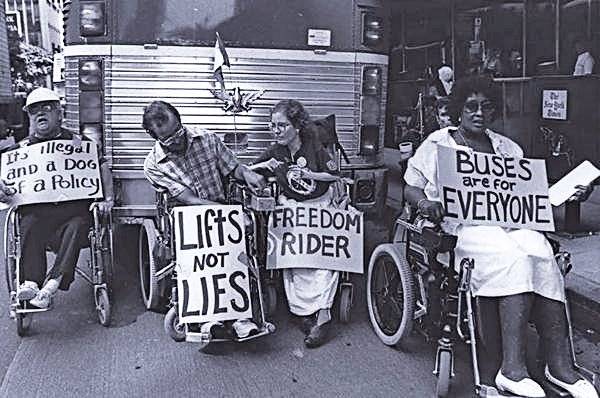 Disability rights movement protest calling for the Rehabilitation Act of 1973.

The House of Representatives voted 225-192 on Feb. 15 to roll back civil rights legislation for people with disabilities. The representatives disregarded Rep. James Langevin, a paraplegic person in a wheelchair, who pleaded with his colleagues to defeat the bill, ADA Education and Reform Act, or H.R. 620.

Disabled people themselves, including the mobility impaired, deaf and blind organized by National ADAPT, went to the House committee hearing on Feb. 13 to protest the bill. They were arrested and later released.

The protesters came back on Feb. 15, gathered in the House gallery, and chanted, “Don’t touch the ADA,” until they were again arrested and later released. ADAPT created a List of #Shame, naming the House members who voted to undermine the Americans with Disabilities Act of 1990.

Flouting this opposition, the House voted to “reform” — that’s how the bill’s supporters put it — the ADA. The so-called reform undermines what has been called “the most successful civil rights law in history” by introducing procedures that significantly delay the processing of complaints about businesses violating disabled people’s rights.

If the amendment passes the Senate and is signed by the president, a claimant will be obligated to deliver a complaint in writing to the business owner, and then wait 60 days while the business owner develops a plan to correct the violation. At that point the complainant has to wait another 120 days for the business to implement the plan.

Under this supposed reform, complainants must wait a total of six months for a remedy. Only then can they initiate a lawsuit if the owner still does not comply.

At present, without this amendment, the complainant simply downloads a form off the internet and files it with the Justice Department. The business is compelled to fix the violation — because it is the law — or face a lawsuit.

People who are mobility impaired frequently file such complaints to provide access to public accommodations. Complaints are also used to correct other situations faced by the disabled. For example, a group of deaf people sued Netflix because the captions on their films were poorly done. Following this suit, Netflix corrected the situation.

The House went to great lengths to prevent coverage of the demonstration by people with disabilities. The camera phones of protesters were collected as they entered the room. This prevented them from documenting their actions themselves.

Film footage shown on the Rachel Maddow TV show clearly portrays the House of Representatives in disarray, with members walking aimlessly around the floor looking up at the gallery. But the camera never pans up to show what the House members are looking at. You know it’s the demonstrators because you can hear them chanting, “Don’t touch the ADA.” Then the audio is turned off. Silence.

The fight against this bill continues. The bill next goes to the Senate to be put on its calendar and scheduled for a vote. It faces strong opposition from Congress members like Civil Rights icon Rep. John Lewis and Sen. Tammy Duckworth, a former helicopter pilot who lost both legs in a helicopter crash in Iraq. Both spoke passionately against the amendment after the House vote.

There will also be further protests by those most directly affected, that is, disabled people themselves.