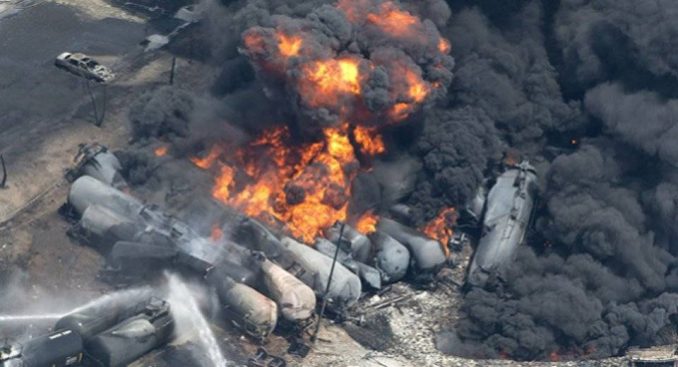 Forty-seven people were killed when a runaway train with 72 oil tank cars crashed in Lac-Mégantic, Quebec, Canada, on July 6, 2013. The resulting fires and six explosions leveled the small city’s downtown area. Several other victims’ bodies were never found; it’s thought they were vaporized by the extreme heat.

A jury in Sherbrooke, Quebec, found three railroad employees not guilty of criminal negligence on Jan. 19. They were engineer Tom Harding and rail traffic controller (train dispatcher) Richard Labrie, members of the United Steelworkers, and Jean Demaitre, a management employee.

“Everybody I talked to said they were scapegoats,” said former Lac-Mégantic resident Jean-Guy Rancour. (Montreal Gazette, Jan. 20) So who are the real culprits?

Engineer Harding was the only person handling the train. The railroad’s cheapskate CEO Ed Burkhardt had eliminated conductors on his Montreal, Maine and Atlantic Railway. So besides operating a locomotive, Harding had to ensure that a sufficient number of hand brakes were applied on the 72 tank cars.

An engineer is supposed to “tie-down” a nearly mile-long train containing thousands of tons of volatile oil without any assistance.

According to the Transportation Safety Board of Canada, the lead locomotive hauling the 72 cars that ran away in Lac-Mégantic shouldn’t have been in service.

Ten days after the Lac-Mégantic tragedy, safety agency Transport Canada banned one-person train crews. This was a confession that the agency had tolerated an unsafe condition.

The U.S. Federal Railroad Administration is running into resistance from the Association of American Railroads for enacting a similar rule in the U.S. The AAR President Edward R. Hamberger declared that “the simple fact is that no data exist showing two-person crews will enhance safety.” (AAR release, Aug. 15, 2016)

Try telling that to the families in Lac-Mégantic whose loved ones were burned alive.

Oil trains have been trouble since Standard Oil founder John D. Rockefeller demanded rebates on his competitors’ shipments, targeting the Vanderbilts and other railroad moguls.

Back in 1888, the Pennsylvania Railroad’s general freight agent told the Interstate Commerce Commission that carrying oil in tank cars “is the most undesireable business we do.” The manager described a fire involving tank cars in New Brunswick, N.J., causing $800,000 in damages. That’s millions of dollars in today’s money. (“Wealth Against Commonwealth” by Henry Demarest Lloyd)

The 72 tank cars entrusted to a one-person crew came from the Bakken Formation oil fields in North Dakota and included chemicals used for fracking. This made the crude oil as volatile as gasoline.  It was virtually a bomb train that barreled into Lac-Mégantic at 65 mph.

Fracking injects dangerous chemicals into the water table. This guarantees that these chemicals mixed with crude oil will make it dangerous to transport by any method.

Promoters of the Dakota Access Pipeline have used the Lac-Mégantic tragedy to justify trespassing on Indigenous Sioux land. But pipelines leak and explode, too.

None of this bothers bigot in chief Trump, who was lavishly backed by frackers like billionaire Harold Hamm.

Oil not the only danger

A Norfolk Southern train hauling chorine and other chemicals derailed in Graniteville, S.C., on Jan. 6, 2005; the released poison gas killed 10 people. That train was operating in what railroaders call “dark territory” — track without wayside signals. Only a small switch target warned engineer Christopher Seeling too late that the track was misaligned for a factory siding. Signals save lives, but profits come first to the railroad brass.

The train that crashed in Lac-Mégantic was in “dark territory” too. Rail traffic controller Richard Labrie had no idea that a runaway train was going down a steep grade into the Quebec town. If a signal was tripped, Labrie would have given a warning that could have saved lives.

The Montreal, Maine and Atlantic Railway was originally a mainline of the Canadian Pacific that opened in 1889. This last link in that transcontinental system connected Montréal with Saint John, New Brunswick.

But like North American railroads, the Canadian Pacific sold off its less-profitable lines. They were often gobbled up by vultures like Ed Burkhardt who run them into the ground. By the time of the Lac-Mégantic disaster, stretches of the Montreal, Maine and Atlantic Railway were limited to 25 mph or slower.

Why isn’t Burkhardt in jail?

Burkhardt is an ex-Chicago & North Western railroad executive who picked up most of the Soo Line’s tracks in Wisconsin and Upper Michigan in 1987 and renamed it the Wisconsin Central. Workers were fired and the railroad was run as a non-union outfit until railroaders voted for union representation in 1997. (joc.com, July 21, 1997)

Lac-Mégantic isn’t the only town where Burkhardt brought disaster. A one-crew Wisconsin Central 34-car train derailed in Weyauwega, Wis., on March 4, 1996. The railroad track was found to have numerous defects. Fourteen of the cars were filled with propane or liquefied petroleum. The resulting fire burned for two weeks and forced 1,700 residents to flee. Fortunately, no one was killed. (Reuters, July 21, 2013)

This rotten safety record didn’t stop Burkhardt from taking over railroads in Tasmania and New Zealand, the British rail freight system and the former Canadian Pacific line in Quebec and Maine. Neither did it stop the industry organ “Railway Age” from naming this union-buster one of its 1999 “Railroaders of the Year.”

But Ed Burkhardt is chump change compared to Warren Buffett, the third richest person on earth, whose fortune is estimated at $78 billion, says Forbes magazine. Buffett controls the 32,000-mile-long BNSF Railway Company. The billionaire bragged in his 2016 Berkshire Hathaway annual report that railroad employment has dropped 86 percent in the U.S. since 1947. More than a million jobs were destroyed.

Working and poor people need to take over the railroads from all the Burkhardts and Buffetts.

Millies is a retired Amtrak block operator and train dispatcher and a member of the Transportation Communications International Union and the American Train Dispatchers Association.