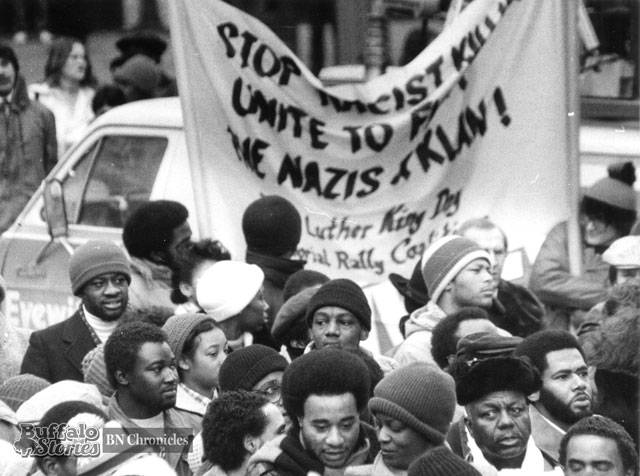 A national demonstration against racism and Ku Klux Klan terror was held in front of Buffalo City Hall on Jan. 15, 1981. For months the African-American community had been terrorized by racist killings. Six African-American men were murdered and several more attacked. Two of the men had their hearts cut out of their bodies.

On Dec. 4, 1980, the Nazi party of western New York announced that it planned to hold a rally on City Hall steps on Martin Luther King’s birthday, Jan. 15. They called for 100 white men with guts.

Almost immediately, anti-racist forces began to mobilize. A press conference by anti-racist organizations on Dec. 18 called for a massive, visible and vocal protest at the same location. Endorsers included Buffalo Against Racism, Peoples Commission Against Racist Violence in Buffalo, National Black Human Rights Coalition, Workers World Party and many others. A press release issued a week later listed a broad range of local and national endorsers.

For three weeks the city administration, led by arch-racist Mayor James Griffin, said nothing. Faced with the potential of a united anti-racist action, the mayor banned both rallies.

Progressive organizers saw through the mayor’s ploy as being directed against anti-racists. No one was surprised by this. Griffin had been elected in 1977, defeating progressive African-American State Assemblyman Arthur O. Eve. Griffin had been endorsed by the Ku Klux Klan, an endorsement that he never repudiated.

Just as fascists now are emboldened by the Donald Trump presidency, fascists at that time were emboldened in Buffalo by the Griffin administration and nationally by the recent electoral victory of Ronald Reagan, who as president would soon begin an all-out attack on workers.

Faced with strong anti-racist organizing, the local media viciously violence-baited and red-baited the anti-racist action, and counterprotesters were threatened with arrest. When it became clear that organizers were not deterred, the city organized a rally at a separate location several blocks away, billed as a rally to “honor Dr. King.” This was the first and last time the city has sponsored such an event.

Anti-racist organizers would not be deterred from opposing the Nazis head-on. They were more determined than ever to drive them out of Buffalo. When it became clear that anti-Nazi organizers wouldn’t back down, the city blinked and lifted the ban, but the violence-baiting and red-baiting continued until the last moment.

On Jan. 15, 2,000 local and out-of-town demonstrators confronted three Nazis, who were protected by a wall of police. Participants came from cities across the Northeast and East Coast. Organizers also came from around the country, some staying for a month to help. Some 60,000 leaflets were distributed in harsh winter weather.

While it was clear that some 2,000 people attended at the rally, as reported especially by the international press, the Buffalo News changed its count from 2,000 in the day’s first edition to only 400 in the final edition.

Progressives and revolutionaries — and our class enemies — have never forgotten this historic anti-racist victory. In the years since then, the Nazis several times have tried to rear their ugly heads, only to be vehemently beaten down.