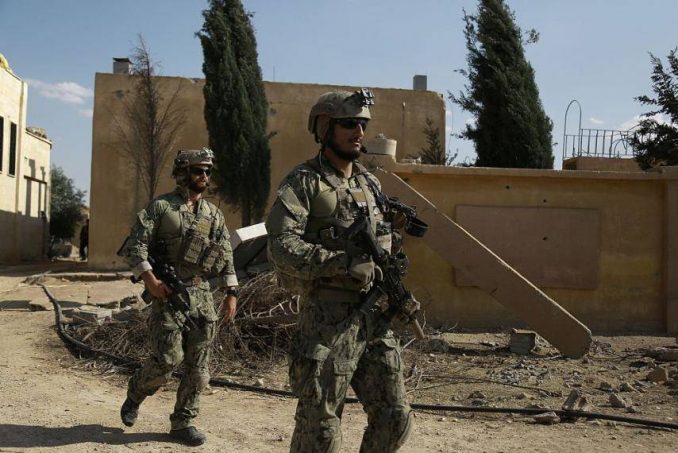 U.S. imperialism’s deteriorating position in the Middle East was confirmed on Jan. 16 by Secretary of State Rex Tillerson’s bold assertion for U.S. plans in Syria. The arrogant statement was followed, within hours, by almost immediate backpedaling.

Tillerson’s talk at the Hoover Institution at Stanford University confirmed that the only hope of maintaining U.S. domination is another desperate attempt to close all borders and dismember the entire region. But the latest plan has also created a rupture in NATO, the oldest and largest U.S.-commanded military alliance.

As the war in Syria stretches into the seventh year, Tillerson grandly announced the U.S. military will remain in Syria indefinitely. The newest U.S. plan is to create and train a military border force of 30,000 soldiers. The secretary of state also arrogantly restated the U.S. demand that has met with failure for seven years: the ouster of Syrian President Bashar al-Assad and the overthrow of the Syrian Arab Republic government.

This was not the first mention of new U.S. plans there. General Joseph Votel, commander of U.S. Central Command, said on Dec. 24 that a training program was being established for Kurdish and Arab fighters to become a permanent U.S. occupying force in Syria. Votel declared, “What we don’t want to do is leave a mess.” (us.pressfrom.com, Dec. 24)

In fact, U.S. long-term plans are to permanently divide Syria and Iraq and expand their imperialist “mess” into Iran.

Since Jan. 14, news reports around the world reported U.S. plans to create a new “border force” in Syria on the borders of Turkey and Iraq. This U.S. plan would separate the oil-rich northern region from the rest of Syria, create a mini-state and close the borders.

Washington said it would help Syrian Democratic Forces, an alliance of militias in northern and eastern Syria led by Kurdish YPG militias, to set up a new 30,000-strong border force.

A flurry of other U.S. statements drew out this plan more explicitly.

The coalition’s Public Affairs Office said: “The base of the new force is essentially a realignment of approximately 15,000 members of the SDF to a new mission in the Border Security Force as their actions against ISIS [the Islamic State group, IS] draw to a close.” (Reuters, Jan. 14)

Before the announcement of a new U.S. plan to occupy and divide the region, numerous commentators described an unprecedented development with the defeat of IS – open borders among Iran, Iraq, Syria, Lebanon and Turkey. The whole region has been divided since the 1991 U.S. war to recolonize and divide Iraq.

Turkey immediately slammed this new plan of a permanent U.S. occupation through an alliance with YPG Kurdish forces in Syria. Turkey warned of military action against the U.S.-armed and -protected YPG forces.

In the face of Turkey’s fierce opposition, Tillerson claimed, “That entire situation has been misportrayed, misdescribed, some people misspoke. We are not creating a border security force at all.” (aljazeera, Jan. 18)

Turkey’s great fear is that a “border force” of U.S.-armed Kurdish militias will siphon off advanced U.S.-supplied weapons, including anti-aircraft missiles, to Kurdistan Workers’ Party (PKK) forces in Turkey.

Although there are 1.5 to 2 million Kurds in Syria, there are almost 20 million nationally oppressed Kurds in Turkey. Making up 20 percent of population, they are the majority population in southern Turkey, bordering northern Syria, Iraq and Iran.

For decades the Pentagon has armed Turkey and aided in the brutal repression of the Kurds, who resisted under the leadership of the PKK.

But imperialism sees an opportunity to use the smaller Kurdish population in Syria, where they are 5 percent to 8 percent of the Syrian population, as a way to divide Syria. The Kurds in Syria are under the leadership of the Democratic Union Party (PYD); their armed units are the YPG. These are the main units of the U.S.-armed Syrian Democratic Forces.

U.S. imperialism used a similar scenario to impose a division on Iraq. This is imperialism’s divide-and-rule strategy for the entire region. Using the Kurds’ national aspirations for a temporary U.S. military or political advantage, and then cynically dropping them, dates back to Henry Kissinger.

The Kurds are a historically oppressed nation with a distinct language and culture, numbering over 30 million people. They are the largest nation without a state. They live in the underdeveloped, mountainous region spanning four countries: southern Turkey and northern Iraq, Iran and Syria.

Some 72 Turkish jets bombed U.S.-backed Kurdish militias in Syria on Jan. 21. The Turkish news agency Anadolu reported that jets bombed more than 100 targets, including an air base, in the first day of air operations against YPG militias. The operation targeted YPG barracks, shelters, positions, weapons, vehicles and equipment.

Each U.S. maneuver has created greater destruction, but the U.S. has been unable to consolidate its position in the region or gain stable allies.

Since 2011 the U.S. has covertly armed a whole series of conflicting militias and mercenaries.

With a wink and a nod from U.S. forces in the region, which were arming numerous extremist militias, Saudi Arabia and Turkey armed the fanatical IS army. This became an excuse for open U.S. bombing of Syrian infrastructure.

The U.S. military command pulled 19 other NATO and Gulf countries into the war in Syria. This military onslaught was totally uninvited by the Syrian government.

The Syrian government appealed to Iran, Russia and Hezbollah forces in Lebanon to aid them in defeating IS and the Pentagon-funded militias and mercenaries. This forced Washington to change tactics, but not its objective — the recolonization of the region.

U.S.-imposed sanctions against Iraq and then Syria were an effort to destroy all forms of normal economic exchange and to shut down all commercial and social life. The U.S. occupation of Iraq divided the country into walled-off mini-states with checkpoints and inspections. All borders were closed. U.S. intervention in Syria was designed to do the same thing.

U.S. wars in the region have displaced more than 10 million people and decimated the region. They have created animosity and suspicion on every side, divided the corrupt and brutal feudal Gulf state regime aligned with imperialism, and are now dividing the oldest U.S. military alliance — NATO.

But after seven years of war and 15 years of sanctions, U.S. imperialism has still not succeeded in destroying the sovereign government of the Syrian Arab Republic.