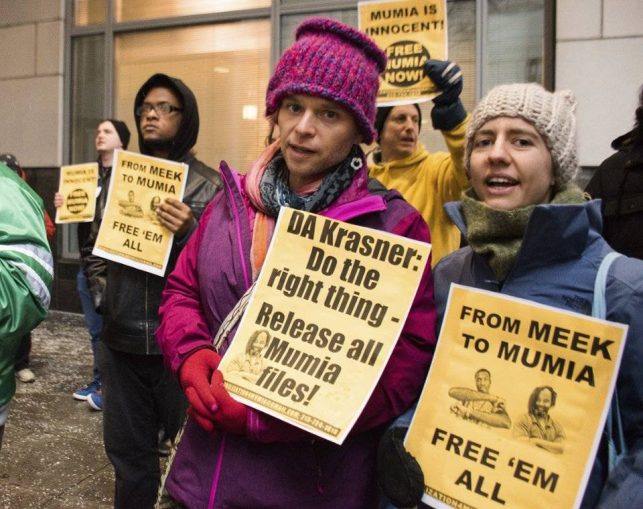 Supporters rally for justice and a new trial for Mumia Abu-Jamal outside the Philadelphia courthouse.

On Jan. 17, Philadelphia’s Criminal Justice Center was packed with scores of activists and friends of Mumia Abu-Jamal. Both outside and inside the courthouse, people from as far away as France gathered to back up the world-renowned political prisoner’s current legal challenge, which could ultimately win his freedom.

Common Pleas Court Judge Leon Tucker had ordered the district attorney’s office to produce testimony regarding a missing memorandum written by former Philadelphia DA Ron Castille. The document could help prove that Castille unconstitutionally played a decisive role when he denied Abu-Jamal’s appeals, both as DA and later as a judge on the Pennsylvania Supreme Court.

At the hearing, Abu-Jamal was represented by Sam Spital and Judith Ritter of the NAACP Legal Defense Fund. Tracey Cavanaugh, interim supervisor of the PCRA [Post-Conviction Relief Act] Unit, and Nancy Winkelman, interim supervisor of the Law Department, representing the DA’s office, asked Judge Tucker for a postponement to allow the new DA, Larry Krasner, and his staff to develop a consistent approach to all Williams v. Pennsylvania-related cases.

In 2016, the U.S. Supreme Court, in the Williams v. Pennsylvania case, found it unconstitutional that Castille was both the DA and the judge hearing Williams’ appeals. Abu-Jamal’s appeal is one of 16 related cases.

Judge Tucker scheduled a status conference for Feb. 26 and postponed Abu-Jamal’s court hearing to March 27, the next organizing date for his supporters. The jury is out on whether or not Krasner will stand firm with the people in his approach to Abu-Jamal’s internationally condemned incarceration.

After Ritter explained what had happened in court to the waiting crowd outside, participants regathered at the Arch Street Memorial Church around the corner for hot food provided by Food Not Bombs Solidarity. The meeting highlights included impromptu speeches by Estela Vazquez, executive vice president of 1199SEIU, and French activists Claude Guillaumaud-Pujol and Jacky Hortaut, of the Collectif Francais “Liberons Mumia,” and Mireille Fanon-Mendès-France from the Frantz Fanon Foundation.

The Fanon Foundation revealed how extensive Abu-Jamal’s support is around the world by collecting hundreds of signers to an open letter to DA Krasner and Pennsylvania Gov. Tom Wolf entitled: “International Call to Release the District Attorney and Police Files Relevant to Mumia Abu-Jamal’s Case and to Free Him Now.” Among the signers are Angela Davis, Danny Glover, Dr. Cornel West, Puerto Rican Nationalist hero Oscar López Rivera and Len McCluskey, general secretary of UNITE, the largest union in Great Britain.

From jailed Palestinian teenager Ahed Tamimi to imprisoned rapper Meek Mill to Abu-Jamal, the racist, capitalist, imperialist police and military apparatus exposes itself for what it really is: not an institution of the people, but a reactionary battalion that resorts to attacking and murdering children, artists and heroic activists just to cover the deep contradictions of mainstream society. The local and international solidarity around the hearing and Abu-Jamal’s case shows that the fight for Abu-Jamal’s and all political prisoners’ freedom is as strong and resonant as ever.