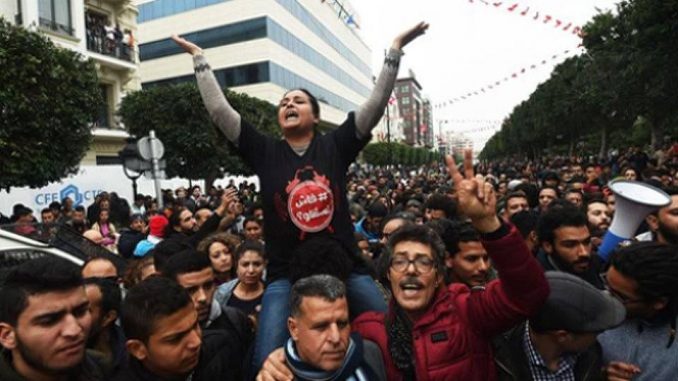 Every night and on some days since Jan. 3, thousands of Tunisians in all parts of the country have risen in resistance. They’ve attacked police stations, supermarkets, authorities — tax centers, municipalities, governorates — blocked trains and clashed with police and the military, who attacked the youths with tear gas and arrested nearly 800 people.

A new finance law pushed the people into the streets with one clear demand: We want a new budget! After a few days, protesters added a demand for jobs.

The International Monetary Fund only gives loans with draconian conditions. The most common are cutbacks of social programs and raising taxes to cut budget deficits — in other words, harsh austerity. The Tunisian government, bowing to the terms of the IMF loan, introduced a 2018 budget on New Year’s Day that raised taxes, prices on food and other essentials in ways that hit workers and the middle class particularly hard.

Workers and those just out of school were already suffering from high inflation and high unemployment — officially 30 percent for youth with a college degree.

They rallied not only in Tunis, the capital, but in the seaside resort towns of Gabès and Nabeul and cities in the interior like Thala, Jelma, Kasserine, Sidi Bouzid (where the protest began that led to the Arab Spring) and Gafsa, a mining town on the edge of the Sahara. While the main protests have been peaceful but militant, there have been confrontations.

The major Islamic party in Tunisia, Ennahda, is part of the governing coalition and has no presence in the protests. The major Tunisian labor federation – the Tunisian General Labor Union – has been very gingerly participating in the protests, avoiding any that challenge the police.

The Party of the Left, which consists of mainly young organizers, either Marxist or Arab Nationalist, has played an important role in creating the group Fech Nestannew? (What Are We Waiting For?). This group has been coordinating protests throughout the country, according to Radio France International. (Jan. 9)

The Arab Spring, which began in Tunisia in 2010-11, got rid of Tunisian dictator Ben Ali and left a legacy of political and social freedoms. But it did little to improve the economic well-being of Tunisia’s workers and marginalized youth, who are now in motion throughout the country.