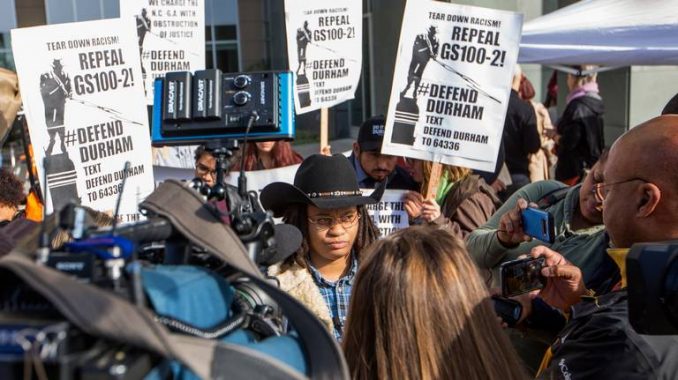 Comrades and community members in Durham will hold a People’s Tribunal on Jan. 13, putting on trial those who enforce racial injustice.

The People’s Tribunal was created in part to challenge the charges laid against eight anti-racist activists by the Durham police for tearing down a white supremacist statue in August 2017. The defendants are scheduled to be in court again on Jan. 11.

On Aug. 12, anti-fascist and anti-racist protesters militantly challenged a neo-Nazi gathering in Charlottesville, Va. After violent clashes throughout the day, anti-racist Heather Heyer was murdered by a white supremacist who drove his car into a group of protesters.

Activists in Durham toppled the Confederate statue in front of the old Durham courthouse two days later, on Aug. 14, as a righteous response to Heyer’s murder and to assert that the community would not tolerate white supremacy in any form, including the continued imposition of monuments to racism.

On Aug. 18, people came out in force to defend Durham from an announced Ku Klux Klan rally and march through the city. The KKK rally was canceled as word of the resistance spread. Two activists facing charges stemming from the counterprotest go to court in February.

Support for the anti-racist freedom fighters has swelled nationally and internationally. On the first day that many of the defendants were scheduled to turn themselves in, hundreds lined up at the Durham courthouse in solidarity, demanding that they all be arrested for fighting white supremacy. Activists from around the U.S. arrived in caravans for the first court date and rally in support of the defendants on Sept. 12, along with a Dutch television crew. Solidarity messages have poured in from around the globe.

The state has attempted to quell this outpouring of support in part by delaying and separating the trial dates for the activist defendants. Community activists have organized and held mobilizations for every court date, now monthly since September.

Seeing such blatant collusion of legal institutions with white supremacist violence, Durham organizers are taking matters into their own hands.

“The People’s Tribunal is really meant to pull together members of the Durham community, to bring charges against the sheriff, the police, the court systems and the various systems of racist oppression in the city,” said Takiyah Thompson, a Workers World party member and North Carolina Central University student who has helped organize the event.

“Fundamentally, we disagree with their laws,” said Thompson, one of the defendants. “The fact is that this bourgeois democratic society believes that the laws can only be enforced in one direction and not the other. It’s important to challenge that notion, as a gateway for more radical challenges to the state as a whole.”

Organizers hope that the People’s Tribunal will strike both an absurd and somber note. Replete with banners, a giant gavel, witnesses, experts and a judge, the event will have all the components of a mock trial, but the crimes it addresses are real.

The tribunal will welcome community members to share testimonies of their personal experiences with white supremacy in Durham, offer rebukes of its violent institutions and recommend sentences against those in power. Those who attend will collectively agree upon the verdicts.

“It’s a way for people to have a grievance process of their own and to give people an outlet to strengthen community,” Thompson said.

To help promote the tribunal and voice solidarity with the defendants, Durham activists encourage allies to participate in the #DefendDurham video challenge. Participants can share a 30-second video on social media (with the hashtag) explaining the reasons for their support and demanding that all charges be dropped.

The event has been posted on Facebook, and will be livestreamed.

Since promoting these #DefendDurham initiatives, activists have been threatened by local white supremacists. Last week, a camera recorded two hooded figures posting an anti-Semitic, anti-communist flyer on the door of the Durham Solidarity Center. The flyer displayed Nazi slogans.

This racist crime and others across Durham have only affirmed for activists the necessity for a People’s Tribunal. “I think that the experience of a lot of people, particularly people of color, poor and working-class people, is that there is not justice in the courts,” said Elena Everett, an anti-racist defendant.

“If we can’t find justice in the courts, then we need to create our own spaces to get real stories of what is going on in our communities so that we can come up with our own solutions.”