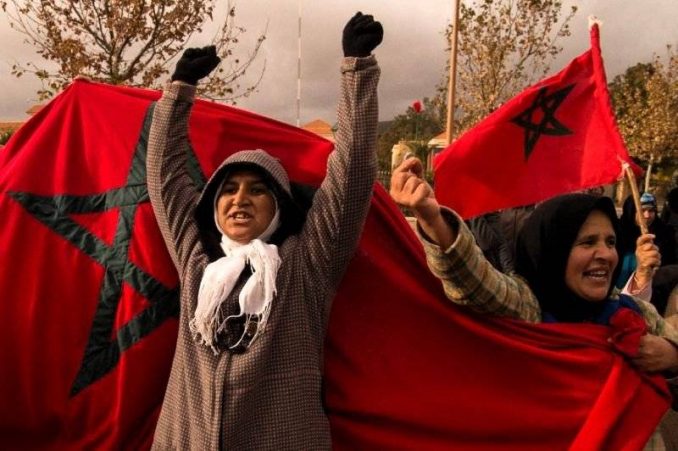 Brothers Houcine and Jedouane drowned in a clandestine, flooded, handmade mine in Jerada, Morocco, on Dec. 22. When their bodies were recovered a day later, the protests started.

Jerada was a major coal mining town until the government-owned mine closed in the 1990s, laying off 9,000 workers. Since then, scores of tiny mines have given work to hundreds who daily risk death and injury for a living. Some mines are holes scarcely big enough for a small man to use. Generally, miners make around $11 a day.

In the protests, thousands of people, many of them women and children, filled the streets, demanding “jobs, dignity and development.” These were the same demands made by the protest organization Hirak during large demonstrations in October in Al Hoceima, a coastal city in northeast Morocco.

Al Hoceima is north of Jerada and both are in the Rif region. This area has been the scene of such a major outcry that King Mohammed VI brought in thousands of cops in September to put a lid on protests that were severely challenging his regime. (Le Monde, Oct. 26)

The majority of the population of the Rif is Amazigh, often pejoratively called Berber. The Imazighen, the name the Amazigh people use for their nationality, make up about 40 percent of the people of Morocco.

Historically, the Rif has been the center of struggle against France and Spain, the colonial occupiers of Morocco, and against kings Hassan II and Mohammed VI, who took over rule after direct colonialism ended.

On Dec. 27, the Party of Authentic Modernity led thousands of people in marching on the city offices of Jerada to protest sharp increases in electric and water bills. Jerada is the poorest city in Morocco.

The four major labor unions in Morocco, joined by all the opposition political parties, then called a very successful general strike Dec. 29, which shut Jerada down, according to H24info.ma, a Moroccan internet news service. The country’s major trading partners are still Spain and France, its former colonial rulers. According to a year end report by the Office of Foreign Exchange, major exports are cars and coated wire for networks and computers.

While sectors of the Moroccan economy tied to neocolonial capitalism are developing, the people living in the poorer areas — not just in the Rif but also in the south of the country — are making their opposition to growing inequality firmly and militantly known.