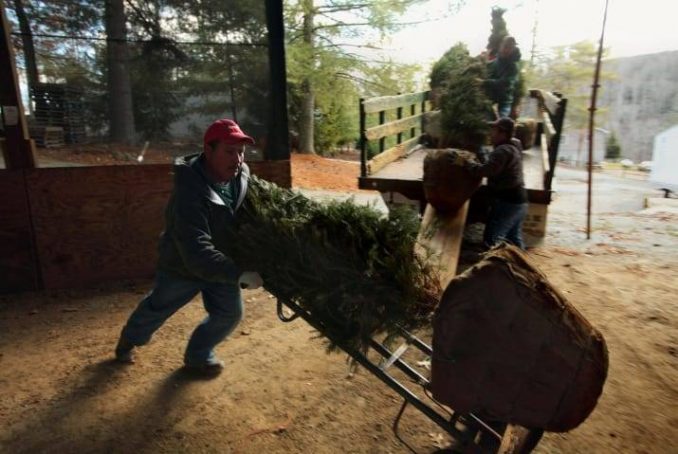 Workers at a Christmas tree farm in North Carolina.

When we light up Christmas trees, we don’t think about the workers who plant and harvest them. In North Carolina they’re Mexican migrants who face harsh working conditions and intimidation in the fields. While the 2016 Christmas tree industry generated $2.04 billion, according to the National Christmas Tree Association (Telesur, Dec. 25), none of these gains went to the workers. Instead, Scrooge bosses abused and stole from them.

During spring planting, the owners of Hart-T-Tree farm in Grassy Creek exposed workers to hazardous chemicals. Herbicides were sprayed while the men worked nearby, a violation of chemical guidelines mandating a 10-day waiting period after application. Workers became sick, suffering from headaches, dizziness, vomiting and diarrhea. During the harvest, instead of transporting workers in trucks, the bosses forced them to ride on top of a tractor bed filled with shifting trees down winding mountain roads, which led to fractured arms and bruised ribs.

But once the owners began deducting rent, electric and gas from their pay — illegal under the H-2A visa “guest worker” program — the workers contacted the Farm Labor Organizing Committee, which represents 10,000 H-2A workers in the state. FLOC discovered the bosses had shorted workers’ wages, paying them $9 an hour, when the collective bargaining agreement of the N.C. Growers Association stipulated a minimum of $11.27. With FLOC’s help, the workers filed a grievance and won; $330,000 in stolen wages was returned to 54 Hart-T-Tree workers.

“A settlement of this nature being reached and paid out in a matter of a few weeks is unheard of in agriculture,” said Justin Flores, FLOC vice president. As one worker told Payday Report, “We gotta organize; this is the hardest work out there. We’re human beings, too.” (Dec. 18)

The Communication Workers announced Dec. 21 that over 21,000 AT&T wireless retail workers have reached a precedent-setting tentative agreement. In addition to curbing outsourcing and raising pay, it provides the widest-reaching protections for transgender workers in any telecom industry contract. The agreement includes the first-ever enforceable protections against discrimination based on gender identity in 16 states with no statewide nondiscrimination law covering that category. The agreement also outlines a clear process for redressing discrimination through the union grievance and arbitration process across 36 states covered by CWA’s bargaining unit.

“This contract shines a light on the union power to drive progress,” stated Dennis G. Trainor, vice president of CWA District One. “Let this be a signal to opponents of LGBTQ equality, who are nearly always opponents of workers’ rights too: We stand strong together and will tear down all obstacles to full equality.”

CWA’s hard-fought agreement with AT&T, on which workers will vote Jan. 12, also provides 10.1 percent pay raises over the four-year contract; by its end the workers will make on average $19.20/hour. Over the last 11 months, the workers held rallies and picket lines in 36 states and Washington, D.C., dramatizing their fight with a 3-day strike in May.

A multi-million-dollar federal class-action lawsuit was filed Dec. 1 by seven plaintiffs against the city of New York alleging the Fire Department systematically discriminates against African-American workers in its civilian workforce and Emergency Medical Service. Based on a 2016 complaint to the U.S. Equal Employment Opportunity Commission charging discriminatory practices, the suit alleges that the FDNY continues to resist hiring African Americans, asserting it “remains one of the least-diverse municipal agencies not only in New York City but in the nation.” Black FDNY firefighters settled a discrimination lawsuit three years ago.

This lawsuit claims FDNY leadership hasn’t adopted practices to reduce or stop discrimination; Black workers are not promoted to decision-making jobs and are not compensated as much as other employees; and City Hall has failed to control FDNY practices. Among their demands, the plaintiffs want the court to appoint an outside monitor to audit compensation for five or more years. (Amsterdam News, Dec. 14)

With millions of women testifying to sexual harassment or assault through #MeToo, women in UNITE HERE are leading the demand for justice against gender-based harassment inside their workplaces. Housekeepers in UNITE HERE Local 23 in Chicago just won a new city ordinance called “Hands Off, Pants On” mandating a safe workplace for women working in hotel rooms. (dclabor.org, Dec. 11)