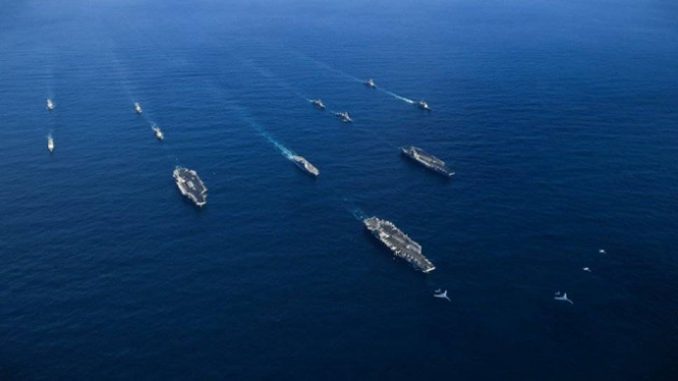 Where does the danger of yet another war come from?

Does it come from the Democratic People’s Republic of Korea, which has no military bases or soldiers or nuclear weapons anywhere in the world but on its own soil?

Or does it come from the U.S. billionaire ruling class, which dictates U.S. military and foreign policy?

The U.S. has been militarily occupying the southern half of Korea since 1945. U.S. warplanes, warships, submarines, troops and military “advisers,” armed with everything from assault rifles to nuclear weapons, are spread all over the world.

This is the question that should have been on the agenda of the U.N. Security Council on Dec. 22, when its 15 members voted for an even stiffer round of sanctions against the DPRK. These sanctions reduce the country’s ability to import refined petroleum products by 90 percent and set a cap on crude oil imports. They also mandate the return within 24 months of the estimated 100,000 DPRK citizens working abroad, whose remittances to their home country contribute to the national economy.

The DPRK foreign ministry responded to these sanctions, declaring them “an act of war.” And rightly so. Because attempts to starve and freeze an entire country can be as deadly as shooting.

The sanctions are timed to hurt the DPRK at the cruelest time of year in this far-northern country. The Korean people must be tightening their belts and figuring out how to stave off hunger and frost during the coldest winter months.

How will the sanctions affect the schools in this socialist country, which wiped out illiteracy decades ago and provide every person with a free education? How will they affect the hospitals and clinics — where 70 percent of the doctors are women — that give total medical care and regular checkups free to the entire population?

People living in the United States never hear about the DPRK’s great social achievements. They are made all the more spectacular by the fact that the U.S. military, from 1950 to 1953, dropped more bombs on north Korea than in the entire Pacific theater during World War II. People here cannot imagine what it must have been like to build up an economy focused on meeting people’s needs when every single building higher than one story had been blasted to bits by U.S. planes during the Korean War.

But the Koreans know the horrors of war. That is why they have focused on the need for self-defense ever since — to defend what they have built up literally from the ashes.

The total U.S. military budget for fiscal year 2018 is $824.6 billion, making it larger than the military budgets of the next nine countries combined. (thebalance.com) This huge budget feeds the military-industrial-banking complex and the tremendous income gap in this country.

In late October, right before Trump’s trip to China, the U.S. sent two more U.S. Navy carrier strike groups to the Pacific, making a total of three aircraft carriers and their accompanying fleets of cruisers, destroyers and submarines. There have been so many U.S. warships in the Pacific this year that a number of serious naval accidents have occurred there.

Every summer, fall, winter and spring, the U.S. holds war “games” in south Korea, practicing for the invasion of the north and the “decapitation” — the Pentagon’s own word — of its leadership. Recently, these U.S. military exercises have included thousands of soldiers from Japan, the hated colonial power that ruled all Korea from 1910 to 1945.

In early December, the U.S. launched another set of these war “games” in which six F-22 fighter jets, as well as six F-35As and 12 F-35Bs, were involved for the first time. These supersonic aircraft zooming toward the DPRK border ramped up the possibility that the Koreans might think an attack had begun.

Faced with this relentless aggression, Korean scientists have been able to construct nuclear weapons and a missile system capable of delivering them to U.S. targets if they are attacked. Given what the DPRK is up against, what country in the world could be more justified in claiming the need for this type of defense?

China and Russia, world powers that are the DPRK’s two northern neighbors, are the ones tasked by this new sanctions resolution with cutting down most of its oil shipments and sending home its nationals working in their countries.

Back on Sept. 6, the New York Times reported that the Trump administration had “circulated a draft resolution at the United Nations Security Council that would effectively empower the United States Navy and Air Force to interdict North Korean ships at sea, inspect them to determine whether they are carrying weapons material or fuel into the country, and use ‘all necessary measures’ to enforce compliance.”

People’s China and capitalist Russia are said to have agreed to the Dec. 22 U.N. vote increasing sanctions on the DPRK partly because of this U.S. threat to start boarding Korean ships on the high seas. They are justifying their vote as a means to avert an incident that could lead to war.

However, they voted for previous sanctions resolutions, and that did nothing to stop the U.S. from intensifying its war threats against the DPRK or keep it from moving even more military personnel and equipment into the area.

Will this latest resolution, instead of appeasing the imperialists, merely whet their appetite for more and more concessions at the expense of the Korean people? When will the governments of China and Russia draw the line and say, “No pasarán”? (“They shall not pass.”)

The problem is not just that an unfortunate incident could lead to war. The problem is that U.S. policy, as expressed in its pronouncements and its military exercises, is to destroy the socialist government of the DPRK and turn the northern half of Korea into a U.S. neocolony.

It should be remembered that no U.S. administration has been willing to sit down with representatives of the DPRK and negotiate an end to the state of war that has existed since 1950, despite many, many requests from the Koreans for such discussions and a peace treaty. What this means is that the Pentagon can launch an attack at any time without even the figleaf of consulting Congress — because an official state of war already exists.

Were China and Russia to have vetoed the sanctions resolution, they would certainly have risked incurring the wrath of the imperialists. But doesn’t going along with such a resolution incur even greater risk of emboldening the most aggressive forces among the imperialist policy makers, who want unchallenged domination over the world and see both China and to a lesser degree Russia as rivals?

The actions of the DPRK’s neighbors so far must have confirmed to the Koreans that to prevent the U.S. from starting another war, they must have a very powerful deterrent of their own. And isn’t that why both the USSR, when it existed, and People’s China developed their own nuclear weapons in response to and despite the threats from Washington?