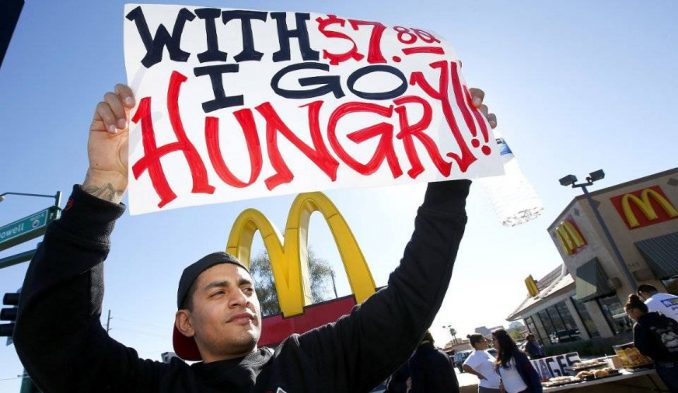 Eric Cantor, Republican House majority leader in 2012, put out a tweet to celebrate Labor Day that year. It failed to mention workers at all. Instead, it praised those who “built a business and earned their own success.” (nytimes.com, Dec. 14)

That Cantor heaped praise on the bosses while failing to cite workers in any way on the one official U.S. holiday that is supposed to recognize labor’s “contributions” reveals how politicians and their Wall Street masters hold the working class in utter contempt. But this gaffe was symbolic.

Far more damaging are the recent attacks by the Boss Trump regime on workers, particularly low-wage workers. Workers in restaurants, nail and hair salons, and other service workers, predominantly women of color, need to supplement their low pay with tips, which total some $30 billion a year in the U.S.

Trump’s Department of Labor announced a new rule on Dec. 4 that allows owners to control their workers’ tips. Supposedly, this is so owners can use the tips to pay “back-room” workers like dishwashers and cooks, predominantly immigrants and men of color, who don’t have contact with customers.

What this allows the bosses to do, however, is to pocket the servers’ hard-earned tip money or, at best, to use this money to keep regular wages low for back-room workers.

Then, Trump’s National Labor Relations Board, by a 3-2 margin on Dec. 14, rescinded the rule that made franchise owners and franchisees jointly responsible to abide by labor rules and standards, including bargaining with their workers. This ruling not only harms low-wage workers at huge franchises like McDonald’s, but it also harms 24 million low-wage workers hired by temporary staffing firms and contractors. (epi.org, Dec. 15)

Under this ruling, made without any public hearings, workers who demand higher pay from the contractor-owner can be told that the franchiser sets pay and work standard rules. At the same time, the franchiser can say that pay and benefits are up to the contractor. This ruling rigs the whole system against the workers.

Of course, these pro-business measures are designed to blunt the “$15 an hour and a union” movement. Raising the minimum wage to a living wage has struck a chord across the country. Over the last decade, even voters in the so-called most conservative states have, when given the opportunity, favored increasing the minimum wage.

In 2016 alone, despite Trump’s election (with 3 million fewer votes than his opponent), Arizona, Colorado, Maine and Washington state all voted to increase the minimum wage to at least $12 an hour. A South Dakota measure that would lower the minimum wage for workers under the age of 18 was soundly defeated. In November, Maine’s voters approved a measure to expand Medicaid to 70,000 low-wage workers in the state.

Stagnant wages since the 1970s have sparked this sense of worker solidarity. “In a notable shift from earlier decades, labor’s share of income is no longer constant, but has fallen from nearly 65 percent in the mid-1970s to below 57 percent in 2017.” (Harvard Business Review, Oct. 24) Some in the establishment may consider Trump “a loose cannon,” but Wall Street backs him to the hilt in his attempts to transfer income from labor to capital.

Rulings and maneuvers by Trump’s stooges will only increase the anger of the workers and oppressed communities as they fall further and further behind the wealthy corporate parasites.