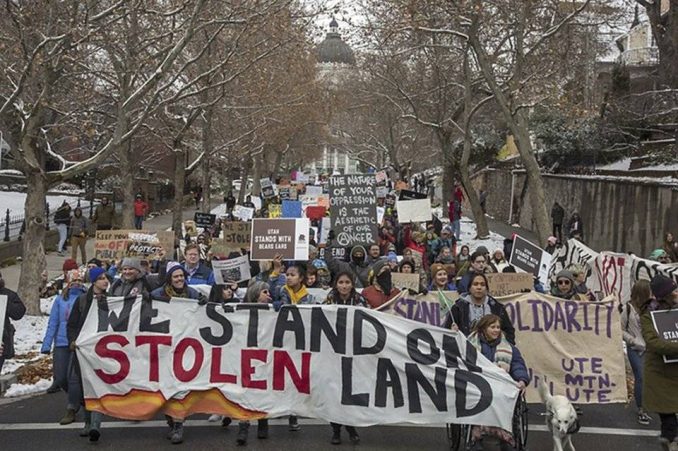 The Trump White House’s plan to steal 1 million acres from Bears Ears National Monument lays bare the history of U.S. genocide against Native nations and land theft in the interests of imperialism, energy companies and the military-industrial complex, all of which are based on that genocide.

The announced 2-million-acre reduction of Bears Ears and the Grand Staircase/Escalante monuments is the largest cut to federal land protection in U.S. history and an unprecedented planned takeover in the interests of mining and energy corporations. The staged announcement itself displayed Trump’s connections with right-wing land-use ideologues and fossil fuel and uranium corporations.

Five Native nations — the Navajo, Hopi, Zuni, Ute Mountain Ute, and Uintah and Ouray Ute nations, united as the Bears Ears Inter-Tribal Coalition — had won monument status in 2016 for 1.3 million acres of their sacred ancestral lands with unprecedented Indigenous oversight. Trump’s proclamation is meant to strip control from them over uranium, oil and gas deposits and to attack their cultural heritage. Bears Ears is densely packed with ancient cultural resources. Puebloan ruins in the area are thousands of years old.

Angelo Baca, a coordinator of Utah Diné Bikéyah and a filmmaker, said, “Bears Ears will always be Indigenous land, and nothing will change that.” (New York Times, Dec. 8)

The five nations, joined by environmental and conservationist groups, have filed five federal lawsuits against reduction of the two monuments. The lawsuits encompass challenges to Trump’s violation of the 1906 Antiquities Act and the posed threat to hundreds of historical and archeological pueblos and kivas (ruins of ancient apartment buildings and ceremonial chambers), petroglyph (rock art) panels and artifacts. Also, they raise the direct and immediate harm that would result to paleontological sites and the ecosystem.

Reduction of Grand Staircase/Escalante National Monument, which is also home to Native historical, cultural and paleontological sites, is a giveaway to coal mining interests.

Energy Fuels Resources, owners of the White Mesa Uranium Mill and the Daneros Uranium Mine, lobbied the administration to give them use of monument lands. Chief Operating Officer Mark Chalmers said there are “many other known uranium and vanadium deposits located within [Bears Ears].” (Washington Post, Dec. 8)

The Ute Mountain Ute community is directly threatened by the Daneros mine and the White Mesa mill. Energy Fuels aims to increase capacity to haul up to 500,000 tons of uranium through Cedar Mesa, a mountain just below the two buttes called Bears Ears. Both the Navajo Nation and the Ute Mountain Ute have suffered devastation from uranium waste and its refinement.

Since 2013, energy companies have asked the Bureau of Land Management (BLM) to open 100,000 acres of land within the Bears Ears area to oil and gas leasing, according to the Center for Biological Diversity, although oil has not been pumped in the area since 1992.

Uranium mining: Impact on Diné/Navajo Nation and the arms race

The history of uranium mining is one of thievery and devastation of Native lands with total disregard for its impact on the health of all who live in proximity. Uranium mining forms the basis of the infrastructure of the nuclear arms manufacturing industry. The Navajo Nation has taken the brunt of the extraction of this deadly mineral; it is poisonous and radioactive. Miners are exposed to radiation and carry it home on their clothing to their families. The winds blow the tailings from the mines across the lands and into nearby waters.

A University of New Mexico study recently found 85 percent of Diné homes are contaminated with uranium, and the mineral has even been found in their infants’ urine. Navajos living near uranium mines have higher levels of the mineral in their bones than 95 percent of the U.S. population. (Jacqueline Keeler, “Trump’s message for tribes: Let them eat yellowcake,” High Country News, Dec. 16)

After the U.S. bombed Hiroshima and Nagasaki in 1945, some 30 million tons of uranium were mined on the Navajo Nation reservation. Diné miners were hired as cheap labor and were not informed of the health risks. By the early 1960s, miners were getting sick and dying. Survivors, widows and family members in the Uranium Radiation Victims Committee began to fight the corporate abuse of their community and started a 30-year legal battle for workers compensation and damages. Navajo Nation President Peterson Zah declared a moratorium on uranium mining in December 1992.

There have been clusters of birth defects and stillbirths in Diné children in the Shiprock, N.M., uranium mining area. The National Institutes of Health reported in 1992 that more than 320 kinds of congenital conditions had been detected in Indian Health Service hospital records from Shiprock.  In these cases, the mothers lived near uranium mine dumps and tailings. Some of the fathers had worked in the mines.  NIH’s website states: “Birth defects increased significantly when either parent worked in the Shiprock electronics assembly plant.”

Uranium prices remain low for now, but Trump has talked about producing more nuclear weapons. The nuclear arms race began with the intention to make a first-strike attack against the former Soviet Union. After the fall of the USSR, partly due to the relentless economic and political impact of the arms race, nuclear weapons stocks were downsized globally. But the U.S. still has more than all other countries combined. The Pentagon surrounds the Korean peninsula with nuclear arms, and Trump has stated his intention to use them.

The nuclear energy industry exists because the military-industrial complex required it to process enough refined uranium to make thousands of nuclear weapons. Uranium ore is processed into yellowcake to use in nuclear reactors. The chain reaction generates heat in the reactors and produces fissile material required to make nuclear bombs.

The military also uses the leftover depleted uranium in armor plating and bullets. The Pentagon’s use of DU has left parts of Iraq thoroughly poisoned to the extent that women in Fallujah have been warned to avoid getting pregnant due to it resulting in horrendous birth defects.

There is a long history in the Four Corners area of the western states of theft of cultural artifacts, which are often dug up and sold to rich collectors, most often damaging ruins in the process. Ancient petroglyphs throughout the West have sometimes been drilled or hacked to pieces to remove parts for illegal sales. This is what Trump meant in announcing that the monument prevented local people “from enjoying their outdoor activities.”

Racist San Juan County Commissioner Phil Lyman, who was onstage with Trump, led a white supremacist ATV ride across 1,000-year-old Puebloan ruins in 2014 to protest the BLM closure of an illegally created road through the ancient ruins. Joining that ride was Ryan Bundy, who was part of the 2016 proto-fascist takeover of the Malheur National Wildlife Refuge. During that takeover, white supremacists plowed over Paiute ruins to create a latrine and pillaged precious preserved artifacts.

While the Bundyites at Malheur threatened the lives of Malheur BLM employees, Trump is considering Karen Budd-Falen, Bundy’s former attorney and ideologue, for nomination to head the BLM. This is analogous to Scott Pruitt’s takeover of the Environmental Protection Agency.

The unprecedented downsizing of Bears Ears and Grand Escalante monuments was overshadowed by Trump’s racist use of the ceremony honoring World War II Navajo Code Talkers.  These veterans were to be honored for their vital role in the war against the Axis powers by using their Diné language to transmit military communications.  Trump posed for the ceremony in front of portraits of the racist, genocidal President Andrew Jackson, initiator of the Trail of Tears, the enforced removals of Native nations from their lands. Trump called Sen. Elizabeth Warren “Pocahontas” before the assembled media.

Warren’s claim to Native ancestry is for the Tsalagi people to decide, but the use of Pocahontas’ name within the context of the current culture of calling out sexual abusers says volumes about Trump, who has admitted to sexual misconduct. Matoaka, nicknamed Pocahontas, a daughter of the Native leader Powhatan, was kidnapped and raped by Jamestown settlers.  She was forced to marry a tobacco planter and taken to England, where she died of pneumonia. The Disney movie about her is based on a myth that she saved John Smith. She would have been 10 or 11 years old at the time. Smith was exposed in his day as one who told many such lies about Native women.