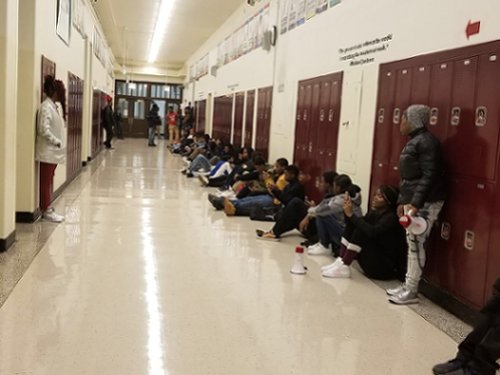 Students strike, sit down in hallways.

Students at Harper High School staged a sit-in on Dec. 1, protesting the closing of all four public high schools in the historically Black, working-class neighborhood of Englewood on Chicago’s South Side.

The schools are slated to close next June, with a replacement school not set to open until the fall of 2019. The proposed replacement school will be developed under Distinctive Schools, which has ties to Edison Learning. That for-profit charter network has received criticism from communities in San Francisco and Michigan, Delaware and Florida for mistreatment of teachers and their role in penalizing and displacing students.

In the network of Chicago charter schools, where one of the writers of this article worked, the rigid discipline, inflexible learning environment and rejection of restorative justice caused many students, both with and without disabilities, to drop out, transfer, repeat grades or be expelled — all so the school might have a more “rigorous” learning environment.

Another South Side school is also in the news. Mollison Elementary, located in Bronzeville, is experiencing an infestation of rodents. A protest at the school broke out the morning of Nov. 30 when a school security guard crushed a Local School Council representative and parent to the ground, sending her to Mercy Hospital in an ambulance.

Not only are Chicago schools infested with rats, 113 schools (out of 660 in 2014-15) tested positive for unacceptable levels of lead in the drinking fountain water!

Chicago Mayor Rahm Emanuel closed 50 public schools in 2013. These closings affected 46,000 children — the majority of them Black — and were 10 times more likely to target schools that had a majority-Black teaching staff.

As members of the Chicago Teachers Union who work in a West Side neighborhood, it is very apparent to us that Emanuel’s latest proposal — motivated by continued gentrification of Chicago’s South Side and the profits that generates — is an attack on Chicago’s Black working-class communities.

Activists have been protesting the installation of a $95 million cop training academy in Garfield Park, another historically Black, working-class neighborhood on the West Side of Chicago.

Closing public schools and opening police academies are both racist attacks on Chicago’s Black and Brown communities. Instead of working to improve the conditions in schools and fund public resources, Emmanuel and his cronies are bent on policing and privatizing the remaining services available to Chicago’s most oppressed communities.