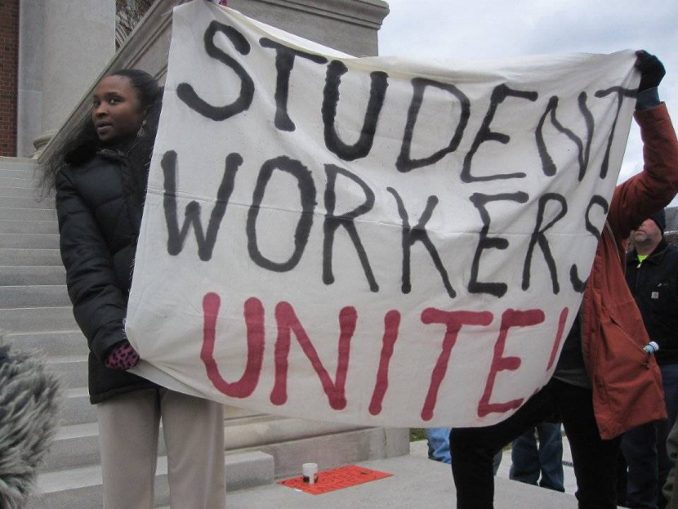 Syracuse, N.Y. — Worker outrage and organizing was the order of the day on Nov. 30, as some 150 members of Syracuse Graduate Employees United and their supporters rallied on Syracuse University’s central quad. SGEU was speaking out both for the right to a union and against the current federal tax bill that was on the verge of passing the U.S. Senate.

SGEU was making its first public announcement of a drive to unionize all graduate teaching assistants (GAs and TAs), research assistants (RAs) and fellows at SU. After the SU administration tried to take employee health insurance away from grad student workers in spring 2015, many began to meet and reach out to other student workers to build a union.

Laura Jaffee, a key SGEU organizer, has worked as a teaching assistant in the Cultural Foundations of Education Department. She told WW: “I support a union because the work TAs, GAs, and RAs do is necessary for the university to function. We deserve to be compensated for that labor with dignified working conditions in the form of comprehensive and affordable health care, decent wages, accessible childcare, adequate mental health support, and other benefits to make graduate life viable, particularly for oppressed groups largely excluded from accessing graduate education.

“A union gives us collective bargaining power,” she continued, “and enables us to democratically make decisions that improve our work lives. The power to have some say over the conditions of our work is a really basic acknowledgement of the value of the work we do.”

Jaffee emphasized that a union would help fend off future attacks on graduate workers, like the blows now threatened by the new federal tax plan. The rally was part of a national graduate student walkout to protest the tax bill, with participation in #gradtaxwalkout at more than 50 colleges and universities.

‘Build power in the workplace’

Speaker after speaker, ranging in academic departments from Physics to Journalism, from Disability Studies to Geography, gave devastating details on the impact of the tax bill’s proposed provisions. Under the current tax code, tuition benefits received by grad students are exempt from taxation. The tax plan would repeal that exemption, so a grad worker earning $5,000 yearly for teaching, who receives $36,000 in untaxed tuition benefits, would go from paying virtually no taxes to owing over $3,456 in taxes — on an actual income of $5,000. Student loan interest would also not be allowed as a tax deduction. (Daily Orange, Nov. 28)

Rally speakers stressed the tax plan would make Syracuse University even less accessible to Indigenous students on whose land the school stands, and to Black and Latinx students, especially those from the city of Syracuse proper, which has the highest rate of concentrated poverty for those populations in the U.S.

International grad students spoke of how the economic burden would add to special difficulties they already suffer: extra travel and living expenses, being targeted by white supremacists and Islamophobes, isolation from their home countries and cultures, fear of losing their documentation status.

Students affiliated with the disability rights movement said that SU was just beginning to make the school accessible to all students, and the tax plan barriers would effectively cut access for grad students with disabilities.

Scott Phillipson, president of SEIU Local 200United, described the GOP tax plan as “a kick in the gut for the working class.” An SU School of Law graduate, he said that under that plan he could not have afforded to attend SU as “a hardscrabble Rochester working-class kid,” and that he was honored to be with the graduate workers as they fight for a union.

He pointed out that untaxed tuition benefits, available to all SU employees for their children, are the only way union members who clean the classrooms and cut the grass can afford to give their children a college education.

He ended: “Our dreams are getting squashed. We have to build power in the workplace.”