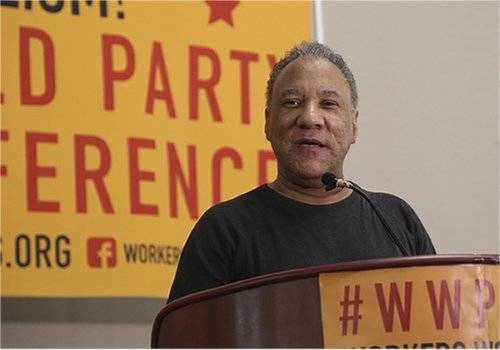 I am going to speak briefly and try to be to the point. It is about the future, the next few months, the next year.

I think that some of the bourgeoisie have nightmares about that because the fact of the matter is the masses are becoming more radicalized. We talk a lot about the youth and it is definitely a phenomenon among young people everywhere. They hate capitalism. But it transcends generations. The more oppressed sections, of course, but actually you can’t confine it to any section or any generation. This worries those in the bourgeoisie who think about the future.

In our open letter that the Party put out under my signature a little while ago calling on revolutionaries to commemorate the 100th anniversary of the Russian Revolution, we suggested a couple of things. Fighting harder for unity, so we can have that united front that Brother Larry Hamm [of the Peoples Organization for Progress in Newark] was talking about. But also using the anniversary to rededicate ourselves to the struggle for socialist revolution, knowing full well that it is not going to happen tomorrow, but we have to put it out there and not treat it as though it is something so far off in the future that it has no significance, no relevance.

The point being that we are entering an epoch in which, because of the capitalist crisis, more and more of our class everywhere are waking up. Whatever situation has frozen their consciousness, that is thawing. They are waking up to the fact that the next important thing that humanity has to do is get rid of capitalism, that otherwise no progress can be made. The clock is ticking. This is the epoch of ending this problem that is holding back all life and all progress on earth.

So we must feel confident as revolutionaries. Not everybody is a revolutionary, we understand that. We don’t critique that. A lot of progressive people, a lot of workers, have different levels of consciousness. Some will become revolutionary, others may never. We will work with everybody as long as they respect the fact that we’re revolutionaries and we will not give up our revolutionary politics.

What is coming? Let’s look back. A year ago we were still spinning from the electoral results, but a lot of interesting things were happening. A lot of anger, hundreds of thousands of people in the streets. Remember the counter-inauguration? We were a big factor. We weren’t the only ones, but our Party was a big organizer of the counter-inauguration on the day, back in January 2017. And essentially the program was socialism versus capitalism.

I can’t remember the last time I went to a demonstration where there were thousands of people and that was the program: socialism versus capitalism. It was quite a sign of the times. And we are still dealing with the fact that hundreds of those demonstrators are facing felony charges.

Then the next day, remember those huge women’s marches, all over the world? It was incredible. And then there were the demonstrations at the airports in solidarity with our Muslim comrades. The resistance from the street seemed to have some steam going. But then it kind of dwindled, with the exception certainly of Charlottesville and what our comrades are doing in Durham.

We had great hopes for May Day 2017. We put out a call for a global general strike, which even though that didn’t happen, it still was a good idea. It did seem as though the fear — coming from Trump, ICE, the police, the bourgeoisie — may have been a factor in keeping some of the immigrants from coming out, understandably so. And what has happened since then? The attacks have increased. Immigrants are still being rounded up. Attacks on all sectors of the workers.

Everything that is left — education, housing — it seems like the Trump regime has appointed somebody who is there to dismantle them. The white supremacists, the neo-fascists, the misogynists, that is a big issue.

We understand that some people wanted anything other than this misogynist, racist monster of a billionaire. We understand that and I hope that we are diplomatic when we talk to our friends about that. We don’t need to beat them over the head to explain the Demo-publicans to them. But we have to be honest and explain to people in the best way we can that the Democratic Party’s mission is to smash the radicalization of the working class and the oppressed.

This is not rhetoric, this is a fact. It is deliberate. This is the purpose for their existence: to hold back the workers and oppressed and hold them hostage to the ruling class.

That fact is going to get bigger and bigger in 2018. What is coming next year? What can we look forward to? The political situation is so unstable and so wild, added by the growing instability in the economic situation, anything could happen. Impeachment. Coup d’etats, resignations, wars, you name it. Get ready. The political and economic situation is like a fool riding a drunk horse. It could run anywhere.

That is their solution. We cannot let them sweep the independent radical mass movement off to the side. We don’t know what opportunities are going to come. But we’ve got to look at the big view right now and deal with the challenge that we are facing.

Some of you know we are reorganizing our Party, we are reorganizing our leadership. Hopefully that will mean better decisions, better deliberations, more information, etc. But we shouldn’t wait. Let’s take the week that begins with the King Holiday, which is Monday, Jan. 15. In your localities you know that sometimes coalitions organize events on that day. We support it, or bring we have there.

Then at the end of that week there is another anniversary: January 20, the first anniversary of the inauguration, when we had our great demonstration. Maybe that week can be helpful. Think about some themes, what themes can we use. Work with everybody. As long as we can have our revolutionary politics, everybody is welcome, we don’t want to monopolize it. Think about some political themes that we need. Like “Workers’ solidarity, not white supremacy.” This is the choice that Trump is giving the working class: give up workers’ solidarity, choose white supremacy.

Let’s see who wants to move, who is ready to fight back. There are no guarantees. The weather can affect it, especially in the Midwest and this part of the country.

Moving on, there’s International Women’s Day, May Day. We have got to get ready. Think about Peoples Assemblies. Peoples Assemblies versus Democratic Party meetings, where people organize on a local or regional basis. We have got to begin carving out a revolutionary pole for the next year of struggle so we are not just chopped down and swept away by a bourgeois, phony-baloney, hypocritical Democratic Party.

Nothing is guaranteed. The only thing that we are really guaranteed is that history is on our side. Everything else is just for trying. Let’s see. Like our comrades in Durham, we have to love each other, have each other’s back, protect each other. And if you need to, forgive each other. In this way, we will forge a revolutionary party that is central to a revolutionary movement, stronger and stronger and more determined. If we do it right, I know that some of you out there will be leading the revolution. It won’t take another hundred years.